STATESIDE: Boundaries between NATO and Russia 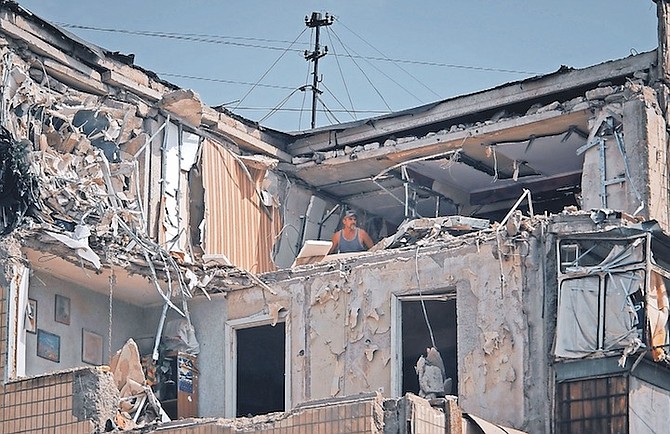 INSTANT scholars, historians and strategists are popping up everywhere in Washington, New York and all over television these days. There’s real red meat for them on the table now. And that red meat is the ongoing war in Ukraine. Increasingly, the current conventional wisdom holds that this brutal, indiscriminate conflict is likely to last for several more years, and that whatever its ultimate resolution, at least tens of thousands more innocent non-combatants will almost certainly suffer grievously or die.

It’s a really depressing assessment, made all the worse by its widespread “objective” acceptance by some of the leading figures and publications in the American foreign policy establishment.

Here’s what the leading US foreign policy publication, Foreign Affairs, had to say in a recent article. The author is discussing the boundaries that are evolving between Russia on one hand and NATO on the other. These boundaries represent basically a kind of subtle, almost subliminal mutual understanding of what Barack Obama once infamously called “red lines” in another conflict (the Syrian civil war) on another continent. Red lines are escalations in military confrontations that are known to be unacceptable to one of the combatants or the sponsor of one of the combatants.

“Russia, Ukraine, and the West have similarly adjusted their behaviour as they learn about the goals and pain thresholds of the other side. Escalation is not infinitely flexible, however. Some limits are more important than others. To prevent a wider war, the NATO allies and Moscow have carefully avoided direct, sustained military clashes between their own personnel. This is why proposals for no-fly zones are different from those calling for deadlier weapons.”

No-fly zones would be enforced by US and NATO aircraft, pilots and support staff on the ground. It’s easy to see why implementation of these measures would risk direct combatant roles for Western military personnel. At the same time, however, the chief of staff of the US air force said just a couple of weeks ago that there are ongoing discussions in Washington and Brussels about how to reinforce Ukraine’s air forces in the face of continuing Russian air superiority.

“I can tell you that if we transfer aircraft to the Ukrainians, they will not be Russian-built planes,” said Air Force General Charles Brown Jr. at a conference last month. “But I cannot tell you exactly what the makeup of our assistance will be.” Training for Ukrainian pilots on the operation of unfamiliar aircraft is reportedly under active discussion, though American Joint Chiefs of Staff chairman Gen. Mark Milley said “there’s been no definitive decisions on any of that. But we are examining a wide variety of (assistance) options, including pilot training.”

As we have discussed previously in this space, American and Western involvement in this ongoing war is steadily rising, despite the “boundaries” discussed in the Foreign Affairs article.

The other red line noted in the article is Ukraine’s borders with NATO members, particularly with Poland.

“Ukraine’s borders are the other universally understood limit. Even if they are disputed by Russia, they provide a powerful and intuitive way to contain the war. In March, for example, Russia fired missiles near the Polish border but stopped short of targeting supply routes in the territory of a NATO member. Such restraint did not go unnoticed. Russia continues to avoid striking NATO members, despite having the capability.”

This is not to suggest that an article in a leading foreign policy publication represents immutable American policy. But Foreign Affairs has often been used to unofficially expose just such policy proclamations, and the public statements on the record of key American officials support this interpretation.

There’s more. Speaking to reporters recently, US national security adviser Jake Sullivan said that if he were Ukraine’s leader, he would be aggressively seeking more Western military assistance, just like Volodymyr Zelensky has been doing all year long.

“Who wouldn’t do that if you were a patriot for your country?” Sullivan asked reporters. “And we have not undersupplied Ukraine in response. We have moved billions of dollars of equipment to Ukraine at lightning speed, and we will continue to do so.”

A final point in the Foreign Affairs article makes clear that the thinking it reflects very likely does represent US policy, since it offers a reason for what many observers have described as a desultory pace of US and Western material reinforcements to Kyiv.

“Some might think that Western governments made a mistake by not sending Ukraine lethal aid at the beginning of the invasion. But because limits evolve during war, being cautious was the right move. Notions of escalation evolve through trial and error. What NATO gets away with today is different from what it could do in February 2022. The West’s evolving approach to Ukraine — with its gradual expansion in volume and lethality of aid — has allowed it to find the forms of escalation that matter to Russia.

“Much of wartime escalation is murky territory. But by going slow, the West can tease out the ambiguities without starting World War III.”

While it has not yet begun in earnest, this kind of policy thinking is bound to engender resistance, perhaps within just a few months as cold weather returns to the northern hemisphere. There will be critics of America’s remote-control war policy and implementation. Advocates will cite the early years of the Vietnam War; the US and allied response to the genocide in the former Yugoslavian province of Bosnia thirty years ago; American fly-by involvements in Libya, Yemen and Syria, and aspects of our military activity in Iraq and Afghanistan.

Critics will charge that the US public will cynically, even casually, accept outcomes when tens of thousands of foreign combatants and civilians perish or are forcefully dislocated in a conflict the US sustains with arms and training without the public relations hit that would result from the reporting of large numbers of American casualties.

If he is paying attention – and we know he is – Vladimir Putin is counting on this. Especially if inflation continues to ravage the lifestyles of ordinary Americans, headlines announcing the accumulation of $10 billion in US military assistance will lead to public questioning of whether that money could be better spent at home. This will be accentuated by a likely continuing stalemate on the ground halfway around the world involving areas many Americans would still have difficulty identifying on a map and whose US-based resident expatriate populations are likely far removed from most voters.

Just last week, the Russian defense ministry accused the US of edging closer to one of the red lines noted in the Foreign Affairs article, while at the same time continuing its attempts to erode public support in the US for continuing high levels of American logistical support for the Ukrainian military.

"It is the Biden administration that is directly responsible for all Kyiv-approved rocket attacks on residential areas and civilian infrastructure in populated areas of Donbas and other regions, which have resulted in mass deaths of civilians," the Russian defense ministry said in a statement.

"All this undeniably proves that Washington, contrary to White House and Pentagon claims, is directly involved in the conflict in Ukraine."

Are the US and its Western allies engaged in fighting a “proxy war,” as the Kremlin repeatedly alleges? The Americans will need to be especially attentive to this charge, and to the dangers it poses for public support for NATO engagement in Ukraine. 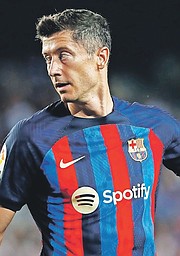 DROUGHT IS OVER FOR SOCCER FANS

Hundreds of millions of soccer fans around the world could be heard exhaling in recent days. Most of the most powerful European leagues inaugurated their 2022-23 seasons this past weekend, with Spain and Italy launching on the day after tomorrow. For most, this represents the earliest seasonal start ever, because there will be a month-long break in league play during November and December to accommodate the World Cup to be played in Qatar, where traditional summer match dates would be insupportable in the desert heat.

As usual, English teams led the way in massive spending to import new and expensive talent to bolster their already dominant squads. And while recent luminaries Lionel Messi (spectacular goal) and Cristiano Ronaldo (on the bench) began their seasons in different fashion with their same teams, Poland’s Robert Lewandowski (Bayern to Barcelona) and the Norwegian Erling Haaland (Dortmund to Manchester City, where his father once played) executed spectacular transfers. The long summer drought is over for the fans.

No need to be concerned, Joe Biden and his band of corrupt family members and supporters will "stop" the Russian onslaught.

Winter is coming and the EU NATO partners will begin feeling the effects of their dependence on Russian energy. What then? Will they introduce a new green energy plan with lots of hand outs for solar and wind production? Or maybe they will provide the citizens with a tax credit to buy electric vehicles.