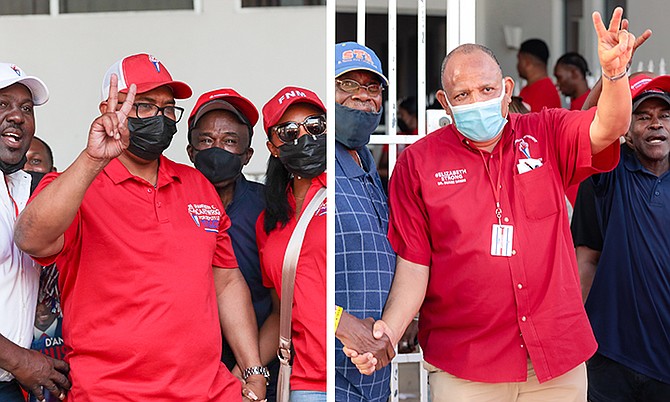 According to unofficial results, Mr Cartwright won the deputy leadership race with 332 votes, while his opponent Adrian White received 101 votes.

Mr Cartwright’s candidacy got a boost after he won St Barnabas, an inner-city constituency, in an election won by the Progressive Liberal Party. His feat brought attention to what supporters say is his conciliatory and hands-on approach to constituency representation.

In the chairmanship race that featured two prominent former Minnis administration cabinet ministers, Dr Sands held off Mr Johnson and told The Tribune afterwards that he is jubilant and ready to get to work.

“I think the first thing is to take stock of our situation at headquarters and begin the process of building on what we had there to make it more responsible to the needs of community associations so they can build and flourish,” he said. “We have to also convene a conclave to look at our defeat in September and look forensically at what went wrong.”

Mr Cartwright said the FNM’s convention results mark a resurgence in the party.

A total of 101 people offered themselves for party positions at the FNM’s three-day convention, which ends Friday night.

The deck chairs on the Titanic have been re-arranged

You mean the S.S. Minnow. LOL

Finaly some intelligence I might consider realligning - with Minnis gone - hopefully for good!

You can't possibly be talking about Sands. He proved just how unintelligent and detached he really is from the Bahamian people by falling for all of the scaremongering tactics pushed on our nation by the Chinese Communist Party controlled W.H.O. and its affiliate the P.A.H.O.

Sands is also as politically tone deaf as they come. Small wonder Davis, Cooper, Mitchell and others are all celebrating his election victory at the recent FNM convention. LOL

Sharks swimming in shallow water and poisonous snakes in the Garden.

Every time the Sands appear I remember Mr Frank Smith

I take the assessment is that both FreeFish-Eyed Minnis, along with his deck chair, got tossed overboard and both are somewhere out there floating in de UK Colony's seawaters?
Such recovered arm chair, could fetch in $25,000 range, considering a recovered Titanic deck chair, fetched $150,000 at auction, ― Yes?

This marks the end of Minnis for sure

This is a good trio to start over with. Pintard & Cartwright has a good balance of youthfulness, experience & networking. Doc speaks with measured authority & influence. He can take on Fweddy.

Now, it takes mobilization of the base & building a new game plan for 2026. Pintard will have to be charismatic & crafty to battle the PLP juggernaut in Parliament. Cartwright has to extricate himself from that Beaches&Parks mess. He has to put that to rest.

You've always been delusional enamoured by Sands. God only knows why.

After two more years of PLP governance, these guys will look like Minnis did five years ago. So far Davis has been able to steer the ship and keep the SS PLP on course, But mutiny is afoot. Firstly from the non-submitting married women who are getting more aggressive with their demands that Davis pass the marriage rape law. This will impact less than 1 percent of married spouses in the country and mostly those with ulterior motives, then there is the minimum wage bill, which too, will be divisive. First is now the right time? How many businesses can afford an increase and by how much? Should the increase be phased in like was done the last time? Will a minimum wage increase lead to more inflation and unemployment? Then there are the workers who say they were promised a minimum wage increase and they want it. Never mind the impact on inflation or unemployment they just want to see more &$ in their paychecks. Then there’s the marijuana bill that will definitely lead to greater separation of Church and state. But the bill cannot be left lingering for another five years. A lot has to be ironed out. Will the PLP or FNM oligarchs hog up all the licenses and permits to grow and distribute? And those who have criminal records for small amounts of marijuana. Will some amounts of recreational marijuana be legalized o decriminalized? Is The Bahamas already behind the rest of the region and even the USA? What impact will marijuana legislation have on crime and gang activity?

A wage increase is a must for The Bahamas. Everything is rising but your salary and in order to balance the curve a salary increase is a must or else we will all have a major problem. No type of wage adjustment in years but every year there is more taxes and more placed on the same low salary.

Obviously you confusing ‘wage increase’ with ‘minimum wage.’ The minimum wage is the minimum amount a person is allowed to be paid when he/she enters the job market. And although the minimum wage may not have increased in a number of years, there have been wage increases. Part of the problem in The Bahamad is there is not enough industry to hire different levels of line staff and managers so most jobs still pay close to or affected by minimum wage. And there are many small businesses whose payroll is their major expense so a significant increase in payroll can determine the fate of those businesses. A minimum wage increase may be imminent, but a reduction on the cost of living will be more effective.

wage increase, cost of living is high regardless of payrolls which are decided upon by the various employers.

No gov. has initiated a cost of living increase but vat increases and so does all bills .