INSIGHT: Why do projects wither on the development grapevine? 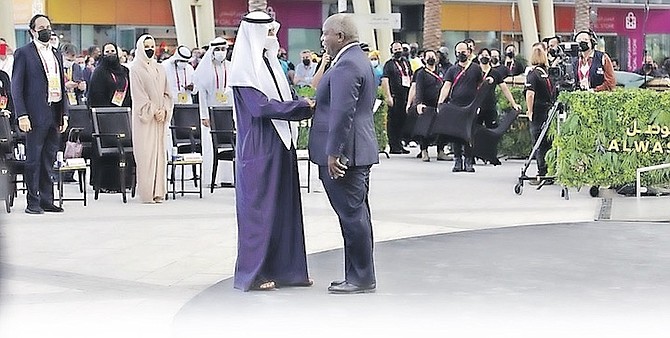 PRIME Minister Philip “Brave” Davis during his visit to Dubai.

MASTER winemakers know that producing a grand vintage depends on more than just the raw materials. No matter how lush the soil, how old and precious the vines, how ideal the weather in a given year, if you wait too long to harvest, the grapes will wither and die on the vine. In wine as in life, timing is everything.

In The Bahamas, we possess in abundance the raw materials necessary to achieve tourism greatness: stunning limpid waters, outstanding white-sand beaches, resplendent coral reefs and teeming marine life, a climate that is the envy of the world. We are further blessed with all the requisite conditions in terms of geography, political stability and regulatory flexibility for a host of other lucrative industries to thrive. We bring millions to our shores each year and promote The Bahamas as a great place to invest.

So, why do so many projects continue to wither and die on the development grapevine? Perhaps it is because we have been too lucky, too blessed. Maybe the raw materials and natural advantages we enjoy have spoiled Bahamians – or at least, those Bahamians at the top. Perhaps we have been cursed by not having to struggle quite enough.

I say this because, while other nations in the region exert themselves mightily to attract new foreign direct investment, our elite flaunt an attitude of entitlement, assuming developers will continue to appear out of the woodwork, hat in hand, begging for the chance to give us money and create jobs. Where our Caribbean neighbours empower their people in ownership roles in the largest industries, we do the opposite by making it illegal, with Exchange control laws, for Bahamians to own one share in all the publicly traded investors that come here, or worse still allow companies like Emera (G B Power) to claw back all the shares once owned by Bahamians. We are contented with a trickle-down approach that sees Bahamians relegated to the role of perpetual wage labourers, because the salaries at a given hotel or industrial facility are deemed generally “good enough” to allow people to scrape by, so politicians can avoid the inconvenience of civil unrest.

Meanwhile, our politicians just love to be flattered and feted by investors, made to feel as if they are the gatekeepers, the patricians, the local aristocracy. Would-be developers must bow down and kiss the “ring of power”, to the delight of puffed-up ministers and obdurate civil servants. In return, we promise a developer the world – and without fail, proceed to severely under-deliver.

Our corporate lawyers love to feel like big power brokers, top level facilitators for both the developers and the politicians. They too relish the song and dance of protocol, the procedural and policy foreplay, the ceremonial pilgrimage to the Office of the Prime Minister.

All of which is completely unnecessary, mostly illegal, and culminates in a nefarious document called “Heads of agreement”, which – most investors don’t know – isn’t really worth the paper it’s written on. Developers are made to jump through the hoops and navigate the obstacles put in place by fictitious constructs like the National Economic Council (NEC), the Bahamas Investment Authority (BIA), and until recently the Bahamas Environment, Science and Technology (BEST) Commission, all of which are made-up, pretend non-entities whose decisions are meaningless in the eyes of the law, and whose approval is totally unnecessary for any development to proceed.

For decades, we have entwined ourselves in more and more illegal, non-statutory, parallel dimension procedures of a political and arbitrary nature, often terrifying developers both domestic and foreign.

So, the ripe, juicy grapes of many a promising investment remain unpicked, slowly strangled by the ravenous, ravelling weeds of invasive red tape, until they either wither and die (as did the $1bn Tractebel LNG plant in Freeport) falling unceremoniously from our vine, only to spring up in the generous soils of another, competing jurisdiction.

What investors and all of these politicians and power brokers and lawyers and facilitators and hooker-uppers don’t seem to understand is at the end of the day, in any event, each project must go through the ordinary statutory regulatory processes and agencies which are already – appropriately and correctly and necessarily – quite numerous.

Oh, irony of ironies, how I miss the good old days where an investor would be taken once or twice to the Prime Minister and a select few in the Pindling administration, and walk away with an “approval in principle” letter. Basically a gentleman’s handshake.

Then, like now, applications would still have to be made to the statutory agencies. The Executive branch of Government must learn that it cannot get around the laws passed by Parliament which creates the real regulators. This is the proper, legal process.

The current, superfluous nonsense only leads to investor frustration, extraordinary and unnecessary expense, bad-mouthing of The Bahamas internationally, name-calling, blame-gaming, political gamesmanship and perpetual torture for the real regulators who are often without the proper human resources, without the proper technical support, without the political support to make their roles as legislated by Parliament meaningful, effective and efficient. All it does is waste valuable Cabinet time and investor money. Of course, it also leads to the lawyers making a great deal more money, which may be a clue to the longevity of this farce, given that in all administrations, the Cabinet is stuffed with lawyers.

Why not just stop this charade of magical Heads of Agreements and fake approvals from “shadow” entities which mean nothing in law, and which can therefore move the yardstick as they see fit, tormenting and discouraging the investor who cannot understand the ever-shifting ground rules, while opening up a wide and sordid space for all manner of bribery, extortion and solicitation? That is, of course, unless an administration actually wants to pass all of this puffery into law, in which case they should just do so.

We did this in 1955 with the Hawksbill Creek Agreement, which created a One Stop Shop, that is the Grand Bahama Port Authority, which, before political interference and discrimination in the late 60s and early 70s, gave birth to the Magic City.

I urge the current administration once again, to allow the GBPA to be the One Stop Shop for Freeport and to cut away all of the additional layers of central government legislation and policy red tape which have been strangling Freeport since 1969. It goes without saying, that at the same time, the GBPA must be held accountable to be the developer and responsible local government administrator of Freeport as it successfully was originally and as it can be again. This is a very simple fix.

If no such Act is to be passed, why not just have the investor, whether domestic or international, meet as appropriate with some of the relevant Ministers so they can get some comfort, understand the legal process, have a rational roadmap and appreciate clearly what they need to do to achieve approval?

Then sensible lawyers can guide the investor from application to application, meeting the transparent and rational demands of the real regulators, having their project adjudged on its merits, improving the legitimacy of any project according to the formulas, factors and dictates Parliament has set for any particular permit.

Time and again, Save the Bays, Responsible Development for Abaco, reEarth, and other such advocacy groups have proven, to the frustration of government and developers alike, that unless there is compliance with the statutory prerequisites, projects are doomed to being harried, harassed, litigated against and forced to fight devilish rearguard actions to stay alive given that most are being financed, most have project deadlines and timelines, and most are publicly traded companies these days.

Multiple layers of safeguards, both official and civilian, are in place. There is nothing to fear from following the law as it is.

It is the sound of one hand clapping! For the investor, it is like trying to nail Jell-O to the wall. I cry shame on the politicians and lawyers who rejoice in playing these games.

I have railed against Heads of Agreements for decades although, driven by clients’ instructions at times, I too have had to kneel and prostate myself and walk the yellow brick road, participating in this thoroughly ridiculous Wizard of Oz dramatic production at the Office of the Prime Minister, sitting for days and days drafting meaningless, non-binding Heads of Agreements. Never are the promises therein kept, never are the timelines maintained, never are the regulators sufficiently empowered to be able to do their jobs as efficiently and effectively as they could. Worse still, never are the developers held accountable.

What is the result of all of this for a place like Freeport, with the infrastructure for at minimum 250,000 people and all the necessary conditions for an economic explosion?

While the political pantomime continues in Nassau, the once-glorious Magic City is itself withering and dying, its abandoned high-rises and deserted highways crumbling to dust. For the most part, the imaginary gatekeepers, for example most BIA directors, never studied Freeport to see what investment opportunities were on offer.

It was recently claimed Middle Eastern investors have no interest in Grand Bahama. The response should be to invite them to high level meetings and make them aware of the amazing untapped potential, offer to amend the Hawksbill Creek agreement as necessary and roll out the red carpet. We could have Aladdin’s carpet flying over the Magic City – and this goes not just for my Bedouin brothers, but also Chinese, Koreans, Taiwanese, European, American, and Latin American investors.

So many people love The Bahamas but are put off by our backward way of doing things. No investor wants to be dropped into an ever-shifting maze of confusion and told to find their own way out. It’s time to change our investment environment and to say what we mean, mean what we say and put it into effect through the regulatory regimes enacted by Parliament, not through political strongmen posing as Harry Houdini and promising to wave the magic wand and make all an investor’s dreams come true. Overpromising and underdelivering, over and over again.

Developers: Don’t be sidetracked by empty promises and vacuous public statements; there is no magic wand. No project can happen without the necessary legal permits and approvals.

My brother lawyer, fellow Queen’s Counsellor, and now Prime Minister, Mr Davis: I urge you to cause new wine to spring forth from what is today a forgotten, but still tried and tested formula for investment success in The Bahamas. Let us nurture the roots of our abundant vines so that they bring forth beautiful grapes that explode into a delicious vintage of opportunity for both Bahamians and international investors, and importantly, send my Bedouin brothers to Freeport!