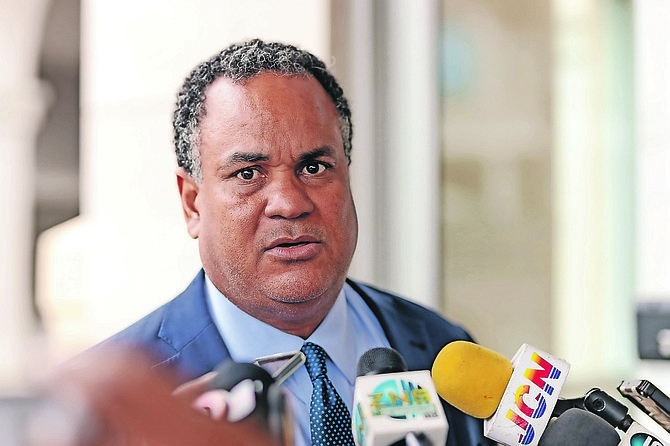 The Minnis administration chose not to implement the tax on web shop patron winnings because it was “too complex” and could have driven gamblers back into the underground economy.

Well-placed sources, speaking to Tribune Business after Michael Halkitis, minister off economic affairs, confirmed that the Davis administration has also decided not to pursue the tax’s implementation, said defining what comprised patron winnings was more complicated than initially thought especially if they gambled multiple times - losing as well as winning - at one location.

“The patron tax was messy, it was cumbersome and it was difficult,” one contact, speaking on condition of anonymity, said. “And unregulated gaming businesses were always popping up. If you could win 100 percent of your winnings underground, the fear was it would drive people out of the regulated economy and back into the unregulated economy.”

As a result, the Minnis administration elected not to implement the patron tax. It also ran into significant web shop industry opposition, including multiple legal challenges, and the former administration ultimately settled for increasing the tax on operators’ net gaming revenues via a two-tiered structure that expanded government revenues by around 50 percent - from $22m to close to $33m.

Mr Halkitis, meanwhile, confirmed that the Government is “doing away with” the patron winnings tax on the basis that the industry is already heavily taxed. “The patron tax, as you may know, had never come into effect. It had not come into effect and so we decided that we will do away with it,” he said.

“It had been the source of a legal action, as well as a lot of debate. So we decided we’ll just do away with it. The gaming industry, if you look at it in terms of their taxation, not only versus our casinos but versus other businesses, is very, very heavily taxed and so, we believe that it’s just better to do away with it.”

Some observers, though, will likely attribute the Government’s move to the power and influence of the web shop gaming industry. They may also argue that gambling, given that it is viewed as an anti-social activity worldwide, should be taxed heavily as a matter of good public policy.

The former administration had sought to implement the patron winnings tax on January 1 last year, following several previous delays, but then ended up pushing it back several times and, ultimately, never followed through.

The tax would have seen a five percent levy paid by patrons on winnings up to $1,000, and 7.5 percent on anything greater than $1,000. It was projected to generate between $10m-$15m annually in extra revenue for the Public Treasury.

While a relatively small sum in the overall fiscal scheme of things, it would have certainly shrink gamblers’ winnings at a time when they were hoping to land every cent possible due to COVID-19 related high unemployment and income cuts.

Mr D’Aguilar added that the government had decided to focus this levy solely on lottery/numbers operations because it was too “complicated” to calculate the winnings from online casino spinning, indicating that Bahamian gamblers had got off relatively lightly.

The ex-minister said the comparable winnings tax rates in Jamaica and Barbados are 15 percent and 20 percent, respectively. In the US, he added that the federal tax rate was 25 percent, with state and local taxes on top of that.

Mr Halkitis, meanwhile, yesterday said the Government will make changes to the Public Procurement Act enacted by the previous administration. “We’re looking at those Acts. We’ve had a lot of legislation that was pushed through and we have to make sure that legislation makes sense,” he added.

Acknowledging that “transparency, accountability and order” is needed “in government operations”, Mr Halkitis said it also “needs to make sense so the government can operate”.

He added: “So we’re looking at a slew of legislation to make some changes to make sure that we maintain transparency, but government hands are not tied, and you’re not crippled, in terms of when government needs to procure and do things, especially on an urgent basis.

“So we’re looking at all of that, and whatever changes are made will come before Parliament and it’ll be all done in the full light. The law was passed early in 2021. It was implemented on September 2, 2021, conveniently two weeks before the elections. We will report as necessary. We’re complying with the legislation, and the reports will be made.

“That procurement legislation was implemented into effect on September 2, two weeks before the election. You have a former government that was procuring straight up to that. No training, no manuals, no regulations, all of that we have to implement now,” Mr Halkitis said.

“So we should just appreciate that when you do transformative legislation and wide-ranging legislation like that, you have to train the public service to be able to implement it, and you have to have in place regulations and manuals.”

Former RBDF officer Johnson??? was well trained by IDB and other international institutions for procurement. I think we should return under Colonial Rule as at least there would be accountability and adherence to international regulations otherwise Banana Republic applies.

The Christian moral fiber of the Bahamas expected ethics from from a Minnisitis but we got a Holy shock. Brave to the rescue.

Gambling addiction is rampant throughout the Bahamas today thanks in large part to the numbers rackets being run in web shops and online by criminal racketeering thugs like Sebas Bastian and Craig Flowers. And our country is paying an ever growing dear price for the many social-ills and violent crimes that so often afflict societies in which gambling addiction is a most serious problem.

Davis needs 'a light bulb moment' (an epiphany) in which he realizes the gambling enterprises operated by undesirable thugs like of Sebas Bastian and Craig Flowers either need to be put out of business by legislation or taxed out of business (taxed to death). And to think Alfred Sears endears himself and partners with people like Bastian and Flowers. This is why Sears was appointed Minister of Works and Utilities....to facilitate the real estate development (money laundering) interests of Sebas Bastian.