PRIZED OFFICER SHOT BY POLICE: Why did marine who was trained to calm situations lunge at cop? 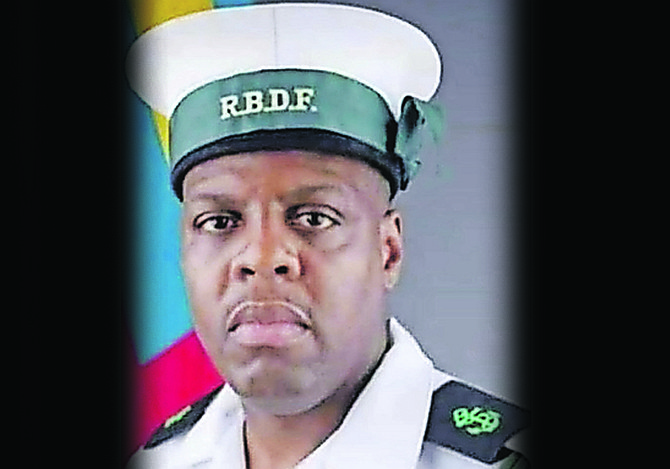 Rodney Adderley, who was shot dead by a police officer.

A police officer shot and killed a Royal Bahamas Defence Force officer who allegedly “charged” at him and tried to disarm him early yesterday morning.

The deceased is 39-year-old Rodney “Persian” Adderley, a leading seaman in the Royal Bahamas Defence Force. Friends and co-workers have been left in shock at the killing of the “humble” seaman and have questioned the police’s version of the events.

However last night in a joint statement, the Royal Bahamas Police Force and Royal Bahamas Defence Force said body worn camera footage had been viewed by both agencies and was “consistent” with the account from officers.

“The investigation of this shooting incident is being conducted jointly by the Royal Bahamas Police Force and the Royal Bahamas Defense Force,” the joint statement said. “The video footage from the police body (worn) camera was secured and viewed by both agencies and are consistent with the accounts of the officers.

“The Royal Bahamas Police Force and the Royal Bahamas Defense Force want to assure members of the public that both agencies have a long and friendly relationship of mutual cooperation and will continue to work together to keep our country safe.

“Once the investigation into this incident is completed, the file will be forwarded to the Coroner, who will conduct an inquest into this matter. We look forward to the inquest in this matter being conducted as soon as reasonably practicable.”

According to reports, the incident took place on Dunmore Avenue in the Chippingham area while officers were on routine patrol.

Police said shortly before 4am on Monday, officers were alerted to a complaint about a suspicious vehicle parked near a vacant lot on Dunmore Avenue.

Officers were subsequently dispatched to the area and upon arrival, they noticed a man in the vehicle.

After being ordered out of the vehicle, the man “charged” at one of the officers, police said.

“The officer attempted to evade his oncoming aggression. However, the suspect continued and attempted to disarm the officer,” police said.

“Being aware of the threat to his life, the officer discharged his service weapon at the suspect, hitting him in the upper body.”

Emergency Medical Services were called, but later pronounced the victim dead. Her Majesty’s Coroner also visited the scene and was briefed on the initial facts.

Yesterday, many friends and family members reacted to news of Adderley’s death, calling for more answers behind the incident.

Adderley’s longtime co-worker, Kimsley Ferguson Jr told The Tribune yesterday that police details of the shooting did not fall in line with his character.

Describing the 39-year-old as a quiet man who was professionally trained to handle confrontations, Mr Ferguson said he found it mind boggling the marine would just attack an officer.

He added that he didn’t believe the police’s version of the story.

“I don’t think that scenario happened at all,” the RBDF marine said yesterday. “Persian was one who trained both marines and police to defend themselves against those same tactics. “His quiet and humble demeanor wouldn’t go into attack mode. He was more so a voice of reason.

“Persian has served 13 years in a job he loved. He completed many overseas courses with distinction and was able to return home and share the knowledge amongst his comrades,” his colleague said.

The RBDF marine said family and friends have been robbed of a good person and are now searching for answers.

“I’m honestly still in shock. It seems somewhat surreal because I know the type of person... “He was quiet and reserved and always spoke positivity to his peers and subordinates. He was a humble Christian that always used an opportunity of conversation to speak life into someone along with words of wisdom from The Bible,” Mr Ferguson added.

The RBDF posted a statement of condolences to Adderley’s family on Facebook yesterday.

The agency said Adderley enlisted in the RBDF as a member of New Entry 45 on May 15, 2008. Upon completion of new entry training, he was drafted to the Squadron Department. He was later drafted to the Military Police Department on October 25, 2011 and to the Southern Command on July 20, 2020 where he served until his death.

“A dedicated and committed individual, Adderley was a highly qualified training instructor,” the RBDF said, noting he took part in numerous training courses including taser training; close quarter combative system; use of force continuum and non-lethal training, among others.

He was a recipient of the Minister of National Security Commendation for his role in the planning and execution of Exercise Trade Winds 2018, and humanitarian efforts on Abaco after the passage of Hurricane Dorian. He was also a recipient of The Commander Defence Force’s Commendation as well as a certificate of appreciation from the Royal Bahamas Police Force for joint operations.

“Adderley served any department that needed training for its personnel. Training is what he enjoyed and was very passionate about. He was quiet and humble but always sought to get the job done while ensuring that those with whom he interacted benefited from his knowledge and experience,” the RBDF said.

The agency extended condolences to Adderley’s family on behalf of Commodore Dr Raymond King and the entire force.

Police said the findings of Monday’s shooting will be forwarded to the Coroner’s Office for a coroner’s inquest.

This is a matter of Public Trust … release the Body Cam Footage to the Public to enable them to draw their own conclusions … as is done elsewhere in World.

There are far too many incidents such as this with fatal and/or egregious consequences. Why did the officer draw his service firearm in the first place? Is that the normal approach to a man in a "suspicious" car at 4am? Why hasn't his family at least been able to view the recording? Aren't body cams usually employed to protect police and the public they serve? So far the RBPF haven't fulfilled their oath of office, and it appears their idea of a 'co-operative community' builds on fear rather than trust.

... one thing is absolutely certain, those in the RBDF and RBPF need real psychological evaluations for employment or re-enlistment. Lots of psychos in both arms of service!

The truth behind the cause of this incident will never see the light of day as the public's memory of it fades with each day that passes. Put this one on the miles high rotting pile of police shootings to be investigated in the next century.

Two weeks ago they told us a man shot twice in the head was a robbery...

Dead man tells no tales. In the time of covid19 with so much deception, extorsion and black mailing going on these days, truly I do not trust either of these agencies, truthly, I do not trust officials anymore, not at all. What does family members say, have they seen the body cam footage (if there is truly any at all)?

Much disappointed in a minister thought be de premiership's ideal pick as security minister who must now as in immediately, order de release of de unedited Body Cam video's full content capture on film and everything else like this and that is a ""must release** to reset de minister's credibility straight, ― Yes?

I advise sane responses to this mess. . .TALKIN FOOLISHNESS EEN GER DO NUTTIN BUT MAKE PEOPLE MADDER THAN THEY ARE ABOUT THEY FAMILY MEMBER GETTING KILLED!! None er yinna know a dang thing about what happened but yinna them talkin all kindda fool!! Yinna een gat nuttin better ta do aye?? Act like yinna gat some sense. . .STOP TALKIN FOOL. . .YA HEAR!!!

Not right moment with all policeman's shooting for de Guardian Talk Radio station to decide on moving away from its News Talk Format, over to a format, why listeners' need stop drinkin' Soda and everything else like this and that along increasingly insulting and banning callers like Comrade Sparky, who's not in agreement de positions taken by de shows chatter hosts.
If stations chatter hosts are more qualified to offer their own personals lifestyle advice, de station's program manager should hustle them over to a more suitable Saturday or Sunday timeslot, ― Yes?

Sparky and Anyoine should both be banned from the airwaves. Neither is worth listening to as they are so wrapped up in themselves and waste air time.

Maybe he was in fear for his life?

Truth is Minister Wayne Munroe QC, a policeman who gets caught stealing a bologna chub from a grocery store is 100 more times likely to face swift justice than will a policeman, who shoots a member from De Popoulaces'Commeners' and everything else like this and that, which makes it that more compelling to immediately release de video, and not to hold back, preventing its release, until after some behind de scene prolonged, internal investigation is completed.
Let's hope de original video is placed where it cannot be tampered with, or mysteriously gets tampered with or deleted or forever varnishes?
What about de evidence video's,chain of custody, even before it suddenly landed smack on de security minister's desk, and, is it de original evidence video,** ― Yes?

I wish they would dispel this myth that police officers are supposed to kill aggressive people. The guidance is to "stop" them doesnt mean kill and is not intended to be "kill". It is not ok. They know. The white man armed with a shotgun in Abaco who fired several rounds at police to put them in fear for their lives but somehow he managed to survive... how did that happen? but this man sitting in his car is dead?

Disisyours. I understand that the white man in Abaco fired his shotgun up not the air and not at the police officers.. Now I was not there but i was told this by an Abaconian who was very close by.