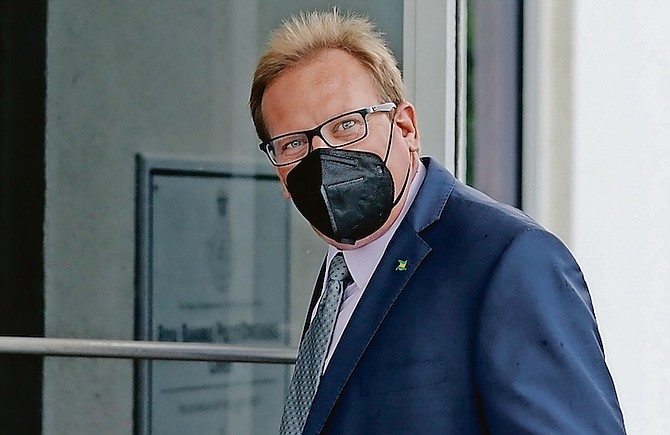 ATTORNEY General Ryan Pinder says the government is reviewing several key pieces of legislation, including the Court Services Bill, which it hopes to pass in Parliament to improve the nation’s judicial system.

Mr Pinder was speaking at a virtual ceremony yesterday to mark the opening of the 2022 legal year. This year’s theme is: “The Centrality of Justice to the Way of Life in The Bahamas”.

During his address, Mr Pinder committed the government to ensuring the judiciary has the resources it needs to effectively administer justice and noted several initiatives are being discussed to assist in this regard.

“Some of the legislative initiatives we are reviewing with a mind to advance to Parliament include the Court Services Bill, amendments necessary to expand the jurisdiction of the Magistrate’s Court, legislative reforms for the Juvenile Court and amendments to the Evidence Act for remote trials,” the Attorney General said.

“We can undertake initiatives legislatively to allow for the efficient administration of justice and we look to advance any agreed amendments in this regard hopefully as a compendium of bills that will have a meaningful impact.”

He also said discussions are continuing regarding the establishment of courts to hear juvenile, family, sexual offences and commercial matters and added that work is underway to find a suitable location to house the respective courts.

“The move towards specialty courts is one that most of us as advocates, enforcement and the judiciary can agree will contribute to the proper, and effective administration of justice,” Mr Pinder continued.

“His Lordship and I have had numerous conversations on this matter and have begun identifying suitable locations in order to establish a Juvenile Court, Family Court, Sexual Offences Court and Commercial Court.

“The use of specialty courts, in both sensitive community matters and for commercial matters will not only give a focused and dedicated avenue for the administration of justice in these areas, but will also allow other matters in the courts to function with greater efficiency.”

As it relates to the backlog of court cases, Mr Pinder highlighted the issue as a problematic one and urged the judiciary to address this.

He said there are too many “unnecessary delays” in the court because attorneys are simply not prepared.

“Too often it is taking more than a year, and in some instances, more than two years to receive a judgment,” Mr Pinder noted. “This not only leaves the parties in limbo for an unreasonable period of time, but also could have significant economic consequences to our people and our country as well as those who seek to invest in our country.

“There is a legal maxim that says, ‘Justice delayed is justice denied’. This means that cases should be heard without unnecessary delay, as to do otherwise leads to great injustice. I encourage the judiciary to work with all of us to address this.

“It is necessary to point out the delays in court are a collective responsibility. We, as attorneys, must be more focused and committed to presenting a thorough and well-prepared case at the outset. There are too many unnecessary delays because attorneys are not ready or are ill prepared. We, as a body, must re-commit ourselves to advancing the administration of justice in a complete and prepared manner.”

For his part, Chief Justice Sir Brian Moree stressed that the court can no longer continue in this manner, especially when it comes to setting trial dates.

He described the issue as a challenging one and insisted the court will no longer “surrender its calendar” solely to accommodate lawyers, adding it was “unsustainable”.

He said: “In the Supreme Court criminal division, we continue to have difficulties with fixing trial dates within reasonable time dates. Lawyers who practise in this area are accustomed to obtaining trial dates which are far into the future based on their calendar. Every case must be considered on its own facts and circumstances, but as a general point, the court will not surrender its calendar to the commitments of counsel.

“It is time that we address the problem of scheduling conflicts and adjournments. Lawyers who are booked for 18 to 24 months into the future should not assume that this will dictate the pace of the case or the fixing of the trial date.

“I am aware that constitutional issues are engaged in this discussion, but the court is not impotent in the face of counsel who claim to have no availability for two or three years.”

The Chief Justice also said he planned to discuss the issue with relevant stakeholders.

“We have a duty to the public to address the backlog and to get criminal cases to trial within a reasonable period of time,” he said.

Despite this, Sir Brian said the court had a productive year in 2021, but noted there is still much more work to be done.

Speaking about the Court Services Bill, he said he was disappointed the bill had not been passed in Parliament and urged the Davis administration to make the legislation a priority.

He said: “(The bill) was tabled in the House of Assembly last year, but it was not advanced prior to the dissolution of Parliament. I am in communication with the Attorney General with this subject and I am encouraged by his assurance that this matter will receive the urgent attention of the new administration.

“I strongly urge the government to reintroduce the Court Services Bill in the House of Assembly and expedite its passage and enactment into law. The bill, if passed, would be a transformative legislative intervention which would fundamentally change the operations of the courts.”

This year’s ceremony was the last one Sir Brian will participate in as Chief Justice, as he is set to retire this year.

“I remain grateful and humbled by the ​opportunity to serve my country and the Bahamian people as the Chief Justice and I continue to thank God for his many blessings in my life,” he said.

Moree took the job in exchange for the "Sir" title and no doubt will have stayed just long enough to collect a government funded pension. And to think he will be leaving the judiciary much less well-off than when he became CJ.

Now we get to wait and see who Davis will promise the "Sir" title to in exchange for them becoming the next CJ. lol