More Than 100 Nominees For Local Government In Gb 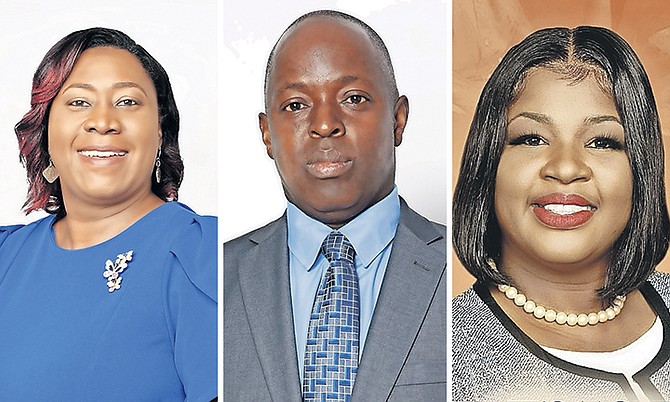 OVER 100 candidates have nominated for local government positions in the four districts on Grand Bahama.

The local government election is January 27.

Denise Pinder, of the Parliamentary Registration Department, reported that a total of 102 candidates were nominated on January 6. Of the four districts, West Grand Bahama recorded the highest number of candidates with 54 people vying for posts.

The City of Freeport District has 24 hopefuls; East Grand Bahama has 16, and Sweeting’s Cay has eight candidates.

She said there were insufficient people nominated in some areas where there will be uncontested elections.

Candidates have their campaigns underway, erecting billboards along highways, and some are canvassing neighbourhoods, talking to constituents and giving out flyers and holding meet-and-greet events.

In the Sweeting’s Cay District, she said eight candidates were nominated.

In East Grand Bahama, there are five polls, but an election will be held in only two. In EGB polling division six, there will be elections held for residents in McLeans Town, Pelican Point, and Rocky Creek. Six candidates were nominated there.

And in polling division 9B, there will be elections for residents in Smith’s Point, Mather Town, and Laing Town. Three candidates were nominated for that polling division.

Ms Pinder said in East Grand Bahama polling division 2A, there will be no elections for residents of High Rock. The four persons nominated filled the four vacancies.

In East Grand Bahama polling division 2B, there also will be no contested election for residents of Freetown, Bevans Town, Gambier Point, and Gold Rock Creek. Two persons were nominated for the two positions on the town committee.

Ms Pinder said in polling division five, which is Water Cay, one person had nominated to fill the one vacancy for a town committee member.

Mr Culmer said he is looking forward to the election. He said he has been working since day one, through Hurricane Dorian, and the pandemic to assist constituents of Marco City.

He is optimistic based on the work he has done in the area.

“I have made myself available to constituents of Marco City,” he said. “I provided $20,000 worth of building materials after the hurricane, and during the pandemic provided 200 masks and breakfast in the park, and back to school and grocery package distribution, and Christmas parties.”

If re-elected, he plans to partner with Marco City MP Michael Pintard in developing a tech hub on Gambier Drive for children in the area for computer access and after school classes. He also plans to develop a youth mentorship programme for high school boys seeking to acquire community hours for graduation.

Frazette Gibson, a former chief councillor, is also seeking re-election in the Central Grand Bahama area. She said she was able to achieve all her initiatives over the past four years.

She was able to partner with persons to develop a community park in the Sunrise Subdivision and Wellington Pinder Heights Subdivision; speed bumps and street signs erected in the area, and getting beach access in Bahama Terrace area for residents.

Ms Gibson said if re-elected, she will seek to enhance the community park by developing a community centre there, and seek to have CCTV installed in areas of South Bahamia where theft has been an issue.

“There have been some car break-ins in the area and so I would like to partner with the police to have CCTV put up in that area to deter break-ins and stealing,” she said.

One of her goals is also to partner with an organisation to develop temporary shelter for battered women and children.

Chervita Campbell is also a candidate. She is a former chief councillor who has been employed at the Sister Mary Patricia Russell Junior High School as a school guidance counsellor for 18 years.