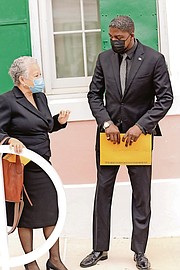 MINISTER of Education Glenys Hanna Martin and Minister of State in the department Zane Lightbourne outside the House of Assembly yesterday. Photo: Donavan McIntosh/Tribune Staff

THERE are new complaints about the Ministry of Education’s learning management system, with issues causing some delays in teaching and reports of users being unable to log on to the system.

Bahamas Union of Teachers president Belinda Wilson released a voice note about the problems she said were experienced with the LMS on Tuesday, calling it “a new term with the same old issues”.

Tuesday marked the opening of the new school term for the public school system.

“The same challenges that the union raised,” she said. “The same challenges that teachers and students faced for over 20 months still have not been corrected. This morning (Tuesday), because of the LMS, teaching never started until 11.30am in some schools or classrooms. Others missed the first lesson. Others never got on to the LMS so they resorted to Zoom and other personal platforms.”

She added: “As we focus on the thousands of students who (have) never logged on to the virtual (system) since March of 2020, we also have major concerns about the number of hours lost because of system errors, blank screens, incorrect passwords, system shutdowns, and users being dropped off of the platform very frequently.

“Teachers, assignments, lesson plans, and work being deleted and much much more. It is paramount that the Ministry of Education ensures that the myriad of technological issues that have frustrated teachers, students, and parents be fixed forthwith. Why are we wasting the taxpayers’ money on an inadequate, inoperable, inefficient virtual platform to the detriment of our nation’s children?”

For her part, Education Minister Glenys Hanna Martin expressed disappointment with the system having issues, but said she was assured they would be ironed out.

“(We are) very disappointed that on the first day of school the system had issues. Now in speaking to the operators of the system, the producers of it, they have advised that you know it was a blip, etc, but I’m told today again there are problems and we’ve spoken directly to them,” Ms Hanna Martin said.

“We don’t find it acceptable that on the first day of school that they are having these sort of issues. Of course with technology, things get hampered and so we’re watching it with a view to ascertaining exactly how this will play out.

“I have been assured that the issues will be ironed out, but certainly we will not be looking forward to a situation where we have recurring and sustained problems with this system. So we’re currently monitoring it. We’re in dialogue with the producers or originators of this programme and we are trusting and hoping that this will work itself out quickly and that we will not see continued disruptions in virtual education in this country.”

How in the world are these concerns new !!??

They have no idea of the limitation of these LMS.

And they gave the contract to jamaica. I tried to attend a seminar from a school in Jamaica once. They never logged on.

So, to run online classes properly is very expensive. The best one I attended was not one fella in the basement with a white board.

There were 3 hosts in different locations. Two were instructors , one on stand by in case the other was disconnected. The third one was a producer who managed the objects on the screen, collected questions and presented the quizzes.

The MOE does not have sufficient staff for all that.

I'm beginning to think that Belinda is the issue. She's been president of the BTU for a long time and nothing has gotten better.

She finds every reason to give pain to children in the name of everything.

Well , no one talks about the elephant in the room. The inadequate level of technology literacy among teachers.

That is not different than what you see in other workplaces.

Did you ever have a fella call you to adjust the margin or enter page numbers in a document when you were walking by? You help, except you have to keep doing it over and over again. I avoid those people.

And sometimes there is embarassement of people who save or delete documents wrongy and have to redo work, and the embarassment of hitting reply to all.

And the tribe who cannot print pdf. So they keep barking at you not to email pdf because they cannot print it.

Yep that is real, because it does not only affect the older people. And teachers can work till age 72.

"it does not only affect the older people.

Correct. Each person should be assessed on their own merit. age has nothing to do with it. Their are some professions for which age is an amplification of skill. Who wants to fly with a young pilot just out of training school? Or go to war led by a West Point newbie?