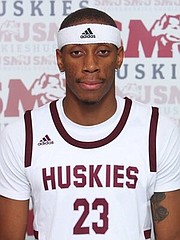 QYEMAH Gibson will take his talents to professional basketball and will begin his career in Spain’s LEB Gold League.

Gibson has signed with Palmer Almer Mediterranea Palma for the upcoming 2022-23 season.

Palma head coach Pau Tomas said he expects Gibson to have an immediate impact on the programme once he joins the club.

“Qyemah is here to be one of our offensive references, a player with a lot of points in his hands, capable of scoring from catch-and-shoots and from bounces.” he said. “He comes to add to the team and contribute his grain of sand both in attack and defence. I am convinced that he is going to be one of the players to follow in this LEB Plata.”

The LEB league was founded in 1996 and is played under FIBA rules.

The league is contested by 18 clubs. Each season, the top-finishing team in the LEB Oro are automatically promoted to the Liga ACB.

The teams that finish the season in 2nd to 9th place enter a playoff tournament, with the winner also gaining promotion to the Liga ACB. The three lowest-finishing teams in the LEB Oro are relegated to LEB Plata.

In his final season with the Huskies, Gibson won the Male Athlete of the Week award and was ranked top 10 in the AUS in points scored, points per game, field goals made, three-pointers made, total rebounds, rebounds per game, blocks, minutes and minutes per game.

In his final collegiate season, he averaged 19.2 points and grabbed 7.9 rebounds per game.

Gibson was a role player in his first year with the Huskies and averaged 5.9 points with 2.5 rebounds per game in 20 appearances off the bench.

The COVID-19 pandemic cancelled what would have been his third season with the Huskies but a strong finish for 2022 set him on the path for the professional ranks. Gibson was recruited to St Mary’s by former Huskies and current Niagara Prep coach Ollen Smith.

Smith’s Ontario, Canada-based Empower Sports Network hosted tryouts as a part of its exchange programme in 2018.