WORLD CHAMPIONSHIPS: Bahamian athletes in action on day one 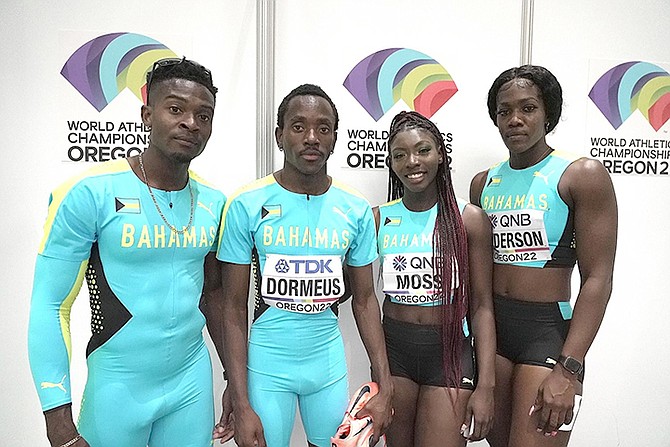 THE Bahamas, with a mixed relay team and three individual athletes, didn’t have a successful negotiation through the qualifying rounds of their respective events to advance on Friday as the World Athletics’ 2022 World Championships got underway in Eugene, Oregon.

The team finished in 15th place with the two heats combined.

Grand Bahamian Donald Thomas, the 38-year-old 2007 world champion, bowed out of the qualifying rounds of the men’s high jump with a leap of 7-feet, 3-inches or 2.21 metres for a tie in 12th place in Group B and 23rd overall.

In the evening session of day one, Samson Colebrooke was the only competitor to show up in the heats of the men’s 100m. He placed fifth in heat five in 10.23 for 39th place overall. American Fred Kerley had the leading performance with a stunning time of 9.97, followed by his compatriot Trayvon Bromell in 9.89.

On Saturday as day two unfolds, Anthonique Strachan, 28, will continue the Bahamas trek through the 10-day competition being held in the United States for the first time, when she contests the first heat of the women’s 100m.

The top three finishers in each of the seven heats and the next two fastest finishers will advance to the semi-final on Sunday. Both Strachan and Gaither will also contest the 200m starting on Monday with the heats.

Also on Sunday, repeat Olympic champion Shaunae Miller-Uibo, 28, will open her campaign in the women’s 400m as she goes after the gold that slipped away from her in 2019 in Doha, Qatar when she was beaten by Bahrain’s Salwa Eid Naser.

The Bahamas, however, will not have 26-year-old Steven Gardiner in Eugene to defend his world title in the men’s 400m. Gardiner announced just before the start of the championships that he had to withdraw from the competition with a UTE tendon inflammation to his right foot.

The Bahamas also has the women’s 4 x 400m relay; Devynne Charlton in the women’s 100m hurdles and Ken Mullings in the men’s decathlon to compete later in the week in the bid to continue a string of winning at least one medal at the championships since 2013.