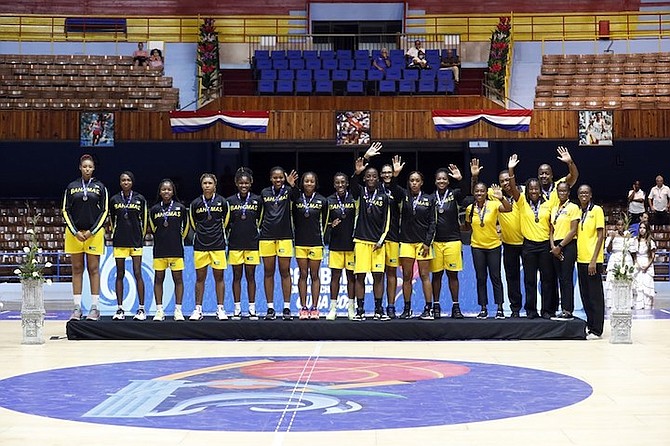 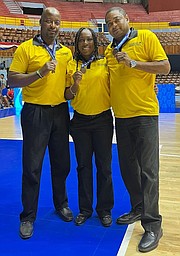 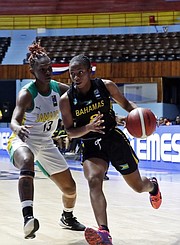 DENIKA Lightbourne drives to the basket.

VALERIE Nesbitt drives through the defence of the Jamaican players.

AFTER falling short of getting into the gold medal round, head coach Donillo ‘Donnie’ Culmer said the women’s national basketball team wanted to make sure Team Bahamas returns home with the bronze medal from the FIBA Caribbean Women’s Basketball Championships.

Culmer, assisted by Diasti Delancy and Deven Johnson, held off Jamaica for a 68-57 victory in the third place at the end of the five-day tournament yesterday in Havana, Cuba. It was the Bahamas’ second victory over Jamaica after they won their first game in their only game in the round robin. “The team’s performance was great. We had some ups and downs, but this was a very young team and so some of the girls had some jitters,” said Culmer, who had at least two high school students who will be going into grade 12 in September.

“We wanted to finish with the gold or at least play in the gold-medal game, but the Dominican Republic and Cuba were a little bit better than us on the days we played them and we felt a bit short.”

The Bahamas, coming off an 81-56 loss to the Dominican Republic in the playoffs on Saturday, got a game high 14 points with 12 rebounds, two steals and a block from starting centre Britinique Harrison.

Jamaica was led by Faatimah A with 12 points, eight assists, three rebounds, two steals and a block.

The Bahamas held a slim 18-14 lead at the end of the first quarter and posted a 32-29 advantage at the half.

The Bahamas came out of the locker room and went on a 18-9 spurt in the third to extend their margin to 50-38 at the end of the third quarter.

Jamaica outscored the Bahamas in the fourth, but it wasn’t enough to stage the massive comeback for the upset.

“Jamaica came out and gave us a run for our money in the first half,” Culmer said. “So I told the girls, we have to dig down deep because we have the whole Bahamas watching us. Today is Sunday and everyone was watching us. So if everyone does their job, we will be successful in taking home the bronze.”

The other members of Team Bahamas were Karolyn Baptiste, Lorraine Oliver, Roberta Quant and Tiffany Wildgoose.

The trainer was Sasha Johnson.

Looking at the team they had to work with, Culmer said if the Bahamas Basketball Federation could keep the core players together, the future looks bright for the women’s national programme. “We need to find some bigs who are willing to play for their hometown and I think we should be good for a good eight years because these girls are very, very young,” Culmer reflected. “We have some girls who are going into their final year in high school in the United States and the Bahamas, so the future is bright for us.”

Team manager Anastacia Moultrie said the Bahamian team made the tournament a tough one, but they are delighted to come back with the bronze.

“We fell short shooting and not hitting the open shots and a lack of big women to help rebound,” Moultrie said.

“But thank God we pulled off the bronze. So for November, hopefully we will have some bigs to go and by then, we will be working on our shooting.”

The Bahamas will be back in November to participate in the CentroBasket Tournament.

In the four-team field in the Caribbean Championships, the Bahamas was blown out 76-44 by Cuba on Wednesday and 73-50 by the Dominican Republic on Thursday before they won 74-53 over Jamaica on Friday for a 1-2 win-loss record and third place in the round robin standings.

In their rematch against the second place Dominican Republic in the playoff on Friday, the Bahamas lost 81-56 to set up the showdown against Jamaica, who was winless in their three games in the round robin and lost to Cuba in the playoffs.

Cuba stayed undefeated as they won the gold 79-60 over the Dominican Republic.

The Bahamas will be back in Mexico November 22-27 to participate in the CentroBasket Tournament.