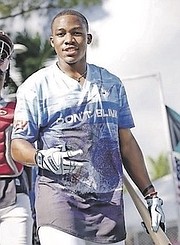 TEXAS Rangers prospect Zion Bannister continues to progress within the organisation and received a new assignment at the Single-A level.

Bannister was assigned to the Down East Wood Ducks, the Rangers’ Single-A affiliate, based in Kinston, Carolina and competes in the Carolina League.

He made his debut with the club on July 15 and finished 1-2 with a run scored in the Ducks’ 6-3 series opening win over the Columbia Fireflies on July 13. He spent 10 games earlier this season with the ACL Rangers in the Arizona Complex League.

In the ACL, Bannister played alongside fellow Bahamian Keithron Moss for the second time in their pro careers.

In one of his top performances of the season thus far, he went 3-4 with a double in the Rangers’ 4-2 win over the ACL Dodgers in the season opener.

The highly touted 6’3” 190-pound outfield prospect was called up to the club’s Spring Training roster for Cactus League play in Surprise, Arizona.

Bannister was originally signed by the Rangers in July 2019 and has made his debut on the Dominican Summer League roster the following month.

He progressed to the AZL Rangers of the Arizona Rookie League on August 15 as a late season call up and appeared in 37 games where he hit .227 with six doubles, two home runs and 15 RBI.

With the AZL Rangers, he teamed with Moss to help lead their team to the league title.