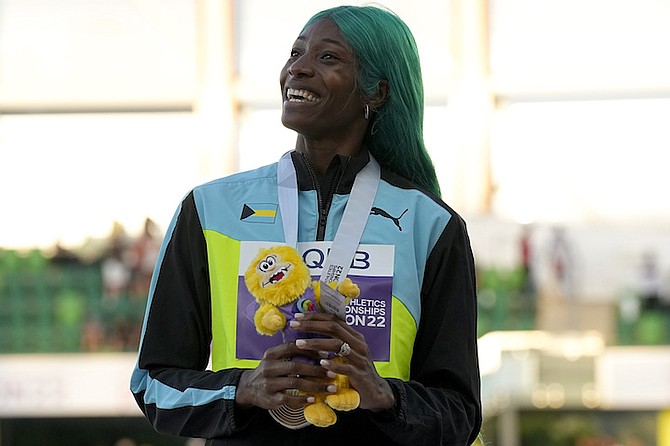 Scenes from Shaunae Miller-Uibo's gold medal-winning race in the women's 400m at the World Championships in Eugene, Oregon. (AP photos)

Shaunae Miller-Uibo wins the final of the women's 400 metres at the World Athletics Championships on Friday, in Eugene, Ore. (AP Photo/Ashley Landis)

Gold medalist Shaunae Miller-Uibo after her win in the final of the women's 400 meters at the World Athletics Championships on Friday in Eugene, Ore. (AP Photo/Gregory Bull)

As she tacked on the final piece missing from her glaring crown, Shaunae Miller-Uibo completed what she called her final global 400 metres by finally adding the World Championships title to her illustrious career that now has her pegged as one of the greatest ever.

On Friday in Eugene, Oregon, the 28-year-old Miller-Uibo used her imposing 6-foot, one-inch frame to circle around the Hayward Field in a blaze of glory for the gold medal in a world-leading time of 49.11 seconds.

She led a Caribbean sweep, with Marileidy Paulino of the Dominican Republic taking the silver in 49.60 and Sada Williams of Barbados snatching the bronze with a national record of 49.75.

“It has been a long time coming and the main thing for us this season was the world championships and a gold medal,” said Miller- Uibo, who began the trek this year by earning her first world indoor title in Belgrade, Serbia.

“That’s one thing we were missing, so I ran a very tactical race. To go out with the gold, I am very proud.”

The historic journey for Miller-Uibo began in 2010 when she crossed the finish line as the world under-18 champion, world under-20 champion, two-time world championship silver medallist and a fourth place as well as twice the Olympic champion.

But in saving her best for the last as she powered from lane three to take control of the race on the back stretch, Miller-Uibo was all business as she came off the curve with a substantial lead that she maintained down the home stretch.

It was poetry in motion and as the celebrations began, Miller-Uibo was greeted with a hug from her husband, Maicel Uibo of Estonia, who was competing in the decathlon and her mother, May Miller, who draped her with the Bahamian flag.

Don’t expect to see any further attempt to go after another title at the 2023 World Championships in Budapest, Hungary, August 19-27 or the Olympics in 2024 in Paris, France, July 21 to August 11.

Making it emphatically clear that she’s done with the one-lap race, Miller- Uibo said the focus will shift back to the 200m where she will attempt to put her stamp of approval on her quest to also establish herself as one of the greatest 200/400 champions on the planet. “That’s it for me running the 400m,” stressed Miller-Uibo, who got to avenge her only loss this season to Paulino and Jamaica’s Stephanie Ann McPherson on May 13 at the Ooredoo Doha Meeting.

“The plans for me are the 200m, which has always been my first love, and get back into that.”

It was the first medal for the Bahamas at this year’s championships - the island nation got to continue its streak of earning at least one in every championships since 2012.

Miller-Uibo was also listed to run if the women’s 4 x 400 relay team had advanced out of the heats on Saturday.

But according to assistant head coach Shaun Miller Jr, some members of the team got ill and while they wanted to gut it out, it was determined by the team doctor at the last minute that they were “too ill” to run, so the team was scratched. There was also unconfirmed reports that head coach Rupert Gardiner also took ill and had to be treated at a local hospital for an undisclosed condition.

This woman is phenomenal.

And Tribune is so clueless that her husband (Maicel Uibo) is called her wife in another article. An apology is required.