‘World wants us to absorb all who leave Haiti’ - PM 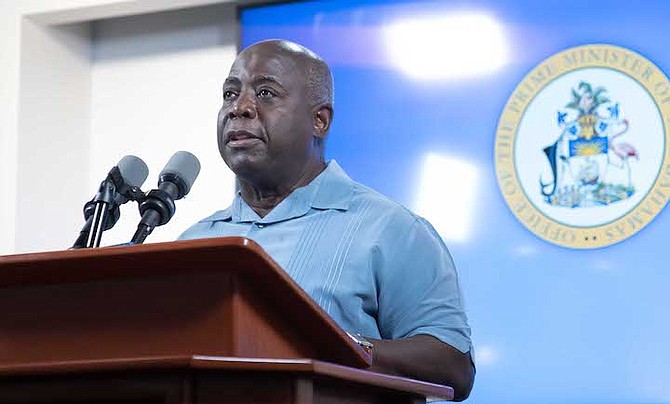 PRIME Minister Philip “Brave” Davis said despite the world suggesting that The Bahamas “should absorb all of those who leave Haiti”, the government will not open the country’s borders to irregular migration.

He said this is because we do not have the resources to do so.

Prime Minister Davis was asked about his government’s position on irregular migration and how they plan to tackle the issue after over a dozen Haitian migrants died after their boat capsized early Sunday.

Officials believe the group were en route to Florida from The Bahamas in a “suspected human smuggling operation.”

It is not clear how they arrived into the country or whether they were documented or not.

“The world is suggesting that we should absorb all of those who leave Haiti. That’s what they will say to me,” Mr Davis said during a press conference yesterday.

“When I was at the summit of Americas, they wanted me to sign onto an irregular migration declaration but we have our own peculiar circumstances which I keep reminding the world of. We’re unable to open our borders to irregular migration and our refugees either because of are own limited resources and because they ask us to do things, but at the end of the day, who foot’s the bill? You, the taxpayers so we have a delicate balance that we are going through so in so far as exiting, between the police force and the immigration department, they are collaborating to ensure that we assist in preventing the exiting of the irregular migrants here who loosely head to the north.”

Mr Davis also raised concern about the state of turmoil in Haiti and noted that regional leaders were looking at how best to resolve some of the issues in Haiti.

“We just had a resolution – part of that resolution was finally passed about two weeks or about a week and a half ago so that we continue the presence of the UN peacekeepers on the ground. The question is whether there will be any intervention.”

Mr Davis continued: “You know our mission of CARICOM has always been that the solution has to be a Haitian solution rather than an imposed suit. That continues to be our position and we are to engage very soon in attempting to bring the factions together.”

“At the moment, it’s just the gang wars and it’s a failed state as we speak and efforts to bring the warring parties, and when I say the gang leaders together, are in train as I speak.”

“And so we’re just going to keep our fingers crossed. The situation in Haiti is really serious and we don’t know what the answer will be. There are talks about imposing the will of other countries onto the people, but again, as I said, we want it to be a Haitian solution, but where that is possible.”

The Bahamas has many issues to solve the health care issue is serious crime and unemployment , we are a small nation we can not take on the problems of Haiti , the Bahamas has done a lot for the people off Haiti who will claim their bodies for burial will their families or the Haitian communities

I'm struggling what can logic choose how Columbus statue poses on steps Government House whilst occupied by black man's, minus an arm and a leg missing after being attacked by man's wielding with a sledgehammer ... But its okay for our own colony's insurance mans', act as Agents for English insurance underwriters of policies offering compensation in event human slaves were lost as a a seagoing ship's insured cargo. - Yes?

Even if you did, they are ungrateful. After 2010 Brazil gave them 10000 immigrant visas and land to setlle.

They walked to the US-Mexico border.

I just hope this is not a way to soften upcoming immigration policy just not to get blacklisted.

If the world is so concerned about the people of haiti then the world should take them. I swear i can't understand what this world is coming to. It's getting more and more populated with people who act so righteous and yet they want OTHERS do deal with problems. I feel for the people of haiti but taking them in will not solve anything and frankly, it would likely cause more problems. The bahamas already faces unemployment. yet others expect us to take them in and put even more strain on the country? America, the land of opportunity, the country that has all sorts of industries where they could find work halted them at their borders yet WE are expected to take them in? I understand they've had a great deal of misfortune on them over the years but how can a country like ours that's barely taking care of itself be expected to take them in?

How about we talk about how all the money that gets sent their way never getting to the people? . Let america and canada pick them up and take them in. It's high time "the world" start putting it's money where it's mouth is and DO something if they're so concerned.

Undocumented immigration (for say work and residence) and refugee immigration are indeed challenges for The Bahamas. Challenges that must be better addressed and with the help of countries such as the United States, often the preferred end-destination for many of our migrants despite the hostility so many experience there.

However, before we point fingers, we must consider the facts. According to 2019 UN statistics, we are not in the top fifty (50) countries by immigrants as a percentage of our population. (See https://www.un.org/en/development/des...">https://www.un.org/en/development/des...) Also, we are much wealthier than many countries that have have proportionately larger immigrant populations.

Further, many of the immigrants under discussion and often maligned, whether documented or undocumented, are readily hired by Bahamian individuals and businesses and by non-Bahamian residents.

UN definition of refugee: Refugees are persons who are outside their country of origin for reasons of feared persecution, conflict, generalized violence, or other circumstances that have seriously disturbed public order and, as a result, require international protection.

Keep them out or suffer the consequences.

We cannot take them on I am glad at least he stood up to them and did not just say yes master. They have problems just like us, we are fighting gangs to some are in political places and some on the streets. If we can help ours how in the world can we say we can help others. Lock da door. No entrada.

"There are talks about imposing the will of other countries onto the people, but again, as I said, we want it to be a Haitian solution, but where that is possible.”"

That's just so funny. Haitians will think of a solution? The only thing they can think of is having more babies so people feel sorry for them and give them food. With that food, they make even more babies and the cycle continues. Same as Sudan. In fact, Haiti should be referred to as Western Sudan to complement their current North and South.

The headline to this news story is laughable to say the least when you consider successive PLP and FNM governments alike have betrayed the Bahamian people over many decades by allowing our small nation to succumb to what has grown to be a very large and unsustainable invasionary force of illegal Haitian nationals.

And here we have Cruel Davis now effectively saying, with a straight face, that our political ruling class were simply doing as they were told to do by foreign interests with no regard whatsoever to the existential threat posed to our small nation's economy and national security by such an overwhelming invading force of illegal Haitian nationals.

It is generally well known that Cruel Davis, Fwreddy Boy Mitchell, and many others like them, are well-entrenched among the treacherous political ruling class who have steadfastly refused over many years to do anything meaningful to prevent the continued invasion of our small nation by overwhelming numbers of illegal Haitian nationals.

These corrupt and incompetent bone heads sold out our enviable Bahamian culture, higher standard of living and much better way that so many of us over the age of 55 fondly remember.

PRIME Minister Philip “Brave” Davis said despite the world suggesting that The Bahamas “should absorb all of those who leave Haiti”, the government will not open the country’s borders to irregular migration.

Just who does this roly-poly cruel Davis think he is fooling?!

Successive corrupt prime ministers since 1973, including the very chubby and cruel Davis, have kept our country's borders wide-open to the influx of overwhelming numbers of illegal Haitian invaders.