Bastian and Higgs to fly the flag for Bahamas 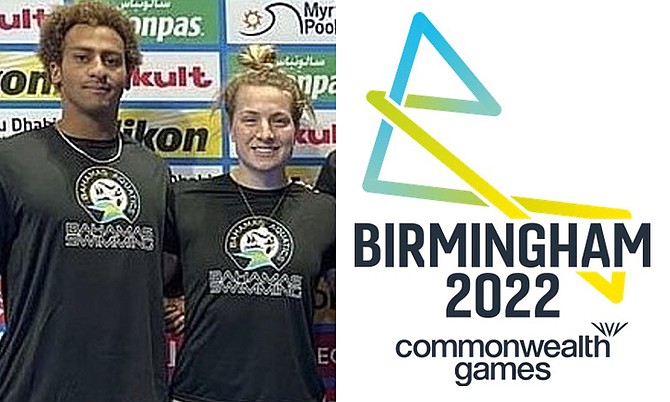 BIRMINGHAM, England: When the Commonwealth Games gets underway today, swimmers Izaak Bastian and Lilly Higgs will be the joint flag bearers for the Bahamas during the march past of athletes.

Bahamas team general manager Rudolph Ferguson confirmed that the decision was made during the senior management meeting by the officials for Team Bahamas before they announced it to the swimmers.

The ceremony will witness the participation of 72 countries and will feature more than 5,000 athletes when it gets underway at the Alexander Stadium at 7pm, which is five hours ahead EST – or 2pm in the Bahamas.

Prince Charles will read The Queen’s message for the Commonwealth Games as he represents Queen Elizabeth in a prelude to 11 days of exciting competition in 25 different disciplines.

Bastian and Higgs are here in Birmingham with the rest of the swim team that includes head coach Andy Loveitt out of Grand Bahama, and the team of Devante Carey, Lamar Taylor, Luke Kennedy Thompson, Katelyn Cabral, Zaylie-Elizabeth Thompson and Rhanishka Gibbs.

Travano McPhee is the assistant coach. They are staying at the University of Birmingham, one of the three designated games villages.

Also here in Birmingham, but staying at the Hilton Hotel at the NEC, are boxers Carl Hield and Rashield Williams, who will be coached by Vincent Strachan, the president of the Bahamas Amateur Boxing Federation. Triathlete Armando Moss and and his coach Cameron Roach are at the University of Warwick.

Ferguson said over the next few days they are expecting members of the other disciplines, including wrestling, consisting of Felix Neely and Abaco’s Lorin Sawyer, coached by Kenton Roker; wrestler Rashji Mackey and coach Clinton Burke and judokas Cynthia Rahming and Andrew Munnings, coached Willard McKenzie;

Ferguson, a track and field coach with the Star Trackers Track Club, could not confirm exactly who would be coming in from track and field. But said some of those restrictions may hamper their efforts to have athletes replaced who can no longer come because of one reason or the other.

It will be a wait and see process with exactly who will be here to compete in track and field when the athletes start arriving on July 30. Nonetheless, Ferguson said they are anxious to get the games started with swimming and triathlon on Friday.

“We have a very young team and, for a lot of them, this is their first time competing at the Commonwealth Games,” he said. “The expectations are extremely high, but we don’t want them to put any pressure on themselves.

“We want them to go out there and compete at their best and once they give us that, we can’t expect any more. We do expect to see a lot of PBs (personal best performances). Let’s get to the finals and anything could happen in the final. So we’re very optimistic about this team. I think they all have a sense of pride representing the 242. We will make them as comfortable as possible.”

Minister of Youth, Sports and Culture Mario Bowleg, along with BOC president Romell Knowles and Bahamas Aquatics president Algernon Cargill head the list of dignitaries here for the games, but are not directly involved with Team Bahamas.