STATESIDE: Who’d have thought, Cheney’s daughter is our champion 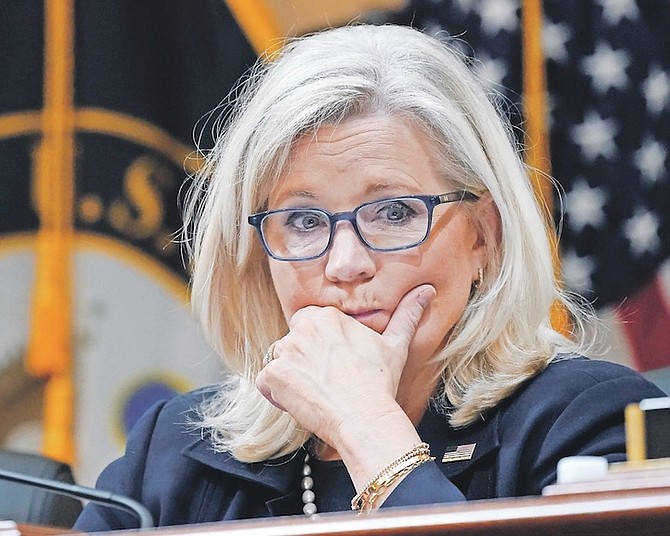 THE two friends were on a long walk by the riverbank. Both had just fought off what they thought were COVID-like symptoms: Sore throat, scratchy voice, occasional cough, a bit of sniffling and a general feeling of listlessness. No fever, though. Comparing notes on the day before, they confided to each other that they had been doing home self-tests for the past several days, and neither had tested positive even once.

“It was actually kind of disappointing,” Beth said to her pal Lauren as they began to loosen up and step into their early-morning pace. “I’ve been vaxxed and boosted, as I mentioned on the phone. I figured that I was feeling lousy because of COVID. Lots of my friends have experienced this, and it seems like as soon as they get their positive test, there’s an explanation for their sluggishness. It’s understandable. Most of them say that as soon as there’s a reason, they stop worrying and begin feeling better. Isn’t that wild?’

Lauren stopped and stared at her friend. “Not at all! That’s basically what happened to me. That’s why I called you to see if you wanted to do this walk.” They resumed their quickening pace.

“But I had another reason,” Lauren said. “You’re going to think I’m crazy. But over this summer, something really bizarre and totally unexpected has happened to me.” She paused.

“Hey, don’t leave me hanging here,” Beth snapped. “What happened? Have you fallen in love again?”

“Not a chance,” Lauren replied. “It’s much weirder than that.

“I find that I want to vote for Elizabeth Cheney.” Casting a furtive look over at her accelerating friend, Lauren was now in a hurry to explain herself. “I’ve gotten completely hooked on these hearings on TV about the January 6 riots 18 months ago. I tuned into the first one just out of a kind of morbid curiosity, but the committee behaved so calmly, rationally and professionally that I couldn’t believe I was watching Congress.

“The chair, that black congressman from Mississippi, what’s his name?”

“Oh yeah. Well, he was calm and reasonable. Not an exciting speaker, but it looked like he had worked hard on his presentation. Then, Liz Cheney started talking. She was just sensational. Very even delivery, not very emotional, but her words really packed a punch. She was presenting evidence, making sweeping statements that it sounded like she could support. I thought, wow, here is a woman who can hold her own on national TV, making a case much more persuasively than the two Trump impeachment trials ever did.

“That hearing was in the evening, and I missed a couple of my shows as I stuck with it for over three hours. I was mostly hooked already, but what clinched it for me after that hearing was the inept, limp, horrid response from these male politicians like Kevin McCarthy and his deputy, the guy from Louisiana who got shot at that baseball practice a couple of years ago.”

“Yeah. Thanks. What a moron. He gets shot by a lunatic with a gun, is really luck to survive, and then doubles down on how anti- American gun control is. I wonder if he would respond any differently if it had been his wife or kid who got shot.

“Anyhow, I started getting interested in Liz Cheney in a way that I have never experienced with top Democratic women like Kamala Harris or Elizabeth Warren. She is just so, I don’t know, strong. Calm and unflappable. But she is also really clearly patriotic. You can see in her face and hear in her voice that the events from that capitol riot that she just hates what happened, but that she recognizes that we’ve got to take the emotion and reflexive responses out of our political discussions and focus on the terrible things that occurred that day.

“And I agree with her that the perpetrators of that riot have to go to jail,” Lauren continued.

“I began TiVo-ing the hearings when they were on TV while I was at work. And I was actually excited to watch them when I got home that night. That committee has really done a good job, and the technical back-up is really impressive. The whole experience is kind of like watching these movies like “All the President’s Men” about Watergate or “Spotlight” about the Catholic Church’s scandals in Massachusetts. You know the outcome, but you’re drawn into the suspense of the moment, almost as if you didn’t know how things turned out.

“Am I crazy? Liz Cheney, our saviour? Daughter and political heir to her father, the one-time political prince of darkness?”

Beth didn’t reply for another hundred yards as the two moved away from the riverside and onto a tree-lined avenue, still maintaining a good steady pace. When she did speak, Beth surprised her friend.

“Actually, I don’t think you’re crazy at all. I can’t say that I’ve watched all the hearings like you have done, but it’s easy to relate to the indignation and outrage that Cheney is showing, and to share her belief that Trump and the other perpetrators should be punished.

Beth continued. “My feminist side says it’s way past time for a woman to be President. And look at what we have on our liberal side of the political divide. I’m not sure any of the Democratic women would do as good a job as Cheney has done on this committee. Check out her remarks in the paper this morning.”

Here are some of those remarks from Cheney: “Every American must consider this – can a President who is willing to make the choices Donald Trump made during the violence of January 6 ever be trusted with any position of authority in our great nation again?”

“I will do everything I can to ensure that the former President never again gets anywhere near the Oval Office. Ronald Reagan’s great ally, Margaret Thatcher, said this: ‘Let it never be said that the dedication of those who love freedom is less than the determination of those who would destroy it’.”

And summing up last Thursday’s prime-time committee session, Cheney said: “Let me assure every one of you this: our committee understands the gravity of this moment, the consequences for our nation. We have much work yet to do, and will see you all in September.” That’s when the January 6 committee hearings will resume.

While the January 6 committee continues to blend elements of an American grand jury and a Commission of Inquiry in its relentless investigation of Trump’s role in the capitol riot, the visible divide between Trump and his former Vice President continues to widen.

As speculation increases about when – not if – Trump will announce his third run for the White House, Mike Pence is following a traditional path in endorsing and supporting GOP candidates across the US. Often, Pence’s preference does not match Trump’s in the endorsement game, and observers are keeping score.

Pence, careful never to overtly criticise Trump for seemingly putting his Vice President’s life at risk on January 6, nevertheless pushes their party to “move on” from Trump’s loss in 2020 to Joe Biden. Trump still publicly believes Pence failed to take steps available to him under the constitution to assure Trump could remain in office after that defeat.

Pence notched a big win in Georgia’s Republican primary in May. He backed incumbent Governor Brian Kemp and Secretary of State Brad Raffensperger over Trump-supported Big Lie election denier challengers, and Kemp (with nearly 75 percent of the vote) and Raffensperger both rolled to victory.

The next clear confrontation between Trump and Pence comes in Arizona on Tuesday. Kari Lake, a long-time Phoenix television news reporter and anchor, faces establishment favorite Karrin Taylor Robson, who has the support of Pence and outgoing Republican Gov Doug Ducey.

Lake has campaigned with Trump, who has praised her as “the only candidate who is strong enough to protect the people of Arizona.” Robson, a former member of the state’s Board of Regents, is trailing Lake by about five points in the latest polls.

Georgia and Arizona were two of Trump’s most shocking losses in 2020. The Arizona contest will be closely watched all across the US next week.

What isn't being ignored are the ongoing failures of the Biden administration.

Hey Charlie, it's the economy stupid.

Yes, the economy is very important. However, with that said, what Trump did on Jan 6th was absolutely appalling and illegal. No one is above the US Constitution - not even a sitting President. As a registered Republican and a Christian, I can promise you I will NEVER vote for Trump and/or any of his "followers" again. There is nothing more sacred in our country (and maybe the entire world for that matter) than the US Constitution.

Most people in the US only become tangentially aware of politics during presidential elections in the US; off year and midterm turnout is much, much lower than presidential years. Nobody but the politically attuned really cares about this, and everyone had their mind made up a long time ago about Trump anyways. The honeypot from Jan 6th is not the big deal that US Pravdas are trying to spin it to be, especially considering the "summer of love" that happened beforehand. People are not stupid.

What people do care about is their wallet and with out of control inflation plus a recession (that quite frankly might go into full blown depression depending on how things play out in the coming months), nobody is on the Biden run right now. Those of us who were warning about all of this are being vindicated in real time, and no amount of "redefining" will improve the economic prospects in America. The Emperor has no clothes and everyone knows it.

I rarely respond to posts in this forum, this time I will.

When you decide to alienate yourself from a large voting block (Trump supporters),,, you are doing exactly what the Socialist Democrat's and Jan 6th show trial folks want. That's what it is all about.

I think Trump will become a "George Soros" if you will. His fund raising ability is undeniable.