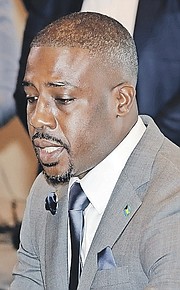 STAFF at Bahamas Public Parks and Public Beaches Authority were told to file a police report after files from a computer in the office were downloaded and removed “after hours” without approval.

McKell Bonaby, executive chairman of the authority, made the revelation during an at times heated argument with St Barnabas MP Shanendon Cartwright in the House of Assembly.

The row erupted after Mr Bonaby highlighted several concerns regarding how the authority was run under the previous administration.

He went on to tell the House of Assembly that shortly after assuming office, officials received reports there were “numerous alleged unpaid debts” and also discovered some of the agency’s equipment was either “inoperable” or “missing.”

“Some of the authority’s property was missing,” the Mount Moriah MP said during his budget contribution yesterday. “For instance, there was a dump truck that was unaccounted for by the purchase and fleet department…

“I report today that the dump truck that is government property has been returned to public parks and public beaches authority. Inspectors complain about their cars constantly breaking down and having to carpool.”

The remarks prompted a response from Mr Cartwright who insisted Mr Bonaby’s claims were misleading.

The FNM MP argued it was no secret the authority had been plagued with financial challenges over the years and maintained under-funding had been a problem under both the PLP and FNM administrations.

Notwithstanding this, Mr Cartwright said efforts were still made under his leadership to resolve some of the operational issues and chided Mr Bonaby for being one sided and not painting the entire picture.

He said: “Since 2019 to when we left office, I would have reached out to the Ministry of Finance about vehicles - much needed vehicles - constantly but we were told by the Ministry of Finance that there was no vehicles so again when the member says something, he needs to put it in context and not suggest that it was neglect. Put it in context. At least say the honourable member tried to make an endeavour to get the vehicles if it’s not about politics,” Mr Cartwright said.

The two MPs then went on to argue about the issuance of contracts after Mr Cartwright revealed members of the PLP benefited from the authority under his leadership.

However, Mr Bonaby questioned how he came to know “who’s FNM or PLP.”

Mr Cartwright responded: “Why do we insult the Bahamian people? Why do we do that? How do we know who is FNM and who is PLP. Listen, Madam Speaker, many times I stood on my feet and I’ll say it again. How do I know that there are members of the Progressive Liberal Party that got opportunity at beaches and parks is because when somebody sits before you and say that I’m a stalwart councillor and I say to them, it doesn’t matter if you’re a stalwart councillor, you’re a Bahamian and some of those stalwart councillors were constituents in Mount Moriah, some he knows very well.”

However, Mr Bonaby fired back: “This is shocking. This is shocking. See what I was trying to do Madam Speaker was get a better sense of where the former chairman and his board was taking the authority.

“I asked the staff of the former chairman’s correspondence file. They told me they could not find it. They told me they could not find it. Not one correspondence. But I’m only saying what I was told. The reason why I asked for the file, Madam Speaker, is to get a better understanding as to why certain things occurred. A few days later after inquiries, a computer that was attached to my office had all the files downloaded and removed after hours. I requested the financial officer and my temporary assistant at that time to file a police report, I was advised that they have.”

To this, Mr Cartwright rose on a point of order, claiming he did not know what Mr Bonaby was talking about.

“I didn’t come in here and say that out of the 1,200 contractors under the PLP, they had no contract. People were working with no contract. I’m not suggesting that the former chairman did anything, you know... so when we come in here, provide context, the truth is thousands of people were helped under our watch of people, so some can continue to politick, but I’m not gonna allow that politicking to happen.”

What do they mean "removed"? Get an IT investigator. Deleted doesnt necessarily mean deleted

The police should read the Tribune and the House records then interview Vaughn Miller, he practically said the same thing Cartwright said. Other MPs were able to give contracts to their people but they victimized him so he couldnt give contracts to his people.

Meaning, another MP declared on the house record that beaches and parks' money was being funneled to special interests

9 months in and still the blame game... wow!! the more things change the more they stay the same.

Time to get to work, not filibuster about what Shanandon did. Sounds just like what that other NEleuthera fool talking about WSC.

Why is Mr Cartwright so upset . He does not know what the member is talking about so why is he on his feet it shows He is not to bright who would

Go to him for help and