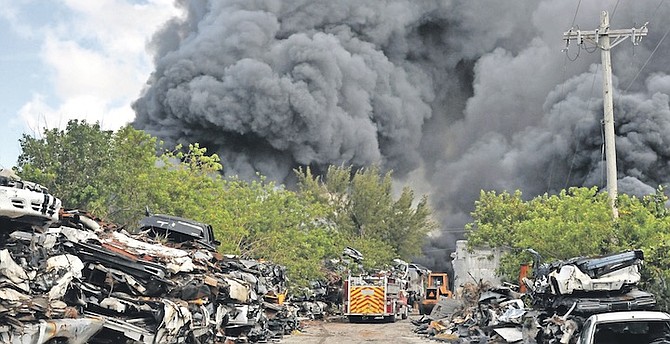 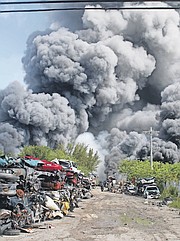 A massive blaze broke out at a car junkyard yesterday in the commercial industrial area of Queen’s Highway, Freeport.

Thick plumes of black smoke could be seen rising into the air just west of the Grand Bahama International Airport.

The fire is believed to have started around 5am, according to one business owner in the area.

The site was being used to store thousands of derelict vehicles which were destroyed during the Hurricane Dorian in 2019. The vehicles were awaiting export off the island. It is believed an estimated 5,000 to 7,000 vehicles were on the compound.

Assistant Superintendent of Police Stephen Rolle confirmed the fire did not affect any businesses or flight operations at GBIA. Even though airport employees reported smelling smoke, they said flights were not interrupted or cancelled.

The Royal Bahamas Police Force Fire Department responded to the scene and called in excavators and backhoes to assist with containing blaze. Heavy-duty equipment operators cut and clear a path to stop the flames from spreading to the other nearby businesses in the area.

While the cause of the fire is still under investigation, unconfirmed reports suggest that trespassers were onto the property cutting wires from the vehicles which may have ignited.

Aron Long, of Long’s Marine, said he received a call around 5am about a fire near his boat business, located next to the junkyard.

“I started getting calls around 5am from people who knew me about a fire nearby, he stated.

“I had heard that some guys were there cutting up car wires and may have ignited the flames,” he claimed.

Mr Long rushed out to his business and was able to secure his property as best he can.

“I cleared out the yard in case it (the fire) came, he said. We have lost a business day today and will end up losing tomorrow as well because we will have to put things back in place. We are watching and keeping our fingers crossed that the wind does not change,” said Mr Long.

He said that firefighters had to call in heavy-duty equipment operators to assist them in containing the fire at the junkyard. “The excavators and backhoes cut a clear path and stopped the fire from jumping to my property,” he said.

Mr Long is not happy that derelict vehicles being stored so near his business. “It is getting worse, he said. I’ve been complaining about it for years because I run a nice well-established business here and we are surrounded by junk.”

On June 1, a Grand Bahama Port Authority official had addressed the issue of derelict vehicle removal.

In a recent update, Troy McIntosh, City Manager and Deputy Director of the Building Development Services Department at GBPA, had last reported that around 5,000 to 7,000 vehicles were at the site on Queens Highway. He also said that they are working with the local vendor there to ensure they clean up and move those derelict vehicles at their premises. Mr McIntosh stated that the vehicles were not only an eyesore, but an environmental hazard.