I wasn’t around and probably you weren’t either, but after the upheaval of WWII, history seems to show us the relieved and exhausted world settled down to a new predictability. Germany, shamed by its past, turned to its future, ramped up engineering, revved up its factories and gave us the finest automobiles. Italy gave us leather and fashion, France served up wine, aromatic cheeses and fragrances, Columbia gave us coffee, Canada dished out everything maple, the UK treated us to friendship we sorely needed and America gave us hope.

Three quarters of a century later, ask anyone what they stand for and they will look as bewildered as a contestant who just bet too much on the final Jeopardy question and hasn’t a clue of the answer. We wonder what do we do next, where are we headed or more importantly, what is ahead for us? And most importantly, what do we stand for?

Welcome to the age of confusion

We search for definition but we are lost in a world where the internet blurs boundaries. We look for information and don’t know if we are being fed disinformation. Or to put it another way, we have never had so much information at our fingertips and been so unsure of what to do with it – or with ourselves. We are constantly questioning. The more saturated we are with facts and figures, opinions and ideas, the fewer ideas we have of our own and the more frustrated we become in trying to draw a straight line from Point A to Point B, as if the routes in our lives got mixed up on the map of our existence.

Why does any of this matter, you ask? Why even bother writing about it? Because a dear friend of mine is in the hospital fighting for his life. If that life is threatened, it is not solely because of the illness or condition he is suffering. It is because he was so busy – and so distracted trying to help others, trying to help save The Bahamas – that he neglected what he had to do for himself, though he knew for months he should have done it - stop by a lab and take blood tests so he could get health insurance with his new executive position.

That’s why our distraction and our confusion matters. It steals our time, messes with our ability to focus. That’s what oversaturation does to us. We get sucked into its whirlwind and veer off our path. The important task we were going to do today got lost or forgotten in the scramble of everything else we did do. The task we were supposed to do will wait until tomorrow, we tell ourselves. But the next day dawns and confusion and the distraction do not disappear and tomorrow is another day like today when we promise ourselves we will sit down and figure out such-and-such or call so-and-so, that relative or old friend we should have called last year. Then another day goes by and we spent too much time on emails or social media or googling, looking for an answer to a question that was not even on our minds when we woke up in the morning.

The problem with living in an age of confusion is setting priorities. We have Outlook calendars to keep our hours straight but no internal blinders to keep our lives straight.

Excuse me, I just thought of something I need to find an answer to... 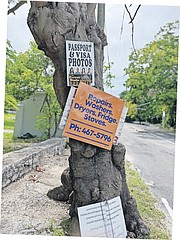 Hey Tree Huggers, Your Time Has Come – Up to $10,000 Fine for Messing with Mother Nature

When the compendium of environmental legislation introduced by the former government was announced in 2019, all eyes and ears were on a few highlights – the $30m fine errant developers could face if really naughty and the ban on single use plastics. But in that package, in addition to setting up two new funds, there was a lesser known piece of legislation that, when passed, became the Forestry (Declaration of Protected Trees) Act 2020.

While it amended previous legislation, for the first time it made messing with the trees that Mother Nature gave us a serious offence with convictions resulting in fines of up to $10,000 and/or three months’ imprisonment.

The Act names 137 species of trees, just about every tree you can think of. Trees are protected under the Act in various categories depending on their primary use - historical, aesthetic, endangered or threatened. You can’t harvest or eradicate them. If you are doing a serious trim that could impact their health, you need a permit. And you certainly can’t use them like a sign post.

“Trees bleed,” says Chris Russell, who helped write the legislation when he was the chief forestry officer with the Ministry of Environment and Housing.

“When you scar them, they have to find a way to heal,” says Russell who is now on his own in the private sector as Russell Craig Associates, trying to show developers the right way to protect what drew them to The Bahamas to begin with.

Russell is horrified by the rampant sticking of tress with staples and nails and his heart bleeds for them. It’s a battle I’ve been waging for so long I can only say thank you, Mr. Russell, for the tough punitive piece of the puzzle. He also says in the UK it is absolutely illegal to put a sign on a tree. Maybe there is something still to be gained from the British heritage that we did not fully understand or appreciate before when all eyes were on the monarchy.