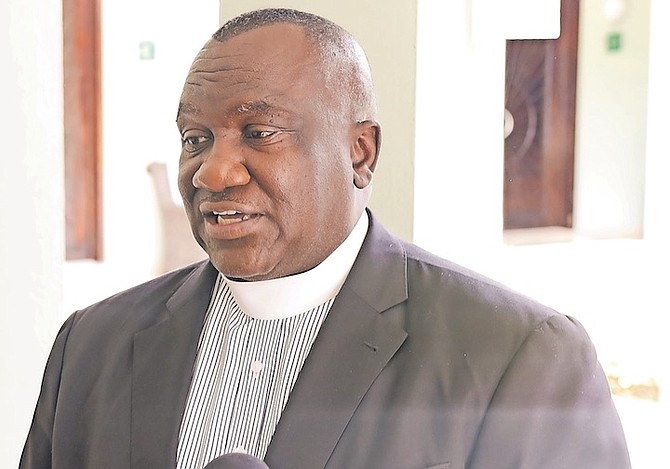 BAHAMAS Christian Council president Bishop Delton Fernander says the church will support efforts by government to tighten the law to provide protection against rape for spouses in the period between legal separation and divorce.

Mr Fernander said it was the clergy’s understanding that martial rape frequently occurs during that time and the church would stand behind tightening the law to ensure there are penalties for this kind of abuse.

He was asked what his personal views on the matter were as the council waits for a meeting with the government on how to tackle the issue. The discussions were recently foreshadowed by Social Services and Urban Development Minister Obie Wilchcombe in the House of Assembly.

However, he admitted yesterday that the church remains generally divided when it comes to marital rape.

“This is why our lawyers will be there,” Mr Fernander said of the impending meeting. “We have listened even to your Minister of National Security who would have put a legal position down (as to) how this can be addressed and we want to know why it’s not being considered.

“Like we say, it should not happen,” he said further when asked by The Tribune to state what his personal view was.

“If you are married, under the Christian principles of marriage, you have been given one to another and we see our mates, our spouses as a part of an extension of ourselves. So, there never should be a time when you want to harm yourself much less raping your loved one.

“We have been understanding that statistics show that most of this is happening in the gap between legal separation and heading towards divorce. If that is the case, let’s make stronger laws. During that period we can tighten that up and the church will stand with it.”

As for what his expectations were of the meeting, Mr Fernander said: “A clarity of why and we’ve been understanding that some of the legal minds are saying this can be attacked in a different clause. Why are we going to specifically deal with the clause that deals with marriage when we could deal with this in a different clause, if that is the case.

“We want to wrestle with that. We want to make it plain, have an understanding when we walk away. Is this the only way this can be dealt with?”

Asked what the church’s position was, he said: “Our position is divided as I’ve been saying. The sanctity of marriage is most important to the church. However, they do not stand for abuse, rape any kind of harm that is happening.

“We want to solve the problem, but we don’t want to touch the sanctity of marriage. That is fair.”

Regarding the meeting with Mr Wilchcombe, he said the BCC will have its own technical team present to adequately present its views.

“He said he will send us a few dates and see if it fits in the calendar. He said in his visitation to our conventions, which took place for all denominations, he heard the same message coming from the leaders that consultation needed to take place,” Mr Fernander said.

“It was sad that it wasn’t happening, but we’re glad that the minister is listening and it’s going to happen, but we look forward to a robust conversation. We’re not going to send just pastors. We’re going to send some of the legal minds to help in the discourse because we find in these meetings they bring their technical team and we do not. So, we hope to bring our technical team so that we can go through the recommendations that have been made.

Mr Wilchcombe had said earlier that he called church leaders and suggested dates as to when to discuss the issue of marital rape.

“We have to get to the bottom of this, to end this dialogue and to ensure that when we represent the country at CEDAW and other international bodies, that we are able to speak authoritatively on where we are going and how we are moving forward because it has been a vexing issue for far too long.”

What a colossal embarrassment for our country this guy is

RAPE BEFORE MARRIAGE, DURING COURTSHIP, HONEYMOON, MARRIAGE, SEPARATION AND DIVORCE IS ALL THE SAME. RAPE IS RAPE. WHAT'S THE DELAY AND WRESTLING ALL ABOUT? WHAT ARE WE TEACHING THE FEMALES WITHIN OUR HOMES, FAMILIES, SCHOOLS, CHURCH, WORK AND COMMUNITIES. WE ARE NOT IN SOME BARBARIC OR BUSHWACKER ERA LAST I CHECKED. IF A MATE LIMITATIONS DOES NOT MEET OUR EXPECTATIONS, SEEK PROFESSIONAL INTERVENTION FOR A CHANCE TO TURN THINGS AROUND, BUT DO NOT VOILATE WOMEN, FROM YOUNG TO SENIOR. IF THAT DOESN'T WORK OUT EITHER, THEN SEEK RESPECTFUL ALTERNATIVES, ESPECIALLY IF CHILDREN ARE PART OF THE FAMILY UNIT (WHO BY THE WAY ARE NOT PONS OR FOR TRADE) AMEN. STOP DRAGGING LEGISLATION AND PUT AND END TO THIS. WE GONNA WAIT UNTIL CHRIST RETURNS AND SEE WHAT'S IN THE OBSTRUCTIONIST HEARTS?

Every successive Government brings this up and the pressure to pass the law always shows up the minute the Government changes. You can small an agenda even though you can tell most if not all of the Government leaders do not support it.

Kinda reminds me of the plastic bag ban. Here we are banning plastic this and that and Florida which literally has its neck in our waters and the same coastline and beaches still uses plastic. You can go into an Walmart and tote them back home. It's like there is one law for the smaller countries and another for the big ones. The Bahamas continues to allow itself to be forced into passing laws that noone else follows. Marital rape like the plastic bag ban is just another one.

NO - rape is rape in most modern/western countries!

Comparing rape to plastic bags is like comparing the Holocaust to covid restrictions - severely offensive and highly ignorant. I twofer of tardness...congrats!!!

If you believe you have the right to rape a woman... YOU are not a man!!!

Marriage is not the issue ..it is men with issues.