FACE TO FACE: A coronation in the homeland of Junkanoo 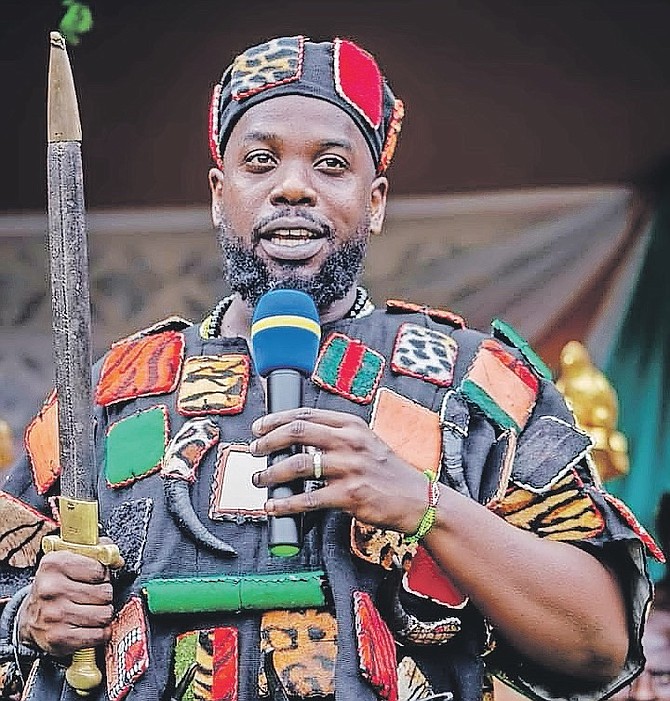 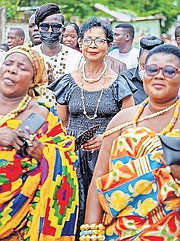 ANN MARIE DAVIS, of the Office of the Spouse, receives a royal greeting as she visits Ghana for the coronation of her son, Christopher.

THE heart of a man who went on a quest to learn the origins of Junkanoo only to be crowned in the name of the king responsible for its origins, must be filled with unspeakable joy. On Saturday, June 18, 2022, a coronation ceremony was held at the Palace in Busua in the Ahanta region, Ghana for Christopher Davis, who received the title Nana Asafohene Jan Kwa II. On hand for the special occasion was his mother, Ann Marie Davis, of the Office of the Spouse, who also represented on behalf of his father, Prime Minister Philip “Brave” Davis.

“In the past year, I have climbed up the traditional African political ladder, if you will. I don’t even have words to describe the level of prestige and honour I feel from it. It’s even difficult for me to talk about it because it’s still quite unbelievable for me… It’s like hitting the lotto!”

Nana means “King” and Asafohene means “General”, and it is the same title King Jan Kwa I held during his reign. This prestigious title comes with a lot of responsibilities. Christopher is charged with developing specific initiatives for Bahamian and Ahanta culture, especially as it relates to Junkanoo. He is spearheading the creation of a profound heritage tourism product. He will spearhead the first official pilgrimage for the public to visit the Ahanta Region beginning October 13, 2022. He will also help to create other business and cultural initiatives, with the blessing of the elders. The Federal Ahanta Capital has a population of over 2 million people.

Nana Asafohe King Jan Kwa I (known by the western world as John Canoe) was a mighty ruler in the area now known as Princess Town in Ahanta, a western province of Ghana. He became very popular throughout west and central Africa. People flocked to his kingdom in droves for safety during the time of colonial invasion and the Trans-Atlantic Slave Trade. According to Christopher, King Jan Kwa I and the Ahanta people are heroes for the entire African Diaspora, as they offered a safe haven and a place of peace.

Christopher and the Sankofa Flamingo group have been uncovering the origins of Junkanoo by traveling back and forth between the Bahamas and Ghana, collecting information and making records. They visited King Jan Kwa’s fort and ruins of his palace, mansion and wall. It was there he boldly fought the Dutch, Danish, British and Portuguese slave traders for many years, even when other forts were falling, until he was finally removed in 1725. He took exile at Kwadaso in Kumasi.

ANN MARIE DAVIS, centre, accompanied by businessman Andrew Wilson on her right, and in the back row, Angelique McKay on the left and Christopher Davis, right. They are greeted by a Ghanian entourage including: the Queen Mother of Akentenchie, the Divisional Chief of Agona, Ahanta Apemenyimheneba, and Nana Bozza IX.

Christopher will soon release a book entitled Black Rinse that delves into the origins of Junkanoo - a festival more profound in The Bahamas than anywhere else in the world - but is still practised in Ghana and other countries where Africans in the Diaspora live today.

“The spiritual significance is quite profound,” Christopher shared.

“We see many of our Bahamian traditional practices that may have been lost in translation being practised among the Ahanta people. For example, our use of cerasee. We use it for its medicinal value, but the Ahanta people take it to a whole other level.”

“African spirituality is something that has been very heavily demonised; The Bahamas is the quintessential example of that. It’s to the point where Voodoo and Obeah remain illegal to this day. These are just vestiges of our colonial masters trying to strip our African identity away - something that was a concerted and global effort that is ongoing. When we look at the spiritual aspect, it taps into something that was lost, something we still do. We still drink cerasee… Bush medicine is still an intricate part of us. Even the way they ring the cowbell in the Ahanta region is the same way we do it here. I’ll hold off on that and encourage people to go out and get the book so that they can get some of the deeper spiritual connections between us and the Ahanta people that expand beyond the empirical data and anthropological data that we have been finding over the years.”

Prior to his coronation, two women of Sankofa Flamingo received honourable titles and positions in the powerful traditional council as well. Christopher’s wife is now Nkosuohema Tamara Scavella-Davis, Queen of Progress and Development. Angelique McKay received the title Queen Mother Asafokyereba of Pokesu and the Ahanta People of West Ghana. She is actively making arrangements for the details of the Sankofa Flamingo Heritage Tour in October. Dr Michael Pateman, Robin Lightbourne and Oswald “Ras Copper” White are among the Sankofa Flamingo members who have been active in this new era in Bahamian connection with Africa. Well known businessman Andrew Wilson, who has already established a factory in Ghana, was on-hand for the coronation, as well as cultural ambassador Jamaal Rolle.

Mrs Ann-Marie Davis received a royal welcome during her Ghana trip. She told the press there that it’s important to celebrate the origins of Junkanoo, as well as to celebrate the way the festival has expanded in The Bahamas and elsewhere. She stressed the importance of historical, cultural and educational connections being fostered and sustained for the benefit of the Bahamas and Ghana. She also expressed personal pride in her son, Christopher’s achievement.

“You hear about westerners returning to Africa and receiving titles, but you rarely hear it happening on the top traditional council level - and rarely where someone received the stool name of the greatest warrior from that group of people,” Christopher explained.

“I am completely lost for words. I have to think so hard just to describe what it means to me because it is by far, arguably with the exception of the birth of my son, the greatest honour I have ever received.”