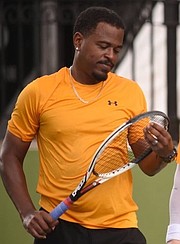 The team was playing in the week-long American Group III competition at the Costa Rica Country Club in Escazu.

The Bahamas was placed in Pool B against teams from Costa Rica, Paraguay and Jamaica. Pool B consisted of Venezuela, Panama, Puerto Rico and Venezuela.

“It was definitely a tougher Zone two than it was in the past,” Rolle said. “But the guys overall played very well. We didn’t have KJ for the whole time after he got injured in our first match. We had to put Baker in, and he played well. Overall, it was a good performance. At least we were able to stay in the zone and not get relegated.”

Rolle noted that if they had Justin Roberts on the team, he would have helped tremendously. Roberts was not named to the team because he didn’t participate in the trials. Roberts was named to the last team by virtue of being the top ranked international player for the Bahamas.

But Rolle said after he got hurt and was unable to play any tournaments, he was expected to play in the trials, but he decided not to. He noted that although the Newmans did their job, Roberts would have been a great addition.

The Bahamas’ match-up against Guatemala was a crossover in the relegation playoffs after the Bahamas ended up fourth in their poll with a 0-3 win-loss record, while Guatemala was third in their group at 1-2.

In the final showdown, Baker Newman secured the first singles win for The Bahamas in straight sets 6-2, 7-5 over Sebastian Dominguez, while Major Jr won 6-1, 6-2 over Kaen Hernandez.

With the tie completed and the match secured as the Bahamas avoided relegation for 2023, the doubles match was not played.

In the rest of the tournament, Paraguay won 2-0 over Venezuela and advanced to Group II along with Jamaica, who knocked off Panama 3-0 in their playoffs.

The Bahamas, Panama, Costa Rica and Paraguay will remain in Group III for next year, while Guatemala and Puerto Rico will be relegated to Group IV.

On the first day of competition on Wednesday, Team Bahamas fought hard against top seed Paraguay but came up short. Paraguay took the two singles and Bahamas won the doubles.

Spencer Newman played in the singles and lost against Juan Borba 3-6, 3-6.

The Bahamas suffered a setback as Major Jr lost the first set 5-7 to Daniel Vallejo and had to retire at the end of the first set due to a leg injury.

Rolle, who has the most success on the team as a Bahamian in doubles, teamed up with Baker Newman to give Team Bahamas its first match win with a thrilling, three setter over Vallejo and Del Puerto of Paraguay 6-2, 5-7,7-6(5).

As usual, Rolle and Spencer Newman secured the doubles match for The Bahamas 6-2, 6-2 over Jamaica’s duo of Jacob Bicknell and John Chin.

Rolle and Baker Newman, however, fell short in doubles 3-6, 2-6 to Flores and Pablo Nunez.

The Bahamas Lawn Tennis Association (BLTA) thanked Rolle, Major Jr and the Newman brothers for a strong showing at the Davis Cup in Escazu. “Their dedication and hard work were evident in Costa Rica. Despite the injury challenges the team was able to end the tournament with an important win,” the BLTA wrote. “They ensured that The Bahamas remains in the Group III.”