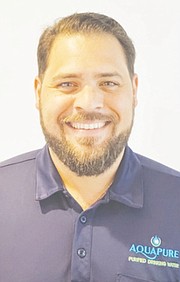 A Bahamian bottled water supplier has endured "an horrendous June" after equipment failure and a "bonkers" supply chain cut production for the month by 40 percent.

Christian Knowles, Aquapure's chief of operations, told Tribune Business he was "crossing my fingers" that output will return to regular levels today following what he described as "a nightmare" four weeks due to the company losing up to 2,000-3,000 units of production per day.

He revealed that one of the company's "worst months" was sparked when the machine that "blows" all its five-gallon bottles broke down, forcing it to scour the globe for a replacement part. While able to source one fairly rapidly, Mr Knowles said it was located in COVID lockdown-hit China and, despite paying for priority air freight, it became stuck in DHL's warehouse there for two weeks before finally reaching the US state of Ohio on Friday.

Optimistic that the replacement part will reach Aquapure's Bernard Road headquarters today, he added that Aquapure's traditional back-up supply of five-gallon bottles - sourced from the Dominican Republic - had also become entangled in the global supply chain backlogs that have built-up post-pandemic.

Mr Knowles added that bottles acquired from that Caribbean nation were now taking up to 12 days to reach The Bahamas, further worsening the bottled water manufacturer's June production woes. However, such a shipment had just arrived when he spoke to this newspaper, and he expressed confidence that Aquapure would be able to resume sending out "fully loaded" trucks of five-gallon bottles to its depots and clients over the weekend.

Revealing that it previously had to "ration" some delivery routes to ensure customers received "something", Mr Knowles said he was "kind of reluctant" to calculate what the financial impact and loss will be while describing it as "significant".

And, under pressure from "insane" freight shipping rates and raw material cost increases from suppliers, he disclosed that Aquapure may soon have to discuss internally whether it will have to raise prices to Bahamian consumers which is "the last thing we want to do" given the present cost of living crisis.

Affirming that "every single one" of Aquapure's raw material suppliers have increased their prices, some by as much as 100 percent with the average around 40 percent, Mr Knowles said the price for a 40-foot container from China had near-tripled compared to pre-COVID levels.

"We've had a drop in the supply of our five gallon bottles for a few reasons," he told this newspaper. "Our machine broke down about almost four weeks ago, and I've been waiting for a part from China. It blows all my five-gallon bottles. But China has these rolling lockdowns because of its zero COVID policy.

"Once I finally got the part, it was amazing to get it shipped to us. The DHL warehouse had so many lockdowns that goods were piling up. I paid $700 something to get a priority space, fast air freight, and it stayed there for 14 days. It's in Ohio now. It got to Ohio [last Thursday]. I was hoping to get it on Friday, but it was still in Ohio. It's a nightmare."

"It used to take ten days, six days if you caught the boat right, but now it takes 12 days. The good news is a shipment of five-gallon bottles just came in. They're at my loading dock, we're about to get them cleared with Customs, and then we can start cleaning and filling those bottles until 9pm-10pm tonight. I was so excited when I saw those containers pull up.

"Hopefully we will be back on track by Monday and be able to give full truck loads to go out over the weekend. Hopefully we get the part Monday [today] and fix the machine. We do see some light at the end of the tunnel, and we should be pretty good next week. But June was an horrendous month, one of the worst months we've had in a long time, because of supply."

Mr Knowles told Tribune Business that the machinery and supply chain woes had combined to slash Aquapure's production by 40 percent compared to normal levels. "I'm down on five-gallon bottles by 2,000 to 3,000 units a day," he revealed, "and we move a whole lot this time of year because it's summer. We've been down to 60 percent of what we normally do at this time of year.

"My smaller packaged water has not been affected by the supply chain, but we've had to ration our routes just to get everybody something [on the five gallons]. We had to make that decision. In terms of jumping through the hoops and lost production, when you're talking about losing the movement of more than 2,000 units a day, 3,000 in some cases, that's money out the door that you won't recoup. If you don't sell product that day, you cannot pick it up the next day.

"It's been a tough June. It's been a really big problem, and it's kind of significant in terms of the financial impact. I'm kind of reluctant to add it all up. I want to keep moving forward. Sometimes you have to take a licking and keep moving forward. There's hard times, but if you keep moving to solve problems, solve the issues, that's pretty much the singular focus you should have."

"However, we now have a resolution in sight and should be back to normal production levels by early next week. For those who may have experienced a delay in your five-gallon water deliveries, we apologise and thank you for your understanding."

Aquapure's production issues hit amid growing inflationary pressures that are challenging the company's ability to continue absorbing rising input costs, forcing it to mull whether price increases to consumers may be warranted if the situation persists for much longer.

"We have an issue. Everybody raises prices on us, all my suppliers, every single one and, in some cases, significantly. How are we supposed to raise our prices to the end user? Water is a necessity, it's a necessary commodity. How am I supposed to propose price increases for our customers? We've absorbed most, if not all of that, so far."

Mr Knowles said Aquapure is focused on producing "a quality product with quality processes", meaning it is not the cheapest product on the market. "We're a large enough company to absorb some of that," he added of rising input costs, "but a prolonged period of that is not sustainable, and not conducive to our long-term future.

"The last thing we want to do is raise prices to customers. You guys are our boss, you guys pay our bills. We've done everything we can to put in more efficiency and minimise costs as best we can so we can absorb higher freight rates and costs, but at this point we're seriously looking at pricing. We may have no choice; that's the difficult decision we face now. The larger the financial burden is, the bigger the internal discussion."

Shipping freight rates, Mr Knowles said, had seen just as steep an increase as raw material costs. He revealed that Aquapure's Texas-based resin supplier had been quoted a 60 percent freight rise by Mediterranean Shipping Company (MSC) despite possessing an existing contract with it.

Branding freight rates "insane", Mr Knowles said a 40-foot container containing five-gallon water bottle "pre-forms" had once cost $6,000-$6,800 to ship from China but the last two sourced from that nation cost $17,000 apiece - almost triple the price. He added that a colleague of his who sells machinery had been quoted $30,000 for a similar sized container from China last year.

"To see what's happening with the global supply chain it's mind-boggling. It's bonkers," Mr Knowles told this newspaper. "Nobody seems to want to do anything about it; all they want to do is belly ache." He added that major shipping companies appeared to be focused on the major developed markets to the extent that they were neglecting small nations such as The Bahamas and regions like the Caribbean.

Translation: "Aquapure will soon be increasing its selling price for both 5 and 1 gallon bottles of water by at least 40%."

And cruel Davis will be the first to tell the less fortunate among us, "If you can't afford drinking water, then you really don't deserve to live."