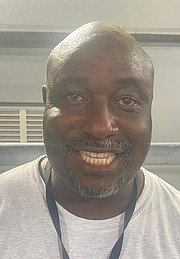 IN a keenly contested election of officers on Saturday, Blue Chips Throwers Club founder and head coach Corrington Maycock was voted in as the new president of the Bahamas Association of Athletic Coaches.

Maycock, in replacing out-going president Shaun Miller Sr, won the post over Bernard Rolle in the foyer of the Thomas A Robinson National Stadium during a break in the Bahamas Association of Athletic Associations’ National Track and Field Championships.

“Everyone is on board. Sometimes you have some concerns, but I’m not overly concerned,” Maycock said.

“I believe that we will work together to get the job done.”

Already, Maycock and his executives have some plans to put into motion.

“We’re going to start with our coaches’ education and we are going to work with our constitution because there are some loopholes that we have to fix,” Maycock said.

“Also our goal is to fix our middle and long distance running programmes.”

When asked about the field programme, which he specializes in, Maycock quickly quipped that “we’re good. We don’t have to worry about that right now. We sitting pretty with that.”

As for the Family Islands, Maycock said that is one of the critical points they will be addressing during their coaches’ educational forum.

“We want to make sure that they are up to par with Nassau and Freeport (Grand Bahama),” he pointed out.

If there’s anything the coaches can look forward to from Maycock and his administration, it’s transparency.

“The main thing is we want to be fair and transparent across the board,” Maycock insisted.

On the work done by his predecessor Miller Sr, Maycock said he believes they got handicapped because of COVID-19 and they couldn’t execute all of their plans.

“We’re going to piggyback on some of their plans,” Maycock said. “We want to be one of the best executive boards to cross the finish line.”