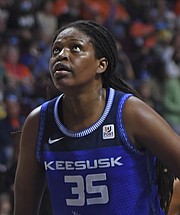 It was Jones’ sixth double-double of the season for Connecticut (13-7).

Candace Parker had a season-high 25 points, 11 rebounds and seven assists, Kahleah Copper scored 15 points and the Sky got the win over the Sun 91-83 for their fourth straight victory.

Connecticut went on a 7-0 run to get within 82-74 with 2:18 left in the fourth quarter. But Rebekah Gardner ended Chicago’s drought with a 3-pointer and Emma Meesseman made two free throws on the Sky’s next possession for an 87-76 lead.

Allie Quigley added 13 points for Chicago (14- 5), which is off to its best 19-game start in franchise history. Azura Stevens and Gardner each scored 10 points, and Courtney Vandersloot had nine points and six assists. For the Sun, Alyssa Thomas added 23 points and Brionna Jones scored 18. DeWanna Bonner was held to eight points on 3-of-12 shooting and Courtney Williams was 2 of 10 for six points.