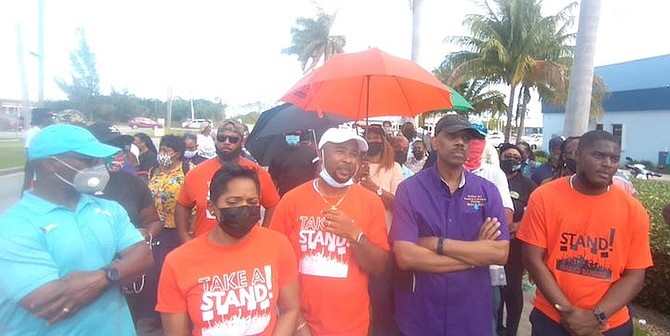 Seen second from left are Sarah and Darren Cooper, along with Rev Frederick McAlpine, up front leading a march to and from the Grand Bahama Port Authority Headquarters Building in Downtown Freeport on Friday. The group delivered a letter to GBPA president Ian Rolle outlining their concerns about the state of Freeport and its economy. Iram Lewis, FNM MP for Central Grand Bahama, seen far left, also marched with the group. Photo by Denise Maycock

CONCERNED businesspeople and residents on Grand Bahama participated in a peaceful march to the Grand Bahama Port Authority headquarters on Friday.

They called on the executives and principles to live up to the obligations and vision in the Hawksbill Creek Agreement to grow and develop Freeport.

Businessman Darren Cooper, along with Frederick McAlpine, former MP for Pineridge, and a crowd assembled around 10.45am at the steps of the building in Downtown, Freeport.

A letter outlining 10 items of concern was hand-delivered to GBPA President Ian Rolle, who also spoke briefly with Mr Cooper and the marchers.

Mr Cooper claims that the Freeport economy has suffered greatly due to the lack of vision and performance, and neglect by executives at the Port Authority.

Freeport needs a new airport and hospital. Another issue of concern is the number of dilapidated buildings throughout the city. Businesses are struggling, unemployment is high, and the cost of living has increased in Freeport. But perhaps the biggest concern is the lack of new major foreign investment to the island by the Port Authority in nearly 20 years.

In a flyer circulated on social media on Thursday, the outspoken businessman called on people who are concerned about the state of the island’s economy to march with him and take a stand.

The scene outside the Grand Bahama Port Authority headquarters on Friday.

Many people turned out, including Mr McAlpine, independent candidates, and Iram Lewis, the FNM MP for Central Grand Bahama.

Grand Bahamians are hurting, he said “because those who sat in positions of power for so long neglect to work hard and feverishly for the people.”

“I am very satisfied we were able to deliver a letter of concern for the residents of GB. I am satisfied to have the former MP and present MP and also some independent candidates stand with us. I am also honoured to have business owners who took time out to be with us and voice their concerns. And residents who are feeling the real brunt of being unemployed and not being able to make ends meet.

“. . .I think it sends a very good message to the Port Authority, and it also sends a message to the government of The Bahamas that the people of Grand Bahama will not sit idly by much longer and allow us (Freeport) to continue to deteriorate. We are going to keep their feet to the fire and make sure that we get what we deserve. And if we don’t get it one way, we will get it a next way. And so, they will either bend or break.”

Mr Cooper said the Port Authority has been given 30 days to meet with them and address the concerns in the letter.

For his part, Mr McAlpine criticised the GBPA for failing to fulfil its obligation to Freeport under the Hawksbill Creek Agreement (HCA), of providing an airport, hospital, and additional schools.

“All the Port Authority is doing when it comes to Grand Bahama is collecting monthly and keeping it to themselves while the rest of us are suffering. They have become a major tax collecting regime which hurts us as a people. And so, it is time now for us as a people to be heard and for us as an island to progress.”

He also raised issues over the GBPA’s approval of a 3.3 percent increase in the electricity rate.

Mr McAlpine also noted that since the death of the late chairman Edward St George there has been no new investment in 18 years.

In addressing the crowd, Mr Rolle said the GBPA is open to any constructive criticism.

He further stated that people do not understand the HCA.

“We want to be the best in terms of delivery to services and our responsibility under the HCA,” the GBPA president said. “There are some people who do not understand what is in the agreement and I encourage you to please read that agreement and all the amendments. Right now, there (are) too many emotionally charged persons who lack the knowledge because they have not read it.

We UK Colony's reluctance with 'no other option' but be quick to stand tall with EU united against duh waring Putin will open colony's Freeport to swift and even more painfully restrictive economic measures than duh financial crisis of 2008, Hurricane Dorian and COVID combined,― Yes?

Thats a cop out. Its known that Bahamians don't read, if you are truly interested in educating Bahamians about the agreement have a forum. McAlpine said they have 10 questions. Answer the 10 questions before the meeting, The group can say whether the answers are sufficient then have the forum to relay the messaging on those questions. Anything else is deliberately obsfuscation and unworthy of a group claiming to have the public good at heart

Where is Greg, the ex PLP MP? He can explain the HCA

It would have been nice to see the 10 items of concern.

In addressing the crowd, Mr Rolle said the GBPA is open to any constructive criticism.

He further stated that people do not understand the HCA.

So why Mr. Rolle does not come out and say what is it that the people presenting their concerns do not understand about HCA? Trying to throw innuendo and shade without manning up is just poor on his behalf.

Where's all de pictures evidence in support concerned Conchy Joe uninhabiteds', or as so claimed by McAlpine, to have joined in a peaceful march to the Grand Bahama Port Authority headquarters on Friday, cause I ain't see de faces, dooes any youse,― Yes?