Deadly risks of release on bail 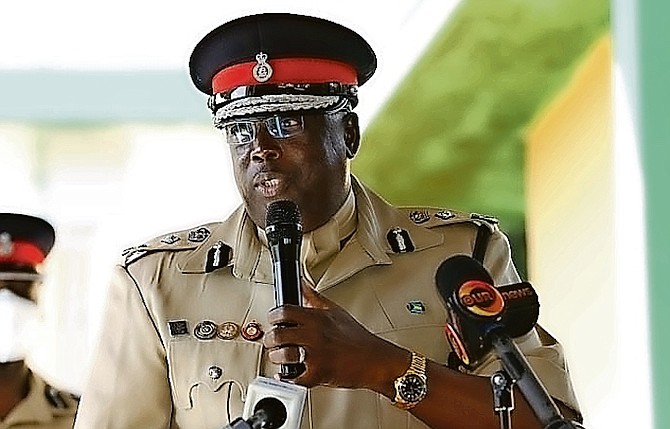 POLICE Commissioner Paul Rolle said yesterday it appears that getting bail for murder “is almost certain death” adding that there are people in the country who are willing to use lethal force to settle their disputes.

He said the mindset of the Bahamian people has to change.

His comments come after a triple shooting incident occurred in Millar’s Heights off Carmichael Road on Saturday. Police said two men and a woman had to be taken to hospital after being shot by a lone gunman. However, one of the men later died of his injuries.

The murdered victim was Franklyn Glinton, who was charged with the 2020 killing of 17-year-old Lavard McKenzie. Glinton and his co-accused were granted bail months after their arraignments.

When asked about how often people on bail are being killed, Commissioner Rolle pointed the media to crime statistics and explained to reporters that this is not something that just started to happen. He added it has been going on for “a while”.

“I don’t have any control over the decisions of the courts,” the police chief said. “I stay in my lane, but we know for a fact that persons charged with serious offences - particularly murder and get bail - we’ve seen too much within a matter of weeks that they’re being shot and killed … I think somebody said some time ago that getting bail for murder is almost certain death and I would hope that all of us, those responsible will take those things (onboard). But you know people are entitled to apply for bail.

“The part of the problem is people get bail and they go right back into these same communities where the reality is we have persons, too many, in this country that are willing to use lethal force to settle their disputes and that mindset of the Bahamian people has to change.”

“Let me put it like this — judge me on my responsibility. I’m required to keep The Bahamas safe to prevent crime and where crime is not prevented, is committed, to investigate and to bring persons to justice. Ask whether I am doing that and the police are doing that. I say yes.

“I cannot and will not speak for the Department of Public Prosecutions or the courts — that’s not my lane. You could go and speak to the director of public prosecutions; find out from his views and the chief justice, but as far I’m concerned the police officers are doing an excellent job in meeting our mandate and we will continue to do that. Once the matter is placed before the courts that’s out of my hands. I move on to the next matter.”

Commissioner Rolle also said that on Wednesday, his policing plan is going to be presented in Parliament.

For now people don't go up to random people and shoot them in the head - something happened prior to a killing like this.

This system is far from ideal but unfortunately it is more effective than the legal system we have in place at the moment.

At least, it gives the illusion of satisfaction. Which is way more than what these suckers of our public treasury provide.

IS THIS MAN, the commissioner, pretending this is new information, or just new information to him? This incidence of young men being charged with murder and locked up has been going on since the 1990’s. Many and their families maintain their innocence until they are murdered and even thereafter. And because some are gunned down and murdered just moments v after walking out the prison gates, the MINDSET of the BAHAMIAN people is that police are involved. Maybe not (always) as a unit, but the opinion of the public is that SOME POLICE us the cover of their uniform and the resources of the police force to commit crimes, murder even. That is one problem. The other is the slow moving or inadequate working of the Justice system. It takes a few seconds for someone to go out and commit a murder. But it takes many man hours of investigation, case preparation witnesses locating and trial to bring a killer to Justice. So hence the murder crime in the country is always a run-away horse. That is yes, until the mindset of the public changes. Persons accused of murder must be proven guilty beyond a reasonable doubt. Because the mindset today is ‘. Well he charged with murder but I ain’t sure if he do it. Because them police pin on murder on my nephew also. And when he get released on bail, they killed him. So no one still knows if he does it or not. But the family know he ain’t do it.’ The mindset of the Bahamian people must be MURDER is WRONG and will NOT be tolerated. JUSTICE will be swift and decisive! Every death in the country must be fully investigated. Whether it occurred in government house or in a busy street in the middle of the day under the bright and scorching sun. Paul Rolle’s job at s not an easy one.

The commissioner should think before he speak, almost sound as if he is calling the shooting a result of retaliation. And this could results on the original victim family being targeted as another form of retaliation. Or could it be the killer got bail so quick that he came out willing to do it again and the other person wasn't taking any chances and got to him first. See how this could be twist and turn? Sound like the police pointing fingers and trying to avoid the question "What are you doing about it"?

POLICE Commissioner Paul Rolle said yesterday it appears that getting bail for murder “is almost certain death” adding that there are people in the country who are willing to use lethal force to settle their disputes".

Commissioner Rolle, you ought to be commended rather than criticize for being so frank and honest about the actual dilemma of our youths and young offenders. However, like I have said to you before and have been saying ever since I came back from law school in 2007, there is no light in the tunnel of our justice system. There is no resolution in our court system. The administrators of justice are either too inept, incompetent and/or, simply corrupt. But because this point of view is coming from an ex-convict, it goes unheeded.

I was thrust out as an outcast when I applied to be called to The Bahamas Bar. The haters killed hope by rejecting me. Now look at what we got!!! Those who were approved, are you satisfied with their performance? Apathy is just as bad or worst.

Rolle is clearly blowing his dog whistle for more vigilantism. Without this street justice we would probably have as many murderers and serial rapists walking around on our streets as we have corrupt and incompetent elected officials, senior members of the civil workforce and lawyers.

There's really not much more Rolle can do but blow his dog whistle given all of the corruption that now exists within our judiciary, the public prosecutors office, the Bar association and the office of the attorney-general. As the saying goes, "Tings now real tough!"

It all began when a certain other country declared war on the Black males of this country. Do your research dude. But the chickens are coming home to roost.

"It all began when a certain other country declared war on the Black males of this country."

You post this in mockery but it is exactly the truth. Why is there a war going on today? Ask Russia and ask America. We were always taught as lil black barefoot and shirtless boys to live and respect America and hate Russia with our guts even. But we grow up now and can afford shirt and shoes and even gas for our cars , at least sometimes, but who’s right and who’s wrong!?

More police in the US have been sent to jail for racially mot murder in the past three years than any other time in tgat country’s history. Yes the police killed more Blacks in the ‘60’s and 70’s in America, but they got away with it. Today not only are Blacks willing to stand up for their rights as are families of murdered victims, but there are more rights groups willing to stand up and more qual lawyers willing to go to court for these peoples rights. Here in the Bahamas, Bahamians must become a United force and stand together to ensure police are not involved in murders in this cou, not just committing them but also not instigating them,

How do you change the mindset, mr. Rolle. Who changes the mindset? The sperm donor/father whom is deliquent or the partying mother that drops off her child to the grand mother or PMH for the weekend just to practice having another at the club?

Rolle just tell it like it is. Many want the Police alone to pay while duress of life or death desicions are made. Yet willful murder goes quite with public consent. If the Police had intelligence that most who released after violent crime goes down two weeks the most but they invene and persons are hurt then the police do an innocent man and should be hung. Police hands are tied and the public will cry more because they don't like their own system not supporting them. Only legitimate vengeful killers for hire have rights and protection.

How does Americans get Bahamians to support American influence in the war against Russia. ? # WALMART!!