Duke and Duchess of Cambridge welcomed to The Bahamas 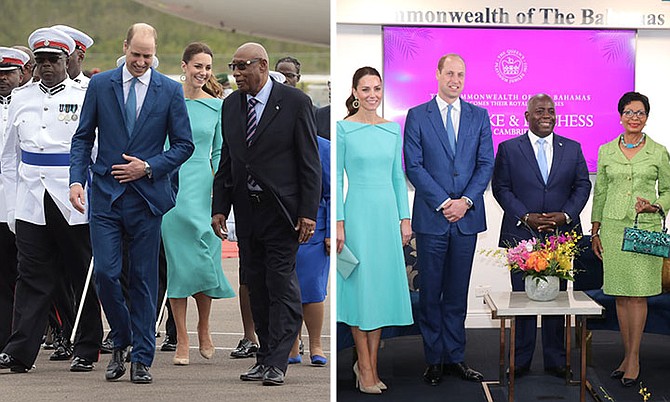 Prince William and Kate Middleton, the Duke and Duchess of Cambridge, were welcomed with warm smiles and festive music at the Lynden Pindling International Airport after arriving in the country today.

Among those present to greet the Royal couple at the airport were Governor General Sir Cornelius A Smith, Deputy Prime Minister Chester Cooper and Attorney General Ryan Pinder.

The couple will be in The Bahamas for three days to mark the Queen's Platinum Jubilee celebrations.

Welcome England's and Commonwealth Realms future Comrade King William and Queen Kate and Prince George could inherit his father's Dukedom.
"Long live the King!."
Together, including we colony and Canada, New Zealand and Australia, there are some 150 million English Subjects in the Commonwealth realms, ― Yes?

A wonderful welcome to the Royal Couple . We are proud of our history,our heritage and I am sure they will have a lovely and meaniingful visit to our country.

I thought the Minister of Health said their would be strict COVID protocols. How is it then thst not one person in the photo, and they are from different households, are not wearing a mask?

You imagine the Royals coming down with covid now. We would certainly be global news then.

So are these showers of blessings or tears of an Angry God?

Looking at the pictures of the future King and Queen upon being greeted by the likes of ‘Brave’ Davis is truly an example of grace amid hypocrisy!