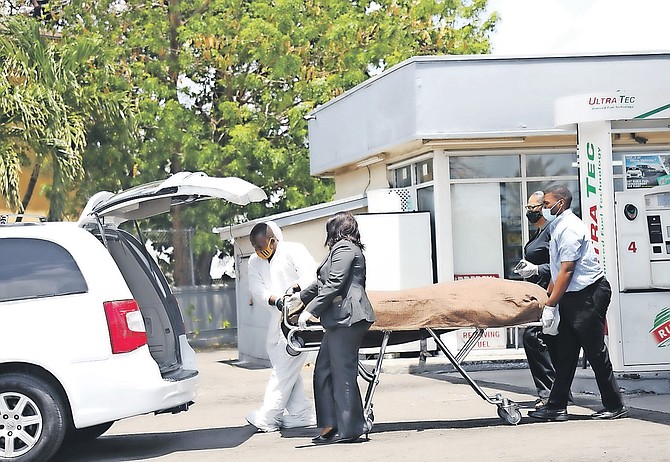 POLICE at the scene of the homicide at the Rubis gas station on Mackey Street.

TIMOTHY Saunders, the convict killed at a gas station on Monday, was approved for the Bahamas Department of Corrections’ work scheme under the Minnis administration, National Security Minister Wayne Monroe said yesterday.

Mr Munroe said Saunders was near the end of his 18-year prison sentence, having been set for release in 2024 following a manslaughter conviction.

Mr Munroe said Saunders was approved for the work scheme on September 13, 2021, and began the work in February. He was killed on Monday at a Rubis gas station at Mackey Street and Madeira Streets.

Mr Munroe’s comments came after his predecessor, Marvin Dames, told The Nassau Guardian the incident must be examined to determine why Saunders was even selected for the programme.

“We ought not to play politics with this. If (Mr Dames) didn’t think people charged with homicide should be on the scheme then he shouldn’t have approved any,” Mr Munroe said.

On the advice of Police Commissioner Clayton Fernander, the prison has suspended the work scheme “for security checks and rationalisation” for people who have been convicted of murder or manslaughter, Mr Munroe said.

He said there were 17 people on the programme, 11 of whom were serving sentences for murder or manslaughter. All were approved under the previous administration.

“Others who aren’t convicted of these things we saw no reason for them not to continue in the programme but based on what happened I’ve had the conversation with the commissioner of police and the commissioner of the prison and it was decided to take this action,” Mr Munroe said.

“I don’t take any issue with these persons being approved for the work scheme because it’s supposed to be independently administrated. You must look at persons’ response, how close they are to release, whether they have been rehabilitated, how likely they are to commit a crime. The thinking is that with such little time left on their sentence, they are unlikely to break the rules and we need to get them ready to go back into society and so we don’t want to release them broke.

“If the argument is that having him outside the prison after being convicted of this offence, having served time makes him more vulnerable to an attack like this, then what do you make of the fact that he would be released in a short period of time? That fact won’t change, that problem won’t change. The problem is with the person involved with his murder. If that person has a bad mind, he’s either going to act in a year or in two years time.”

Mr Munroe said nothing related to the work scheme has come for his approval so far in his tenure.

Yet again, both parties showing why there are issues with our country. Situations like this should only be dealt with by independent bodies. no politician should be able to approve someone to go on work scheme. Only the independent body which should be given whatever criteria is necessary to make their decision.

I do not see both, I only see one party playing forgetful.

Strange that a party, living and seeing after been given another chance at governance ... ought not to want to be seen as the party that thinks its such a wrong thing to offer the same opportunity to others. ― Yes?

It seems that the deceased would have been a target regardless of whether he was on a work programme or released from prison at the end of his sentence. The person who killed him was obviously on a mission, and sadly had it not happened now, in all likelihood it would have happened upon his release in 2024. I would start the investigation with known contacts of the person Mr. Saunders was convicted of killing. They would have the most to gain from Mr. Saunders death- vengeance or revenge.

I still do not get why the prison itself does not have an exchange or multiple prison owned small businesses. Farming, wood work, car washes, and the lists goes on done on the compound with funds going to the prison and ensuring workers are paid.

IT IS A DISGRACE even for the media to publish this story in its present context. Firstly, yes the ‘convict’ was approved for a work scheme and he was participating in that work program. And to the present time (now) there are no reports that he was breaking any of the rules of the program that led to his demise. And yes, unfortunately the killing took place at a business establishment that, apparently was participating in the prison work scheme. But the point everyone seem to overlook is that this man/convict had served some 17 years of his 18 year prison sentence and was scheduled to be released in less than a year. So the fact is that because he was participating in a work program is immaterial to his death. Like ke others who have been gunned down when released from prison or even on bail, this man may still have been killed when he was released next year. The sad thing is the people pointing fingers and passing the blame. They ALL hate to admit they cannot keep the public safe anymore. And anyone coming out of prison even ACCUSED of murder will face certain deaths. The horses are running fast now.!

Yes, why don't the prison have some type of program in the prison compound to help with when they get out, for example, block making, blocks are a very, very, very important component that is needed to build strong hurricane durable homes, why is it that maybe three or four companies can produce enough blocks for the market with maybe 40 employees in all, and we have hundreds of prisoners sitting down doing nothing? Our governments all of them joking, blocks are being sold by these companies for roughly $3.00, and at the prison, we would be able to buy blocks for a third of their prices, $1.00

“ I looked up and saw a horse whose color was pale green. Its rider was named Death, and his companion was the Grave. These two were given authority over one-fourth of the earth, to kill with the sword and famine and disease and wild animals.‘