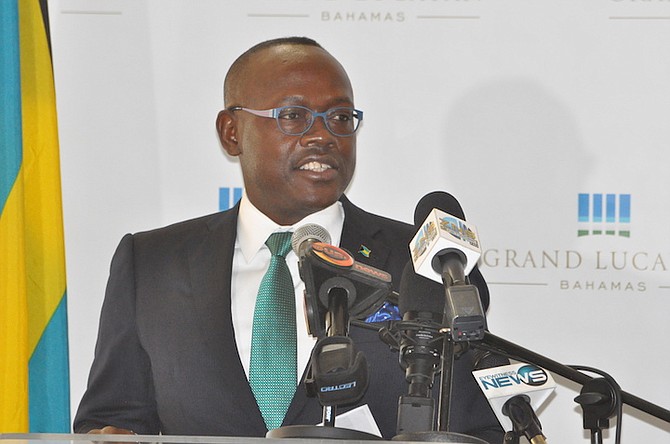 ACTING Prime Minister Chester Cooper said he will disclose details of the Minnis administration’s sale deal for the Grand Lucayan Resort that was cancelled by the Davis-Cooper administration after coming to office.

While in Grand Bahama Wednesday, Mr Cooper told reporters he will provide details early next week.

“I will speak to it on Monday, he said after announcing a buyer for Grand Lucayan Resort on Wednesday. Today is about the future. I will talk about the deal that had been in place, and I would provide all the details.”

Mr Cooper, the Minister of Tourism, Investment, and Aviation, criticised the initial deal between the government and Royal Caribbean Cruise Line and ITM Group under the Minnis Administration as an “egregiously bad deal”.

Electra America Hospitality Group was selected as the new buyer from among five potential bidders vying to purchase the resort property. The US conglomerate is offering $100M to purchase the Grand Lucaya. They also plan to invest $300M to renovate and redevelop the property. There is a 60-day due diligence period, with closing no later than 120 days.

When asked about the deciding factor, Mr Cooper told The Tribune that among other things, significant resources were one of the key components in terms of the acquisition and in terms of the renovations.

He also said that when looking for a partner, they also sought one who is committed first to a shared vision of GB, with a vision for the resort, appropriate resources, and a commitment to community.

“And with all those attributes we found in Electra, we determined they were the winning bidder,” Mr Cooper said.

Russell Urban, Electra principal and managing partner, said they are looking to attract well-known brands at the property. He was also asked whether there would be a name change.

He responded that he suspected that “Grand Lucayan” will be a part of the fabric of the report “no matter what.”

Mr Urban also said they will have a casino operator who will be a part of one of the brands that they choose for the hotel.

Must you always look backwards and finger point? How about waiting until this "New Day" deal is finalized before crowing or you might have to eat crow. Just sayin'...

Like Minnis, Chester the Jester is only ever concerned about trying to score cheap political points and could not care less about the Bahamian people. Government will likely never receive anywhere near $100 million from 'his' pre-maturely announced deal at the end of the day, but that doesn't stop Chester the Chester from beating his chest. LMAO

Better fully disclose the Electra deal. Nowhere $100,000,000 cash unless government refunds them $200,000,000 taxpayers ( not government) money. Government is fiduciary trustee of Bahamian people and all taxpayers here. Should be reminded daily. Let’s follow up in 60 and 120 days.

What, i think we would want to know about this deal not a cancelled, dead deal. Lol, wtf.

He insisted it would be sold at 150.oo Million whats the deal with the 100.00 million