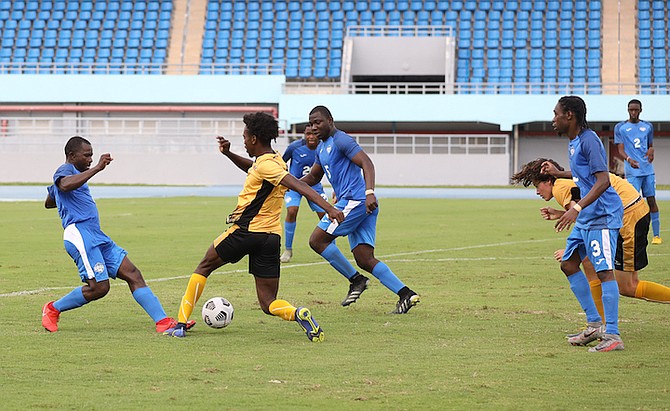 AFTER winning their opener by a pair of goals, the Bahamas men’s national soccer team lost by one to the Turks and Caicos Islands in the second game of their two friendly matches played over the weekend at the Thomas A Robinson National Stadium. Photos by Racardo Thomas/Tribune Staff 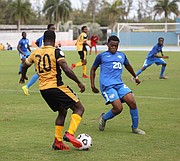 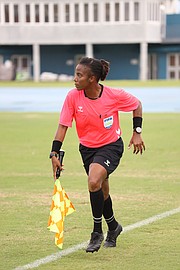 AFTER winning their opener by a pair of goals, the Bahamas men’s national soccer team lost by one to the Turks and Caicos Islands in the second game of their two friendly matches played over the weekend at the Thomas A Robinson National Stadium.

Thanks to goals from Wood Julmis in the 10th minute, Daylan Russell in the 34th and Lesley St Fleur in the 45th, the Bahamas took a 3-1 lead into the half and added their final goal in the 64th from Evert Julmis in the second half to hold onto the win.

Turks and Caicos, who got the equaliser from Cory Williams in the 10th minute of the first half, added their last goal in the 62nd from MarKenley Amilcar, but it wasn’t enough to push them over the top.

Saturday was a different story.

Turks and Caicos jumped out to the initial lead in the 25th minute as Billy Forbes found the back of the net in the first half. They extended it to 2-0 at the 48th mark on Junior Paul’s boot. The Bahamas redeemed itself in the 65th minute on Wood Julmis’ goal, but they fell short.

“Over the two days, it was really good,” said Bahamas head coach Nesly Jean. “We really put on the match to see how the team would look going into the games on June 3. We tried new players just coming on the team and using some different formations.

“They’re buying into what we’re trying to do and hopefully by June 3, we will be ready to go.”

The Bahamas Football Association used the friendly matches to prepare the team for the qualifying round of the CONCACAF 2022 Nations League where the winner and the top teams advance to the playoffs.

The Bahamas will open up play in their pool on June 3 at the TAR National Stadium before heading on the road to play Trinidad & Tobago to play on June 10. Their final pool play match will be against Nicaragua. Jean said by the time the tournament gets underway on June 3, the Bahamas should have its full team in place.

“We have a lot of players who haven’t arrived yet. They are still overseas of to school. They should be here by next week,” he said. “Once we bring them in and everybody understand what we are trying to do, I think we will do well.”

For those players overseas, Jean said they have been provided with the formations the team will be using through a WhatsApp group, so it shouldn’t be a problem for them getting adjusted to what they need to do when they come home.

Keith Jeffrey, who took over as the head coach of the Tucks and Caicos three weeks ago, said he was impressed with the way they played, going home with the split as they now prepare for their pool play against Bonaire in their opener on June 3 before they follow that up against both the US and British Virgin Islands.

“Coming after the first game and what we came out and did in the second game, we had a better idea of what the Bahamas is offering and we were able to play to our strength and took away their strength,” he said.

“I want to commend the players for their hard work and I think going forward, going into the Nations League, this is a morale booster for us. I think we will be very good.”

With most of their players employed in the fledging tourism and construction industries, Jeffrey said he has been forced to work with who can make it out for their early morning practice or late evening sessions. As a result of their performances here, Jeffrey said the plan has worked for Turks and Caicos.