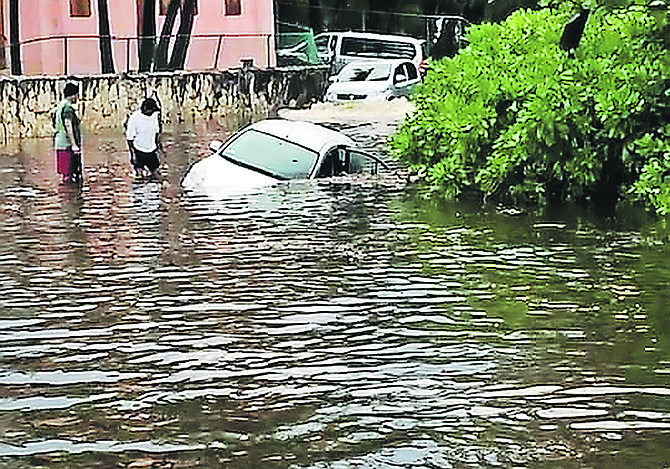 A CAR swallowed up in flood water over the weekend as a record amount of rainfall hit New Providence. Photo: Racardo Thomas/Tribune Staff

Wayne Neely, a veteran weather forecaster, in a post on Facebook over the weekend said the rain resulted in hurricane level flooding throughout the western part of New Providence including the areas of Cable Beach, West Bay Street and Coral Harbour.

In explaining the significance of the flooding, which left several cars stalled out on the road, Mr Neely said that it is not unusual for rain in May but this level of rainfall is unprecedented, with the average rainfall for the month only hitting around six inches.

Basil Dean, former deputy director in the Meteorology Department, echoed Neely’s sentiments that this was a near record amount of rainfall in the nation’s capital.

A resident of Cable Beach himself, Mr Dean described how he had to use water boots to get from his house to his vehicle and that his driveway’s concrete pyramids were under at least 12 inches of water.

Mr Dean, however, said that there should be gradual improvement in the weather over the next few days.

“We will start to see some improvements in rain patterns soon. On Monday there could be morning showers and another round in the afternoon, but by Tuesday things should start to level off. But in looking back at these weekend events it was a phenomenal amount of rainfall, especially considering the average rainfall for May averages around six inches normally.”

Mr Neely further remarked that The Bahamas stands a higher risk of more intense flooding incidents occurring in the future due to effects of climate change and a higher water table in New Providence.

“This does not bode well for the country with the higher water table and climate change flooding will become more frequent if not the norm. Flooding is getting more severe and we are going to feel the brunt of it,” Mr Neely said.

Mr Neely said the Meteorological Department could no longer be put on the backburner.

“Gone are the days of the government putting the Meteorological Department and the weather on the back burner. This is now a priority and the best the government can do is try to mitigate flooding in the country.”

When asked what the public can do in the face of increasing flood risks and the upcoming hurricane season, Mr Neely recommended that they prepare for both floods and hurricanes by renewing their insurance and ensuring that they have the necessary supplies in stock.

Dorian was 36" of rain in worst hit areas

The “classic” is the BPL sever weather warning ended at 9:45pm Friday night about half an hour before the “real” deluge started for remainder of the night, which was clearly shown on Weather Radar accessible by any smart phone accessing Internet!

It would be very ruff if a storm sits over us.

I pray Nassau never gets hit by a Dorian type hurricane with over 20ft of sustained storm surge lasting for days.

We cut down all the hills. East St, Gladstone Road, Collins Avenue. Its mindboggling that someone in power allowed it. I recall being driven home from school and wondering why they were destroying those beautiful hills. Used to watch Prospect Ridge and dream of how great it would be to walk through the brush like it was a real jungle...a few weeks ago I noticed the trees were thinning... what now??? When will we get it? When all the land running off into mud like Haiti?

East St is the MOST EGREGIOUS case, not only did that developer cut down ALL of the hill to build a shopping mall, they cut the hill right under private homes. IF you want destroy yourself take you, not other people

I am terrified this happens again during work hours, I would have been trapped at work.

This morning the flood was still there.

and to think that the son of the developer who cut down East Street hill now has his eyes set on the pristine hills in north Andros. Some people just needs to be stopped. We are wising up, we are not our grand parents.

It is what you get from 50 years lacking any real town planning. And no enforcement of what planning there was.

And PM Davis maintains that all of the well maintained and pre-cleared drains worked as expected, ensuring no excessive build up of water and flooding in low lying areas, not even the Pinecrest Subdivision. LMAO