It’s Mangrove Mania - in bid to save forests 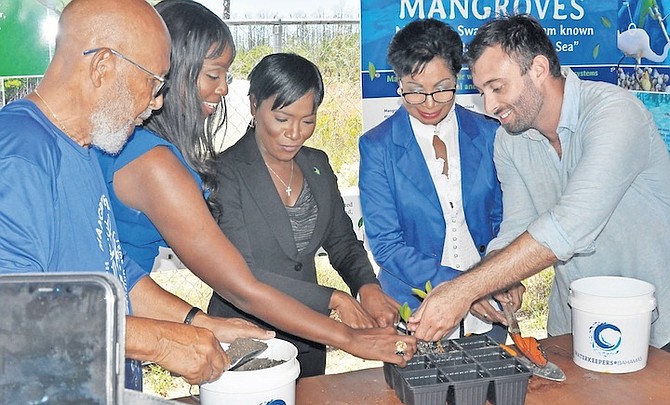 At Coral Vita, Mrs Davis met and spoke with youngsters who will be participating in the competition to grow and replant 30,000 mangrove propagules this year.

The initiative is spearheaded by Waterkeepers Bahamas and Earthcare Bahamas, along with partners, including Blue Action Lab and Coral Vita.

Mrs Davis stressed the mangroves are very important because it protects our shoreline.

“We had a lot of damage from previous hurricanes, but especially the last one, Hurricane Dorian,” she said.

The islands of Grand Bahama and Abaco were severely damaged and lost more than 70 and 40 percent of its mangroves.

Ms Moxey said this community initiative is timely and continues to raise awareness of the dire state of the island’s mangroves.

“This competition sends a clarion call for the community to unite with all-hands on deck to work to restore our mangroves to protect Grand Bahama against looming existential threats posed by climate change,” she said.

Minister Moxey said we must all do our part to contribute to the restoration and protection of our mangroves.

Rashema Ingraham, executive director of Waterkeepers Bahamas, said the initiative will be ongoing over several years with a target of planting 1m mangroves plants.

“This competition does not end this year our goal is to continue it,” she said.

She said an app has been created for mangrove mania that will assist competitors to reach their goal to collect, plant, and grow mangroves.

According to Ms Ingraham, groups could win a minimum cash prize of $2,000.

Sam Teicher - chief reef officer of Coral Vita who chose GB to build the first commercial coral farm – recalled the devastation of their farm and mangroves after the storm.

He said that they experienced a 17ft storm surge at the farm that swept some of their coral tanks 35 miles away east into the settlement of High Rock.

Mr Teicher said they also saw hundreds of yards of uprooted mangrove forest in the middle of the highway while travelling to East Grand Bahama during that time. He stressed that coral reefs and mangroves are important because they sustain fisheries and protect the coastline from storms.

Marine biologist Gain Woon, of Earthcare Bahamas, stated that citizen scientists were coined in 1989. She said that they have been planting mangroves with students for decades in West End, Queens Cove, and Dover Sound.

She urged people in the community to become citizen scientists and assist with the monumental task of the restoration of the decimated mangrove forest on Grand Bahama.

Rupert Hayward, founder of Blue Action Lab, said the Bahamas is entering a new chapter of evolution as it starts to build the green and blue economies.

“As we wake up to the realisation of climate change, and the opportunities that are becoming available to us as we grow these new sectors of our economy, if we don’t build capacity here in the Bahamas to take advantage of that, if we don’t build the workforce development to train Bahamians to understand the opportunities and have the skill-set required to fill the jobs to create the new businesses that tap into the blue and green economies, we will have failed,” he said.

Mr Hayward said the second step is to develop the blue carbon economy.