Candlelight vigil is held in memory of murdered sister 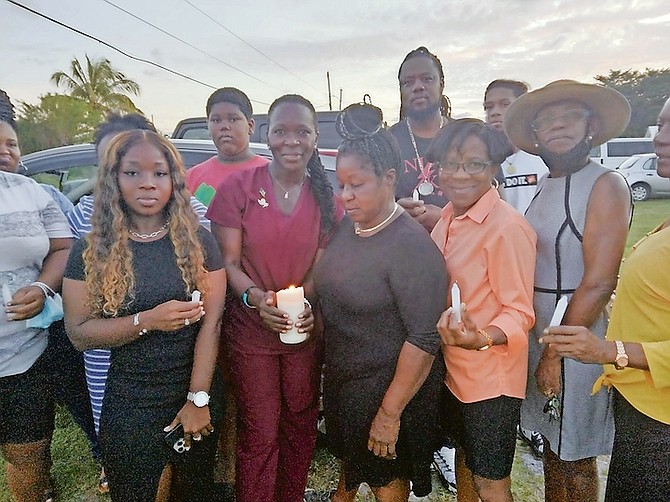 SHAVON Munnings (centre in black with candle) held a candlelight vigil on Tuesday in memory of her sister, Tiffany Smith, 30, a mother of four who was murdered 17 years ago by her husband. Ms Munnings, founder of Fallen Angels Candlelight Reach Out, has held the vigil annually for more than a decade to raise awareness of domestic violence. The vigil preceded a three-day Domestic Violence Awareness Conference at First Holiness Church grounds. Photo: Denise Maycock/Tribune Staff 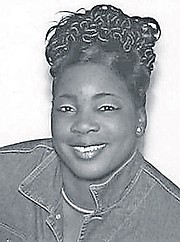 Ms Munnings, the founder of Fallen Angels Candlelight Reach-Out, lost her sister, Tiffany Smith, a mother of four who was murdered 17 years ago by her husband on May 24. Since then, she has vowed to raise awareness of domestic violence to help other victims.

A small gathering of people assembled at 7pm on the church grounds, with lit candles in memory of Ms Smith, who died at age 30. It was still very emotional for Ms Munnings as she recalled the day she got news of her sister’s death.

“Today (Tuesday) is the day that I lost my sister Tiffany, to the evil spirit we call domestic violence,” she said. “And I vow to continue to move forward with this (annual vigil) even though it hurts. It’s been 17 years, but I still feel like I just got the news.”

Ms Munnings said while the turn-out could have been better the important thing is to be able to reach someone.

“If we can just reach one woman, one person one year at a time, then I know her death is not in vain. I encourage women to first love themselves more,” she told the gathering.

Ms Munnings said Ms Smith was a happy person and was full of life.

“She gave a great testimony before she died. And I remembered her sitting on the bed that day dressed in all white. She had this smile on her face and she was happy and content that very day,” she recalled.

Ms Munnings believes her sister has found eternal peace. She said that she has been able to forgive her murderer.

“I saw my sister in my dream. And if she is happy in death, why walk around with this burden of hate and unforgiveness. I had no other choice but to forgive (him).”

The first day of the conference started on Wednesday evening with keynote remarks from Pastor Robert Lockhart, of Calvary Temple Assemblies of God Church.

Ms Munnings said that speakers would impart words of encouragement and empowerment to reach both victims and perpetrators.

Pastor Cedric Beckles will address the conference on Thursday, and Prophetess Rochelle Higgs will speak on Friday.