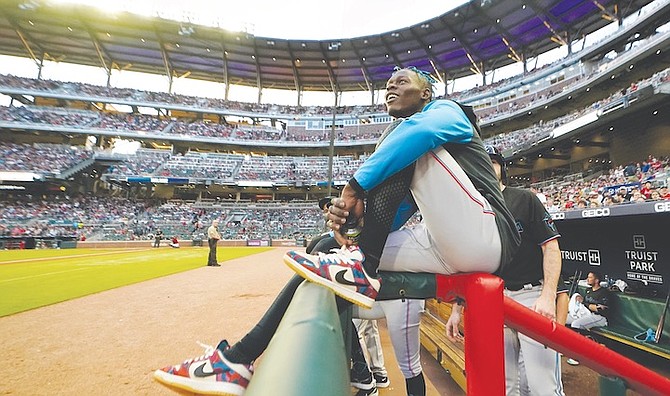 MIAMI Marlins second baseman Jazz Chisholm Jr watches from the dugout railing between innings of the team’s baseball game against Atlanta Braves on Friday, May 27, in Atlanta. Chisholm was not in the starting lineup. (AP Photo/John Bazemore)

JASRADO “Jazz” Chisholm Jr returned to the Miami Marlins lineup after being sidelined for a week with a hamstring injury.

Chisholm went hitless in his return and the Marlins’ offence outside of Jorge Soler struggled in a 6-3 loss to the Atlanta Braves in the series finale yesterday at Truist Park in Atlanta Georgia.

He missed four games with the injury and the Marlins went 1-4 in their last five to fall to 19-26 in the National League East.

He ranks second on the team with seven home runs and is third with 36 hits and seven doubles.

Chisholm was removed in the top of the third inning of the Marlins 4-3 win over the Braves on May 22 due to left hamstring tightness.

The injury is to the same leg that Chisholm had spiked by Atlanta’s Ozzie Albies in Saturday’s 4-3 loss, according to Christina De Nicola of MLB.com.

The Marlins travel to Colorado to open their three-game series against the Rockies at Coors Field. First pitch is set for 4:10pm local time.

Y'all make sure Jazz have a good pension fund for the shine he gives the Bahamas. He's alot of excitement but excitement brings high risk of injury and when athletes not in the spotlight Bahamians is forget.