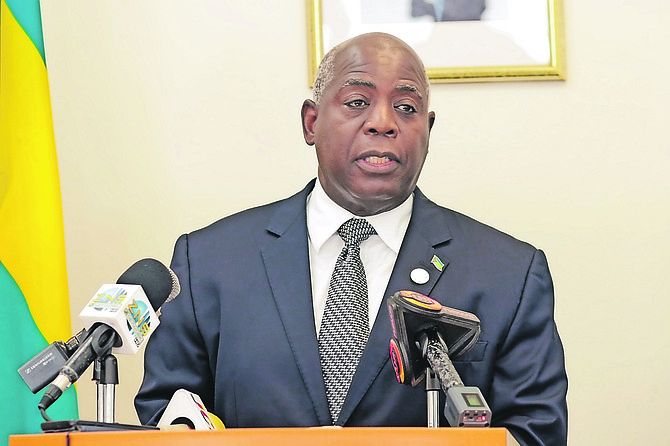 Prime Minister Philip “Brave” Davis said yesterday he is working with the United States on tracking firearms that enter into the country illegally but they still “need to do more”.

Speaking to reporters outside the Caribbean Commissioner’s of Police Conference, Mr Davis said that with collaboration with the US government, the Commissioner of Police and the Minister of National Security were able to track guns that were used in violent crime in the country back to “certain shops and manufacturers” and have even identified the people who have bought the guns.

Discussions have gone as high as the White House, Mr Davis said, but did not confirm which White House official he has been in contact with on the matter.

He said: “We are saying to the Americans they need to do more and to realise that we don’t want to get involved in their domestic issues about the right to bear arms. We are concerned that purchasers of guns are not just buying it to bear, but are buying to export and to traffic.”

The US has now appointed an Alcohol, Tobacco and Firearms (ATF) attaché at its Nassau Embassy to assist with identifying and tracing firearms and those responsible for trafficking them.

Mr Davis noted that the majority of the people trafficking arms into the country from the US have “Bahamian roots” and in many instances have “dual nationality” in terms of having some status in the US or are connected to The Bahamas in some way.

What is worrisome about tackling this heavy influx of firearms is that within the Caribbean it is estimated 70 percent of all murders are as a result of a firearm.

Mr Davis said: “More than 90 percent of guns confiscated and used as murder weapons in The Bahamas can be traced back to American manufacturers and gun shops. The production of small guns, ammunition and their components is illegal in The Bahamas. The stringent nature of The Bahamas’ gun possession laws creates a gap between statistics and reality. Despite the enormous burden of policing a country that forbids the manufacturing and possession of guns, the Royal Bahamas Police Force, has done much.”

This cruel short fat man can't stop illegal aliens from entering our country yet he somehow thinks he can stop illegal firearms from doing so. And the U.S. government would be better off sending that ATF officer recently assigned to the Nassau Embassy to Chicago.

WTF? Dumbo Davis never once mentioned the predominant prevalence of illegal firearms AND drugs that have been entering the Bahamas on sloops from Haiti for DECADES!!

Haitians are the number 1 threat to the national security of the Bahamas, however, the PLP and FNM signed secret agreements preventing them from protecting Bahamians and the Bahamas from the ongoing onslaught of the Haitian invasion.