ALICIA WALLACE: Speaking out with a strong voice on climate action

OVER the next few days, there will seem to be no end to the conversations about COP27.

COP is the Conference of Parties, the annual meeting and decision-making body under the United Nations Convention on Climate Change (UNFCCC). COP27 is the 2022 United Nations Climate Change Conference of Parties which brings together heads of state, civil society, and the private sector to discuss, plan, and commit to responses to the rapidly worsening climate crisis.

This year, COP is being held in Sharm El-Sheikh, Egypt. COP is generally composed of negotiations which take place between States, side events that are hosted by various bodies, including non-governmental organisations and companies, and exhibitions.

COP is a large conference with tens of thousands of attendees. COP26 in Glasgow was attended by over 30,000 people. Its five priorities, as outlined by COP26 president Alok Sharma, were adaptation and resilience, nature, energy transition, accelerating the move to zero-carbon road transport, and finance.

There was also a call for more attention to loss and damage, a theme that carried over from COP25 in Madrid.

The COP26 space was sprawling and challenging to navigate, and many terrible decisions were made with the obvious intention of blocking civil society from accessing certain spaces. It remains to be seen how COP27 will compare.

In addition to being difficult to navigate, COP26 was not particularly successful for many reasons. 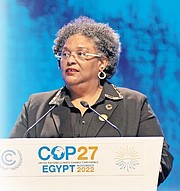 At COP21, the Paris Agreement – a legally-binding international treaty – was adopted, coming into force in November 2016. The goal of this agreement was to limit global warming to 2 degrees Celsius with a preference for staying below 1.5 degrees Celsius.

The chant has been “One point five to stay alive” for several years.

In order to keep this agreement, commitments must be made and actions taken to reduce greenhouse gas (GHG) emissions.

These plans detail how countries will reduce GHG emissions to slow climate change and as well as how they will adapt to climate change.

Importantly, the Paris Agreement addressed finance. Countries have large financial differences as well as difference in emissions that contribute to the climate crisis and difference in risk of being affected by climate disasters.

Considering this, the Paris Agreement identified “developed” countries as those that provide financing to more vulnerable countries. It took the same approach to technology and capacity building, calling on those with more to support those with less.

This year, “developing” countries are at COP to call for climate financing. Leaders of countries disproportionately affected by the climate crisis while contributing less than one per cent of global emissions have been highlighting the disparity, especially in recent years.

Heads of government from Antigua and Barbuda that have experienced the direct effects of the climate crisis have been calling for “developed” countries to take necessary action — reduce their own emissions and make financial contributions to help smaller, more vulnerable nations in their mitigation and adaptation efforts.

In September 2017, Hurricane Irma made landfall at 185mph and resulted in the death of a two-year-old child, the damage of 90 per cent of properties in Barbuda, and two-thirds of the people leaving for Antigua when Hurricane Jose threatened to follow the same path.

In the same month, Dominica saw over $90 billion in damage caused by category five Hurricane Maria.

In 2019, Grand Bahama and Abaco saw the devastation of Hurricane Dorian, and The Bahamas is still trying to recover. This month, more climate events are disturbing the Caribbean.

At COP, the Alliance of Small Island States (AOSIS) is an important body comprised, as the name suggests, of low-lying coastal and small island countries. Its 44 members include Antigua and Barbuda, The Bahamas, Barbados, Dominica, Dominican Republic, Fiji, Samoa, Vanuatu, and Mauritius.

Members of the coalition recognised their shared vulnerabilities and needs and they were the first to acknowledge the threat of climate change. They, of course, were and are also the first to experience the reality of the climate crisis. These are the “canaries in the coal mines”.

We have been fortunate to have the strong, clear voice of Prime Minister of Barbados Mia Mottley who has unwaveringly spoken with urgency for years.

At COP27, she said that this is the COP where action is needed, and there has been “horror and devastation” since COP26. She referenced the devastation in Belize caused by Tropical Storm Lisa and the severe flooding in St Lucia, all evidence that the climate crisis is here now, and not a threat.

She said: “We have the collective capacity to transform. We’re in the country that built pyramids. We know what it is to remove slavery from our civilisation. We know what it is to be able to find a vaccine within two years when a pandemic hits us. We know what it is to put a man on the moon[…] But the simple political will that is necessary, not just to come here and make promises, but to deliver on them, and to make a definable difference in the lives of the people who we have a responsibility to serve seems still not to be capable of being produced. I ask us how many more and how much more must happen.”

Mottley noted that her country has big ambition, but the ability to access what is necessary is constrained because the “Global South” is at the mercy of the “Global North”, and she used the example of getting electric cars in country.

She noted the difference in interest rates for borrowing for these countries, calling attention to the injustice.

“It is critical that we address the issue of loss and damage. The talk must come to an end. It can’t only be an issue of asking State Parties to do the right thing, although they must, but we believe that the non-state actors and the stakeholders, the oil and gas companies and those who facilitate them need to be brought into a special convocation between now and COP28. How do companies make $200 billion in profits in the last three months and not expect to contribute at least 10 cents in every dollar of profit to a loss and damage fund? This is what our people expect.”

Over the next few days, we will hear about the negotiations. We will find out who listened to Mottley and many others who spoke up for vulnerable countries.

We will hear a lot less about the hours long debates over one word here and two words there because certain countries want to limit their contributions, regardless of their culpability and the damage it causes others, but that is sure to happen.

As that takes place, there will be panel after panel of brilliant speakers who are experts in their fields and committed to climate action. Few government officials will bother to attend these events to increase their own knowledge and networks, but non-governmental organisations and activists will be there. They will listen, learn, share, and collaborate, and everything gained at COP27 will be taken forward and used over the next year to advocate for greater commitment which is necessary to keep us alive.

1 What My Bones Know by Stephanie Foo. In this memoir, Stephanie Foo shares her experiences of childhood abuse and trauma and her search for information on and healing for her mental health. She had been in therapy for years before her therapist finally offered to share her diagnosis with her. It was C-PTSD. While Post-Traumatic Stress Disorder may be caused by a single event, Complex Post-Traumatic Stress Disorder is caused by ongoing trauma. Foo looks back at her childhood and the way her family treated her, her behavior in school, the intervention and lack of intervention by adults around her, and her many years of different types of therapy, research, and understanding the connection between the brain and the body and their effects on one another. She recounts many incidents of abuse which can make it hard to read. Still, it is educational and it has sparks of hope as she finds her way.

2 She Begat This by Joan Morgan. “You might win some, but you just lost one.” “Everything is everything, what is meant to be will be.” “Now the joy of my world is in Zion.” If you started singing any of those lines, you may have been around in 1998 when The Miseducation of Lauryn Hill was released. You may even have an idea of the impact Lauryn Hill had on Black women, R&B, and hiphop. In She Begat This, Joan Morgan celebrates this album and what Lauryn Hill brought to the world through it.

Ms. Wallace, COPs have been an absolute failure. Here in The Bahamas, we have to become educated on this issue. We are not. And, neither are our leaders. Further, for others to take us seriously, we have to start doing the right thing ourselves. So long as our PM cannot say unequivocally to the oil drillers, "get out of The Bahamas for good and forever.", we are simply not serious. How can we move to step two when the first obvious one is so difficult to do? We are not serious. And, neither is our PM. Our PM is trying to decide if the big money will come first from the oil drillers, or from the countries that decide to donate to our cause. He is unable to see, it seems, that both represent the devil.