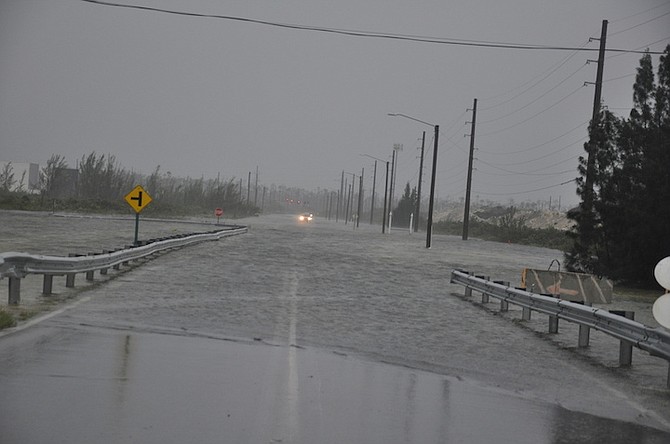 2.00am UPDATE: From the Department of Meteorology –

..NICOLE LIKELY TO MAKE LANDFALL ALONG THE EAST COAST OF FLORIDA WITHIN THE NEXT COUPLE OF HOURS…STRONG WINDS, DANGEROUS STORM SURGE AND HAZARDOUS MARINE CONDITIONS CONTINUING ACROSS THE NORTHWEST BAHAMAS...¬

A HURRICANE WARNING REMAINS IN EFFECT FOR THE ISLANDS OF GRAND BAHAMA, ABACO, AND THE BERRY ISLANDS.

A HURRICANE WARNING MEANS THAT HURRICANE CONDITIONS COULD BE EXPERIENCED IN THE ABOVE-MENTIONED ISLANDS WITHIN 36 HOURS.

A TROPICAL STORM WARNING REMAINS IN EFFECT FOR THE ISLAND OF BIMINI.

MAXIMUM SUSTAINED WINDS ARE NEAR 75 MPH WITH HIGHER GUSTS. LITTLE CHANGE IN STRENGTH IS EXPECTED UNTIL NICOLE MAKES LANDFALL ALONG THE FLORIDA EAST COAST. NICOLE IS EXPECTED TO WEAKEN WHILE MOVING ACROSS FLORIDA AND IS LIKELY TO BECOME A POST-TROPICAL CYCLONE BY FRIDAY AFTERNOON.

STORM SURGE INUNDATION, AS MUCH AS 4 TO 6 FEET ABOVE NORMAL TIDE, IS IMPACTING THE COASTAL SHORES OF THE ISLANDS IN THE NORTHWEST BAHAMAS. THEREFORE, RESIDENTS IN THESE ISLANDS SHOULD AVOID THE COASTAL AREAS AND MOVE FURTHER INLAND.

LARGE SWELLS GENERATED BY NICOLE WILL AFFECT THE NORTHWEST BAHAMAS FOR THE NEXT SEVERAL DAYS. THESE SWELLS ARE LIKELY TO CAUSE LIFE-THREATENING SURF AND DANGEROUS RIP CURRENTS.

NICOLE IS EXPECTED TO PRODUCE RAINFALL AMOUNTS OF 3 TO 5 INCHES WITH LOCALIZED HIGHER AMOUNTS OF UP TO 8 INCHES ACROSS THE NORTHWEST BAHAMAS TODAY THROUGH FRIDAY.

THE FORMATION OF WATERSPOUTS AND TORNADOES IS POSSIBLE IN TRAILING RAINBANDS AS NICOLE PULLS FURTHER AWAY FROM THE BAHAMAS. BOATERS ARE ADVISED TO REMAIN IN PORT.

RESIDENTS, IN THE NORTHWEST BAHAMAS ARE ADVISED TO REMAIN INDOORS WHEN WEATHER CONDITIONS DETERIORATE. HURRICANE AND TROPICAL STORM CONDITIONS WILL LESSEN ACROSS THE ISLANDS OF GRAND BAHAMA, ABACO AND THE BERRY ISLANDS TODAY AS NICOLE MOVES AWAY FROM THE BAHAMAS.

“In the islands of Grand Bahama, Abaco, Berry Islands and Bimini, NEMA will make an announcement in due course but these areas continue to be under warnings.”

11.00pm UPDATE: In its update earlier this evening, the Bahamas Department of Meteorology said Nicole has become a hurricane and continues to bring dangerous storm surge and strong winds to the extreme Northwest Bahamas. (See document left)

8.15pm UPDATE: The Cabinet Office is advising the general public that the National Emergency Management Agency (NEMA) has given the "all clear" for the islands of New Providence, Eleuthera and Andros. All Government Offices in these islands will open on Thursday, 10th November, 2022.

Government offices in Grand Bahama, Abaco, Bimini, and Berry Islands will remain closed until NEMA gives the "all clear" for those islands. 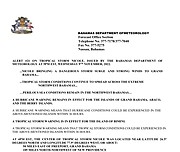 6.30pm UPDATE: More videos showing the effects of Nicole in Freeport and Nassau.

The scene at the Western Esplanade – Video from Storm Intercept Network.

An update at noon said there were reports of downed power lines and settling of water and fallen trees in East Grand Bahama. Residents have been urged to stay indoors as conditions are not safe.

Due to high winds, gusts and rain, staff of Bahamas Power and Light (BPL) and the Grand Bahama Power Company will commence work once the “all clear” has been given.

The Grand Bahama Power Company issued a notice early Wednesday, November 9, advising the public that they are aware of the outages; they will not schedule a “control shutdown” of their system.

The water supply in Grand Bahama and Abaco has been affected due to the power outages in Abaco, and Grand Bahama.

The Grand Bahama Utility Company advised customers that faults at some of their wellfields caused by debris from strong winds also caused loss of power. They are therefore running on backup generator and will provide water for as long as they can safely do so.

Tropical Storm Nicole is expected to strengthen to a Category 1 hurricane upon landfall or shortly after.

Officials continue to advise residents to stay indoors until the all clear is given sometime on Thursday. 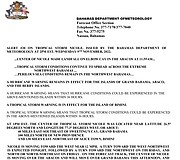 3.05pm UPDATE: From the Bahamas Department of Meteorology: The centre of Nicole made landfall on Elbow Cay in the Abacos at 11:55am . . . tropical storm conditions continue to spread across the extreme Northwest Bahamas. (See document left) 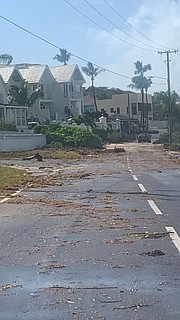 2.30pm UPDATE: Officials of the Royal Bahamas Police Force and the Ministry of Works and Utilities have announced that road closures have taken place with immediate effect in the following areas due to damage from rough seas associated with Tropical Storm Nicole:

The Sandyport entrance to Blake Road.

Arawak Cay to the Western Esplanade.

Police Officials and Damage Assessment and Road Assessment Teams from the Ministry of Works and Utilities will continue to assess and monitor the situation.

The National Emergency Management Agency joins the Royal Bahamas Police Force in advising persons to remain at home until advised otherwise by the relevant authorities. (BIS Photo/Ministry of Works)

10.40am UPDATE: Bahamas Power and Light has given an update on outages in New Providence:

Bahamas Power and Light Company Ltd. (BPL) advises customers that we are aware of and closely monitoring outages in the following areas:

These areas are experiencing interruptions in power supply due to severe weather conditions impacting our infrastructure (including Broken Poles and Downed lines).

As the safety of our customers, employees and equipment is of paramount concern, these areas will be attended to as soon as the respective safety risks in each area are no longer present.

Customers are reminded to stay safe during this time. Updates to follow.

10.10am UPDATE: Video showing conditions in Abaco this morning. 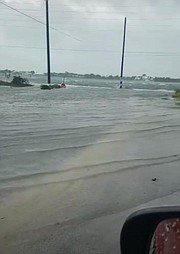 A photo of flooding in Marsh Harbour, Abaco on Wednesday morning. 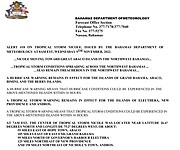 AS conditions began to deteriorate in Abaco due to Tropical Storm Nicole’s approach, government officials continued to urge vulnerable residents in the storm’s path to seek safer ground – as some have failed to evacuate areas considered unsafe.

This comes as some 500 residents in Cooper’s Town, Abaco were said to be cut off due to the main road being flooded. However officials said those residents could still access basic facilities in the immediate area.

Director of the National Emergency Management Agency Captain Stephen Russell said Tuesday during a press briefing that 70 percent of the people who occupied trailers in Abaco evacuated.

“I also mentioned that some 100 or more mobile trailers were being occupied by government employees and others in the Marsh Harbour, Abaco (area). And from the report I got from the executive chairman from the DRA this morning (yesterday) I think. . .70 percent of the persons adhered to the warning and they are now seeking alternative location,” Captain Russell said.

Evacuation efforts on the islands of Abaco and Grand Bahama have been ongoing. Captain Russell confirmed that 36 of 46 residents had been evacuated out of Sweeting's Cay, Grand Bahama.

He added that 25 workers on Guana Cay who lived in trailers were evacuated as well.

On Tuesday, Tropical Storm Nicole was heading west with 60 mph winds, on a projected path to impact the northwest Bahamas, according to Captain Russell. He said Nicole was now at the “warning” stage, noting that communities could be impacted within 36 hours.

“We are hearing about flooding in certain areas, in the Cooper’s Town area. I’m advised by Mr Greene that the tide won’t crest for another three hours. So those areas probably are going to get worse,” he said.

Mr Laroda said due to the deteriorated conditions, the Glass Window Bridge in Eleuthera was closed.

He urged residents to take the necessary precautions to prepare for Nicole. He appealed to people who live in low lying or considered “vulnerable areas” to seek safer ground.

Regarding Cooper’s Town, one reporter asked about a road blockage which was being caused in that area because of the flooding.

An official at the NEMA press conference responded that more than 500 residents in that area of Abaco were currently affected by the road blockage. However, the official said those residents still would have access to the facilities such as the clinic, shelters, and assistance of the police officers that reside in the community's area.

The official explained that those 500 residents were not “trapped” because of the road blockage.

“In many of our islands we have areas that because of topography, you have where they are prone to flooding. Once those areas are flooded, we have (places) where transportation cannot rarely cross,” the official said.

In those instances, the official said they had heavy duty equipment that would collect those residents in the area that was cut off.

The official noted he did not know if that action had been activated as yet.

Tropical Storm Nicole is expected to intensify by Wednesday morning as it crosses the North Abaco area, according to Chief Meteorological Officer Geoffrey Greene.

Nicole is expected to become a category one hurricane on Wednesday.

Residents in Abaco and Grand Bahama on Monday began preparing for the worst, stocking up on emergency supplies as the anticipation of Tropical Storm Nicole brought up the horrors of Hurricane Dorian, which brought devastation to both islands in 2019.

How near was Sam Bankman-Fried’s FTX to brink of collapse after crossing into storm's path of a surge in customer withdrawals sparked a liquidity crisis.― Yes?

"areas in the northern Bahamas are already experiencing power outages"

yup for about 4 months now

Yes. The storm of incompetence, corruption, and fiscal irresponsibility came ashore some time ago. Before many of us were born, it seems, and shows no sign of letting up.

So the storm that was hyped up as an approaching doomsday turned out to be exactly what it said it was all along, a tropical storm with winds under 80mph, 3-5" of rain, no threat of catastrophic damage and some storm surge intrusion that happens with every storm.

I'd really like to hear an assessment from NEMA, not saying it was better to be safe than sorry, but assessing whether the response overestimated the threat. We cannot keep doing this. It is wasteful and bad emergency management.

Just because some people have legitimate Dorian PTSD fears, we can't enable them by saying prepare for the worst! at every storm. When it's as clear as day this was nowhere near the worst. The messaging should have been from the start: we understand your fears, be cautious, lack of awareness and respect for nature can cause harm, but this is not Dorian. Based on the storm data these are the effects we anticipate, if that changes we will brief you immediately.

And no, this is not because I live on Nassau, it's because I read the storm warnings minus the NEMA messaging. Did the same for Fiona. If the warnings say the storm is 150 miles away, and that's the closest it will come to you, extends out from the center 200 miles. With outer bands having 40mph. It dont matter how strong winds at the center are, you're getting max 40mph winds.

I do think we should all be prepared generally for a tsunami, that has no warning, based on where you are what will you do? Being able to swim is a good practical prep start

Can a reporter please ask NEMA what the benchmarks are for an evacuation exercise and where are the storm surge graphics used to justify evacuation. Not that it wasnt necessary but how did they use data to arrive at the decision

Bahamians just love drama .......... from the PM on right down to the chirren

That is my take on it, that this was made more than it was for the PR. I listened to the DPM after his inspection basically say nothing much to see.

You expect the salt water damage within maybe 40ft of the coast, that's inescapable. The roads bridges piers beach infrastructure cant run. He also added we faired better than expected... well if you expected a Cat-3 or greater ignoring the data, then yes