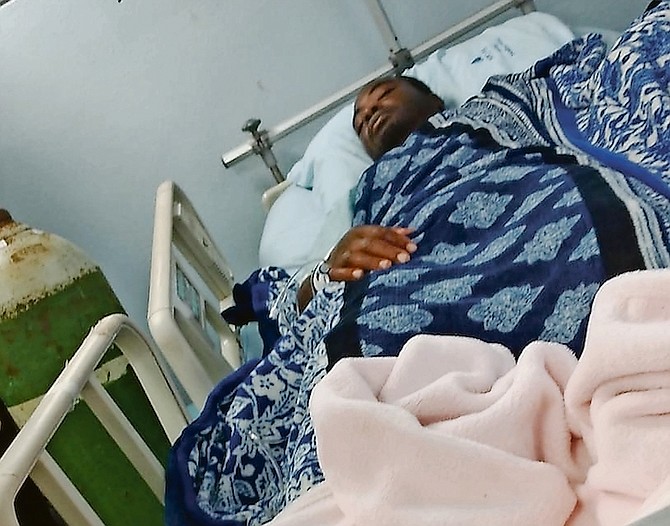 NAVADO Sweeting in his hospital bed.

AN Andros man is breathing a sigh of relief after having survived a brutal shark attack on the island over the weekend.

Navado Sweeting, 32, was bitten on his left hand by a bull shark while spearfishing with his brother and nephew on Saturday.

According to relatives, the Andros resident, who spears fish for a living, had to break his hand in order to free himself from the shark’s biting grip.

His youngest brother dove “in a pool of blood” to help save him following the attack, this newspaper was told.

Speaking to The Tribune from his hospital bed yesterday, Mr Sweeting recalled the terrifying ordeal.

“But the shark ended up grabbing hold of my hand and started shaking and that’s when my brother pulled me back up to safety and called for the boat to come for us and so my brother was actually the one who saved me, but I was actually trying to save him from getting attacked by the shark.”

He added: “I had to break my hand because he was pulling me back down and he was trying to drown me.”

Mr Sweeting said he probably would have died if he did not resort to such tactics.

Before this newspaper’s interview with Mr Sweeting yesterday, The Tribune contacted relatives who were still a bit shaken from the incident.

They said the ordeal brought back painful memories for them because it was similar to the shark attack his father experienced in the 1980s when he lost his left hand in the incident.

“Whom God keeps is well kept...It’s taking a toll, but you have to try to hold up yourself,” his grandmother, Monica Sweeting, said.

Meanwhile, Phillip J Sweeting, the victim’s father, said he never expected that his son would endure a similar ordeal to what he experienced.

However, he said the family is still thankful because his son was able to save his life and also his hand which remains intact.

“It gets emotional when I keep on talking, but my son keeps encouraging me not to cry,” Mr Sweeting said. “And people say that’s the same left hand (he got bit in) like you and … I didn’t expect it because they told me last week that it does be a lot of sharks coming in over there because those boats keep dropping this garbage in the water and you know like that.

“So, it’s a deep-water area and the sharks them would frequent that area and I always telling them be careful and I usually WhatsApp a lot of my people every morning and I encourage them, and I always tell my sons, ‘y’all don’t know when you’re going to die so put God first.’

“That incident happened to me in 1982 and I never give up and I just told them from the hospital that I’m going to live my life to the fullest and from then I was working and carrying on.”

Family members said the road to recovery will not be easy for the 32-year-old as he will have to receive therapy for several months.

To help with his medical expenses, they are appealing for donations.

But only hunt for sharks that are known to have bitten someone or has been researching 'how to attack a human and get away with it'.

Bonefishpete... HUH???? This might be the dumbest response/comment I've read so far for 2022. The guy was SPEARFISHING!!!! Every spearfisherman should know... if you spear a fish (and especially if you are spearfishing multiple fish in an area), you are at a very, very high risk of attracting sharks. It doesn't take someone with much of a functioning brain to realize that!!

Have a big TV show and let Bahamians make some money off these excess sharks.

Please do your research. Perhaps you were kidding, but the shark population in collapsing globally. Just like conch populations. But, sometimes if you see them locally abundant and have no desire or ability to study the science, one might think that their little corner of the world is just like ours. It ain't. We are merely irresponsible due to willful ignorance.