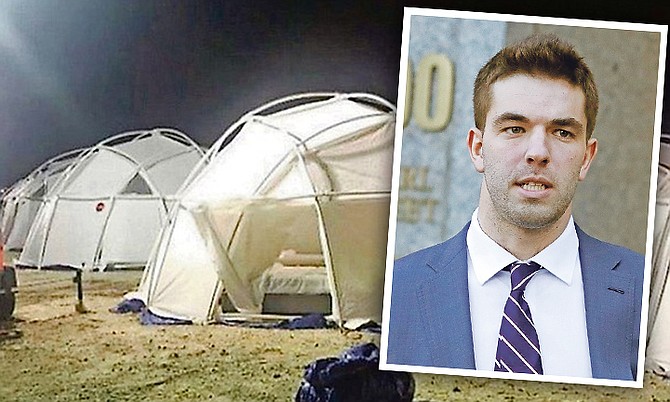 TENTS at the Fyre Festival site in 2017 and (inset) Billy McFarland pictured in 2018.

FYRE Festival organiser Billy McFarland reportedly has sent a letter to the Bahamas government in which he “profusely apologises” for the disastrous event, claiming he wants to make things right with The Bahamas.

Mr McFarland admitted he was “completely wrong” and said he regrets his actions.

The apparent attempt to make amends comes after Deputy Prime Minister and Exuma MP Chester Cooper said the government will not endorse or approve any event in The Bahamas associated with the convicted felon, whom he dubbed a “fugitive”.

Billboard revealed yesterday that Mr McFarland’s representatives gave the publication a copy of the letter claimed to have been sent to the government in response to the minister.

The letter read: “I am writing to you to profusely apologise for my actions five years ago. I was completely wrong and I wholly regret my actions. I’ve now served my punishment in prison and now that I am out, my main focus is how I can right my wrongs and how I can make The Bahamas and Family Islands, a region I care so deeply about, whole again.

“Over the years, and particularly since my release on August 30, I have been in constant touch with the people throughout the islands. Their generosity and kind hearts have been a constant guide and motivation for me. I have been re-engaging with the families of the islands to see what I can do to begin making amends.

“I don’t have much right now, but I am committed to make these families whole as soon as I am allowed. I ask for guidance on whom to speak with to begin my journey to do right by the incredible people of The Bahamas and Family Islands. I truly acknowledge the hurt I caused to the people, and region, and I will spend the rest of my life working to right my wrongs,” Mr McFarland wrote.

Several international media outlets recently reported that Mr McFarland has a new venture, with plans of returning to the country to host a “treasure hunt” that will be the focus of an upcoming documentary. He also had been teasing the hunt on TikTok.

According to MixMag, Mr McFarland is heading back to Exuma, the original site for the failed 2017 Fyre Festival, to launch “PYRT” which will “see participants take part in a treasure hunt where they track down bottles containing messages”.

Mr Cooper released a statement on Monday explaining no application has been made to the government for consideration of any event promoted by Mr McFarland or any entity or parties known to be associated with him.

The minister also said Mr McFarland is considered to be a “fugitive” due to several pending complaints made against him with the Royal Bahamas Police Force (RBPF).

The Tribune spoke to Elvis Rolle on Sunday as his business Exuma Point Beach Bar and Grill did catering for the failed festival. He said he has not been paid as yet and is owed money by festival organisers. He is one of many people on Exuma who claimed that they were shafted by Mr McFarland.

While Mr McFarland alleges in his letter that he has been in touch with the people throughout the islands, Mr Rolle said: “From the time they left the country, I haven’t heard nothing from them.”

Meanwhile, in reaction to the apology, Mr Cooper told reporters yesterday: “As I’ve laid out yesterday (Monday) in my press statement, I believe there are several complaints with the Royal Bahamas Police Force. I think he should have a conversation with them.”

Asked if the government would reconsider its position if Mr McFarland presents funds owed to persons in Exuma, Mr Cooper indicated that this is a police matter.

If he is a fugitive like they say if he lands here he should be arrested. I'm sorry, seeing as the man committed the crimes in this country he should have served a sentence here first.

If the people decide that they will not pursue charges if he pays them that is on them. However, idk how a mass fraudulence can happen here and we don't hold the person responsible here.

He definitely needs to be arrested the minute he lands in the Bahamas!!!!

He and the FTX guy seem to be on the same page...both apologizing, pretending to be humble....both promising to make amends to the Bahamian people....both trying to suck up to the government to be allowed to continue their dirty work. Will they be allowed to bulldoze their way past out government officials by appealing to their super egos and giving more shingles?

If being a fugitive should warrant an arrest, he should be arrested as soon as he tries to land. Actually, he should be on a government Stop List.

If he is a fugitive then we should ask for extradition from the US. We send many Bahamians to the US for breaking their law, so it should be reciprocated.

According to The Colony's Street Corners' Best Talkin' Policemans'-minded Gossipers.

Just because of past confirmed crimes committed on and orchestrated from The Colony's soil --- 'if was by a foreigner on an Bahamas Out Island.

In The Colony, unlike the locals whose asses get hauled into the back of the policemans' vehicle, ---- foreigners' and House seated MPs, residents of Gated Communities and once-upon-a-time Billionaires,'' are politely invited to grant consent to a policemans' sit-down interview.

This pirate will be back here in short order!

Do like the Americans do: roll out the red carpet for him and give him a special invitation and warm welcome. Then roll him straight to Fox Hill and make him wushu he had a tent to sleep in or even homemade sandwiches.