‘No one cares about the women’ on national basketball team

THE Bahamas Basketball Federation has pulled the plug on the women’s national basketball team’s trip to Mexico for the Centrobasket tournament. The team qualified to compete in the tournament after picking up the bronze medal in Cuba with a 68-57 decision over Jamaica at the FIBA Caribbean Women’s Basketball Championships in July. The event is set for November 20-27.

AFTER all of the sacrifices made and the hard work that they put in, head coach Donillo ‘Donnie’ Culmer said he’s disappointed that the Bahamas Basketball Federation pulled the plug on their trip to Mexico for the Centrobasket tournament.

The team qualified to compete in the tournament from November 20-27 after picking up the bronze medal in Cuba with a 68-57 decision over Jamaica at the FIBA Caribbean Women’s Basketball Championships in July.

But according to Eugene Horton, president of the BBF, the team had to skip the trip because of a lack of funding.

Horton said the federation had exhausted its funding getting the men’s national team through the rounds of the FIBA Americas World Cup Qualifier.

Culmer, who took over from Yolett McPhee- McCuin, who went on to assist the men’s national basketball team, said it’s very disappointing that the team can’t travel. He said he and assistant coaches Deven ‘DD’ Johnson and Anastacia Sands had prepared the team for Mexico.

“Those young ladies put in the work. Some of them went back to college after Cuba, but the others took a couple of days off and they were back in the gym,” he said. “We brought in a personal trainer and a lot of them lost weight and got quicker.

“They put in the work with practice for at least six days a week. To come down to this where we can’t travel because of a lack of funds, it’s disappointing. The men are always travelling. They wanted the coaching staff to seek the financial assistance, but I think that was too much for us. That isn’t the coaches’ job.” 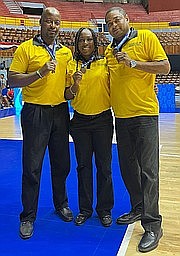 Culmer said once again the federation and the Ministry of Youth, Sports and Culture dropped the ball and missed the shot for the women’s team to travel.

He’s confident that the women had a better chance to advance than the men. “We went to Cuba in June- July. They had ample time. They knew this trip was coming,” Culmer said. “The minute we won that bronze, they knew that the next trip was coming in November. Everybody who was following sports dropped the ball on the women’s team.

The Bahamas would have played against Mexico, Costa Rica, Puerto Rico, Cuba, Dominican Republic and Guatemala.

“We had some veteran guards who came out. I even got one member of our coaching staff to get back on the court to help out and she was willing to do that,” Culmer said. “So it hurts that we won’t be able to travel.”

Diasti Delancy had turned in her coaching outfit to return to the court to play as she joined the team that would have been led by centre Britinique Harrison. Culmer, however, said it’s going to be hard to convince the players to try out for the team in the future.

“This is going to set the women’s programme further back,” Culmer said. “We will continue to see if we can get a gym. We haven’t practiced for about two weeks after they closed the gym to get ready for the men’s games this weekend.

“We want to try to see if we can get in a few games either in Jamaica or the USA, just so that all of their work won’t go in vain. It’s hard because these ladies are disheartened.

“The men travelled up and down and the women can’t get in this one last tournament?”

Culmer said while they did make some inquiries to potential sponsors, they were informed that they had already made a contribution to basketball.

He wanted to know if the funding received would have gone directly to assist the men’s team, much to the detriment of the women’s programme. “No one cares about the women. It’s going to hurt because this would have been a good opportunity for us to establish a programme for the young players we have coming up,”

Horton, however, said it was not for a lack of trying and he converged it to Culmer every time they spoke.

“It would have cost us about $25,000 to send the women’s team off,” Horton said. “At the time, FIBA gave us a deadline to commit. We didn’t commit because we didn’t have the funds. I got some people to assist, but when we contacted FIBA, they told us it was too late. “As for the men’s team, we were committed to play and if we didn’t, we would have received a hefty fine and a ban for at least seven years for all national teams, so we had to continue playing in the tournament.”

Although the men’s team lost to Argentina 80-76 on Sunday after they won 83-79 over Panama on Friday, they still have one more round to play in February when they travel on the road to play Venezuela and Panama.

The Bahamas team, coached by Moses Johnson and John-Marc Nutt, lost to Argentina, however, it quashed any chance of the Bahamas playing past the remaining two games to complete this window of the qualifying round.

The Bahamas is fifth in Group E at 3-7, with the sixth and final window left to play in February 2023. Canada leads the group at 10-0 and has already qualified for the World Cup.

Venezuela, The Dominican Republic and Argentina are all tied at 7-3 while Panama is sixth at 2-8.

At the end of the second round, the top three teams in each group plus the best fourth place finisher among the groups will qualify for the World Cup.