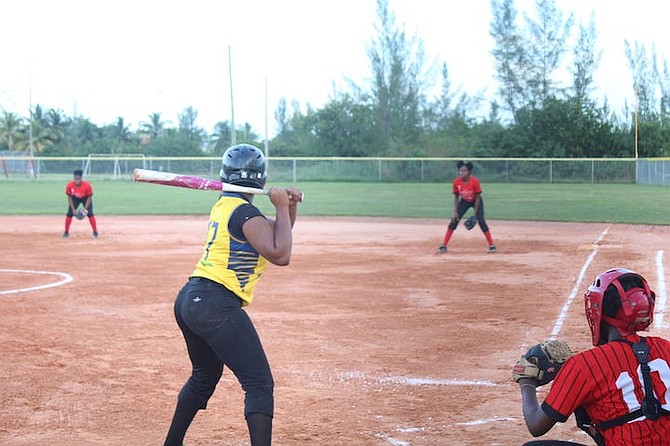 Game two in all series will continue today at the Baillou Hills Sporting Complex.

In the much anticipated pitcher’s duel, Ladanian McKenzie got the win after Iverson Laguerre scored the only run of the game in the fourth inning.

McKenzie, holding on for the win, had nine strikeouts, the same as losing pitcher Kendal Brown.

“I’m satisfied with how they played,” said RM Bailey’s coach Clifton Carey. “We got the pitching match-up that we expected, but we were better prepared for this game than they were.”

Carey, however, said he knows that it will not be a walk in the park as they go for the sweep today and he indicated that he expects to have his team firing on all cylinders.

In the continuation of their perfect season, the Mystic Marlins didn’t hold anything back as they slaughtered the Knights, producing a pair of eight runs in the first and second innings. CR Walker could only muster two runs in the first inning. Grace Chea, who provided some of the offensive spark, was the winning pitcher.

Vanessa Sawyer was tagged with the loss. “They did very well. In the past few weeks, our batting was a little shaky, but we worked on that and they came out and batted very well today (yesterday),” said Zania Kemp, the head coach of CV Bethel. “I expect us to continue that intensity in game two. We’re looking to bring home another win. We have the potential to win. We just have to go out there and do it.”

After pulling off a 5-1 victory in the earlier game to complete the playoffs, the SC McPherson Sharks didn’t have any steam left to face the undefeated AF Adderley Fighting Tigers in game one, scoring two runs in the first, one in the third and five more in the fourth.

Mario Dean got the win in relief for Justin Colebrooke. Michael Lopez suffered the loss.

“I feel pretty good. I’m satisfied with how we played. We had good pitching. Our first pitcher went about couple innings and then we brought in our next pitcher and he kept up the intensity,” said Fighting Tigers’ coach Vincent Sullivan. “We have to come back for game two. Our mission is not complete. We have to finish it off.”

Sullivan said they will come out with the same intensity and hopefully that will enable them to secure another win. But he cautioned his players, reminding them that they have to play in order to win because SC McPherson won’t just give it to them..

The Golden Eagles survived the completion of their playoff game earlier in the day with a 6-4 decision over the CH Reeves Raptors. But they were simply no match for the Lions in game one of the final.

Jermiah Frazer came through with another big performance on the mound for the win, while Brianna Knowles was tagged with the loss. “We played very well today,” said catcher Jada Frazer. “I didn’t expect my hit because I was getting walked, so when I got the inside of the parker, I was very happy.”

She said they are confident that they will take game two today.