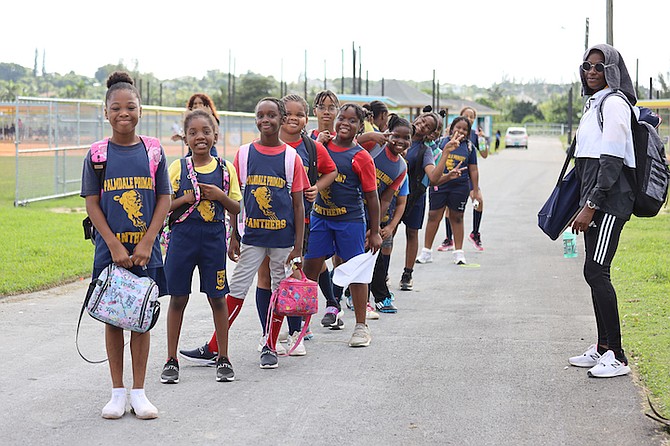 GARVIN Tynes and Palmdale Primary have booked their tickets to the girls’ softball championship game for the New Providence Public Primary School Sports Association as they wrapped up the preliminary rounds yesterday at the Baillou Hills Sporting Complex.

While the two teams are set to square off against each other on Friday, the boys will determine today who will advance to play in their baseball championship that will be played on the same day and venue.

TG Glover had a chance to knock out either one of the teams in the girls’ division when they played the final game of the elimination process, but they needed to score at least 14 or more runs.

In the one hour played where they used a system where after you score five runs in one inning, the next team switches on offence, they only completed two innings and ended up with a 10-3 win over Sandilands Primary. And In other games played yesterday, Eva Hilton knocked off TG Glover 7-2, Garvin Tynes nipped Eva Hilton 8-7 and Palmdale got by Carlton E Francis.

Association president Latoya Bain-Sturrup said it’s a great start to what they are anticipating to be a great week of softball and baseball.

“The kids are having fun and they are getting into the development of the sport. That is what it’s all about,” she said. “They are having a lot of fun with the softball, even though some of the teams were disappointed that they didn’t get to the finals.”

Crystal Eneas, who along with Janice Williams coach Garvin Tynes, said their girls are happy to be in the “big dance” and they are eager to “show their skills” when they face Palmdale, coached by Ashley Oembler. “I think the children did a great job, considering that we are only working on the fundamentals,” she said. “We are at the elementary stage so it’s imperative that we prepare them for junior high school and beyond.”

Oembler was just as thrilled about the performance of her Palmdale team and is looking forward to the matchup against Garvin Tynes.

“Our team is doing an exceptional job, as the majority of the girls on the team are learning how to play softball for the first time,” Oembler said.

“From the time we got started and going into the championship, they have improved tremendously.

“We hope to execute well and perform to the best of our abilities and come out with the win.

“We have much more to improve on, but it is a learning experience for all of the girls.”

As the public relations officer for the NPPPSSA, Eneas said having played soccer already this year, they are looking forward to the completion of softball/ baseball before they head into basketball and eventually track and field.

“We are just excited to get back to our regular competition,” Eneas said.

Today, the boys will begin competition in baseball. “These teams are very competitive, so I would advise persons to come on out if they are not working to come out and cheer the kids on,” she stated.

Also on hand to view the games was Sheniqua Curry, the principal at TG Glover and president of the Primary Principals Association for the past five years, said it’s exciting to see sports being played in the primary schools again.

“We have been locked down for so long and to see the children now engaged in outdoor sports is just exciting,” Curry said.

Curry, however, was hoping her TG Glover team, coached by Brad Wood Jr and William McFall, would have scored the 14 runs they needed to get into the finals, but nonetheless, she was pleased with the team’s effort. “It’s been a long time since the kids have been exposed to the fundamentals of the sport, but in the time frame they had to work with them, I think they did a good job,” she said. “I think all of the schools should be commended for getting their kids ready to play in the tournament.”

John Rolle, one of the top softball/baseball players in the past, was also in attendance to support the tournament, especially TG Glover where his granddaughter is playing on the team. He said this is where it all gets started for the future players to play the game. “On behalf of the parents who are here to support their kids during their working hours, I think it’s great,” he said.

“I know I miss playing. At my age, I can just sit back and watch my grandkids play. I know I had some great days playing and I hope that they will enjoy it just as much as I did.”

Chief umpire Martin ‘Pork’ Burrows and a crew of umpires officiated the games.