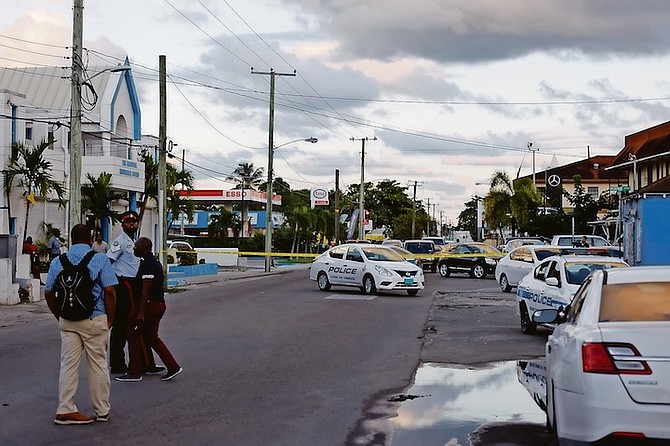 POLICE at the scene of the shooting last night. Photo: Austin Fernander

AN off-duty police officer was shot while trying to thwart an armed robbery at a food store, police said.

Chief Supt Michael Johnson, officer-in-charge of the Criminal Investigations Department, said police got a call after 5pm regarding the shooting at the food store in the area of Mount Royal Avenue and Wulff Road. Police found the victim, an off-duty police officer, with gunshot wounds to his upper body.

“The information is he was at the mentioned store when we believe that two males attempted to rob the particular establishment,” CSP Johnson said at the scene. “He intervened, one of the males produced a firearm and shot him to the upper body.”

The victim was taken from the scene by ambulance in stable condition. His present condition was unknown up to press time.

Shortly after the incident, police went into Bain Town acting on information and arrested one suspect and recovered a firearm, CSP Johnson said. That suspect is assisting police with their investigation.

CSP Johnson thanked the public for the information which helped lead to the suspect’s arrest.

That poor police officer could just as easily have been stabbed in the chest by his assailant. Illegal firearms are only part of the problem. Growing severe poverty breeds uncontrollable violence of the worst possible kind. I wouldn't work at the cash register of any store in New Providence today. Jobs involving the handling of cash are very prone to come with shortened life.

And the police are too busy taking licensed firearms away from decent folks who know how to securely store and use them when needed while letting the illegal gun trade in our country go virtually unchecked. In fact, cruel Davis has saddled us with a useless police commissioner, Fernander.

Only every blue moon will the police conduct search operations for illegal firearms and then put the relatively few they find on public display for a meaningless crime fighting photo op. It is very much like our problem with illegal aliens who have 'over-run' our country's limited resources. Only every now and again in response to a public outcry are some of them rounded up and sent back to their home country on a plane.

Our real problem is decades of culturally ingrained pervasive government corruption from the very top right on down through the more senior ranks of the civil workforce.

Damn, how'd the off duty cop let them get the drop on him? Should have shot and killed one immediately then you'd only have to focus on one. Probably hesitated to take them both in alive when killing that scum is doing society a favor.

The way politicians are making things, expect plenty more of this. It is to bad it’s not the politicians going out and dealing with the mess they make its the police who have nothing to do with their risky political decisions.