King and Bluejays look ahead to new season 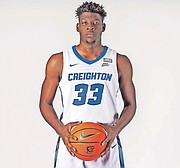 Head coach Greg McDermott said King and the incoming class of fellow freshmen and transfers bolster the depth of a roster many pundits expect to be one of the most talented in all of NCAA Division I basketball.

“No question. I’m really excited about that,” McDermott said of the team’s depth following the first official day of practice ahead of the upcoming season. “We’ve got some new pieces so we have to get those new pieces accustomed ot the way that we are going to play. We want to get back to playing a little bit faster. Last year because of the injuries we were really forced to slow things down and control things a little bit more because we didn’t have any depth. But I think we can get back to playing the way we did before which was a little bit more quicker and a little bit free flowing.”

The Bluejays finished last season 23-12, fourth place in the Big East Conference regular-season standings, and runner-up in the league tournament.

After receiving an at large bid to the NCAA Tournament, they defeated San Diego State in the first round before they lost in the second round to eventual national champion Kansas Jayhawks.

They will return five of the top seven scorers from that tournament run and many pundits have targeted them as the favourites to win the Big East.

“Fredrick is a versatile and an athletic front line player,” McDermott said at the time of his signing. “Having played at NBA Academy Latin America, he has been coached and trained at a high level. His motor and competitive spirit will allow for an immediate impact on our programme.”

King, a 6’10” frontcourt player out of the NBA Academy (Latin America), decided on the Blue Jays over the BYU Cougars, Georgia Tech Yellow Jackets, and Utah Utes.

“They stayed connected to me,” King told the Omaha World Herald of his recruitment, “We started to get a bond, and I had a good relationship with the coaching staff.”

King said he hopes to learn from and lend support to Bluejays starting centre and Big East Defensive Player of the Year - the 7’1” Ryan Kalkbrenner.

“(Kalkbrenner) is a great player. He’s bigger than everybody else,” King said, “I’ll come in after Kalkbrenner,” King said. “I’ll be able to help inside while also working on multiple skills.”

Creighton will open its preseason on October 30 against Drury and the regular season on November 7 against St. Thomas.

King, a former DW Davis and CI Gibson standout became the first Bahamian to ever receive an invitation to an NBA Academy and made the most of his opportunity in a relatively short time span.

He averaged 23 points and 12 rebounds per game on 77 percent shooting from the field at the event hosted by his NBA Academy Latin America programme in San Luis Potosi, Mexico.