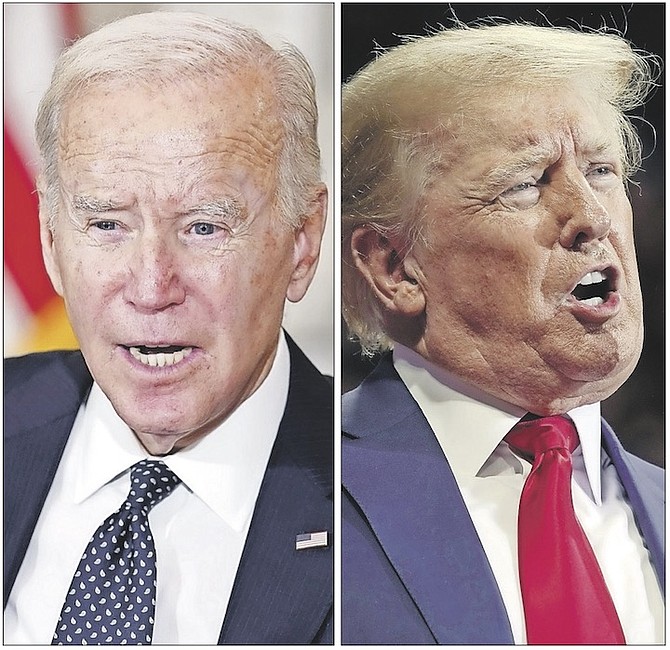 EVER since it became clear in the late spring and early summer of 2020 that Joe Biden would emerge from a crowded, desperate Democratic Party primary campaign as the challenger to Donald Trump’s bid for re-election, there has been much speculation about whether the fate of these two septuagenarians is inextricably linked.

After Biden won a rather convincing victory two years ago by, ironically, almost exactly the same Electoral College margin that Trump had achieved four years earlier, and Trump continued to deny and attempt to negate the outcome, the prospect of the first rematch since 1956 began to gain currency.

Back 70 years ago, Democrat Adlai Stevenson, the heir to a family political legacy and successful Illinois politician, was chosen by his party to oppose an overwhelmingly popular World War II hero and victorious commander of the Allied military forces that had vanquished Nazi Germany in 1945.

General Dwight Eisenhower, known to virtually everyone as “Ike,” had also served as president of Columbia University after the war. Both parties had tried to recruit Ike, and the GOP secured his allegiance. It was after Ike’s decision to join the Republican Party that the Dems turned to Stevenson.

Stevenson never really had much of a chance, either in 1952 or four years later in the rematch. In the first contest, Eisenhower prevailed by 442-89 in the Electoral College and won 39 of what were then the 48 states in the U.S. (Hawaii and Alaska didn’t become states until 1959). In 1956, Eisenhower racked up a huge win in the popular vote and captured 15 more electors and two more states.

Now, on the eve of what may be quite consequential mid-term American elections, Biden is assuring everyone that despite the fact that he will be 82 two weeks after taking office for a prospective second term and is already the oldest man ever elected to be the American chief executive, he has every intention of running again. Trump would be only a mere 78 years old if he ran again. Against virtually anyone else, Trump’s own age would be a huge issue.

And yet, the odds favour a Biden-Trump rematch, irrespective of what happens in the Congressional and state elections in under two weeks from today. Biden has said he will run again, and while he has attempted to be coy about his intentions, Trump clearly is aching for a chance to reclaim the White House. Both men exercise considerable, perhaps insuperable, power over the direction of their respective parties.

If Trump does decide to run again in 2024 and the Republicans again choose him to be their presidential nominee – both events seem statistically likely at this point – he will virtually ensure that Biden will be chosen by the Democrats, despite misgivings many of their most influential elders clearly have about his age and relative unpopularity.

Biden will be ensured of nomination if Trump runs for the same reason that he got the nod two years ago: He was by far the most likely Democrat to beat the bombastic New York tycoon. Biden would likely win again. And the example of Ike and Adlai Stevenson would be resuscitated endlessly.

But if Trump doesn’t run or isn’t nominated, watch out. There might not be Joe Biden on a national ticket two years hence, either.

Trump and Biden thus seem destined to be inextricably linked in future history books. But it is the potential link between Trump’s fate and that of Russian Vladimir Putin that seems more topical and, frankly, relevant at this point.

Trump is presently beleaguered. The January 6 commission consisting of sitting members of the House of Representatives has orchestrated an impressive and often riveting exposition of Trump’s villainous role in one of the greatest moments in American sedition. The question remains open and consequential as to what legal remedies may be found for Trump’s illegal incitement of that disastrous riot. The January 6 committee has now officially sought his testimony under oath and Trump has of course refused. The Department of Justice will have to figure out how to deal with this.

If that were not serious enough, Trump remains in the legal spotlight in several other venues, including in Atlanta where the local district attorney has been methodically building a case against Trump and others for attempted interference in the 2020 presidential election in Georgia.

So far, the case has ensnared, according to news reports, a United States senator, a congressman, a local Cadillac dealer, a high school economics teacher, the chairman of the state Republican Party, the Republican candidate for lieutenant governor, six lawyers aiding Mr. Trump, including former New York City mayor Rudy Giuliani, and, of course, the former president himself. The prosecutor’s belief seems to be that the fact that Trump & Company did all their misdeeds largely out in the open does not indemnify them from criminal prosecution.

The Georgia case is making headlines these days, because Atlanta’s DA has subpoenaed South Carolina senator Lindsay Graham for testimony about his role in the post-election skullduggery, and Graham has run to Supreme Court justice Clarence Thomas for help. Thomas, a Geoorgia native who administratively supervises Georgia cases on the high tribunal, promptly granted Graham indemnification from having to testify and, presumably, be compelled to tell the truth under oath. But Thomas’ relief may be short-lived and the case is separately gaining momentum anyhow.

Related cases in New York City may also turn out to be quite troublesome for Trump. The Manhattan district attorney is continuing his predecessor’s investigation into illegal perquisites allegedly granted to Trump Corporation executives.

New York’s attorney general, Letitia James, has meanwhile ramped up her own civil investigation into Mr. Trump’s financial statements, according to the New York Times. She recently filed a lawsuit that accused him, his children and his company of “staggering” fraud and misrepresentation of assets to evade taxes. The suit filed by Ms. James also seeks to bar the former president, as well as his children, Donald Jr., Eric and Ivanka, from ever running a business in the state again.

And there’s also the ongoing FBI investigation into Trump’s mishandling of classified documents he allegedly and improperly took with him into political exile in Florida after decamping from the White House in January 2020. Federal investigators have tried to manage the public and skillful pushback from Trump, who calls the whole investigation a “hoax” and a “witch hunt,” and from his platoon of lawyers.

Trump supporters claim that all these investigations, which are being conducted by elected and appointed Democratic officials, have the aim of barring Trump from ever running for office again. This hardly seems to be a claim altogether without merit: Democratic leaders would clearly be relieved if Trump were to be legally prohibited from ever running again.

But for the present and for the foreseeable future, there’s no likelihood of any of these suits really impacting Trump directly or calamitously. A majority of his endorsed candidates are going to prevail next Tuesday, and his influence on the GOP is not likely going to be eroded anytime soon.

What if Trump does run again in 2024? What does that mean for one of his avowed heroes, Vladimir Putin?

Putin has for nine months presided over a military and political disaster after unwisely invading Ukraine in a brazen land and power grab right under Western and NATO noses in Europe.

As he observes his Chinese counterpart rewarded with what looks like a lifetime license to preside over the world’s most populous nation, Putin may be feeling some heat over his Ukraine misjudgments.

Rumours of insurrection against Russian leaders have largely been fantasies for the past 100 years, but it is reasonable to wonder for just how long the Moscow military and civilian bureaucracy and political elite will tolerate such a humiliating and draining misadventure at the hands of a Ukraine they all disdain.

While Putin has by all accounts been careful to accumulate and maintain an impressive degree of control over Russian politics and his nation’s economic elite, Russians are nothing if not fiercely nationalistic. If the public opinion of Putin’s Ukraine war slips into a concern that defeat looms, he might really be in trouble.

If so, he could always point to his ties to a newly-reelected Trump.

Ohhhhhhhhhh hell NO!!!! This would be the worst-case scenario. These two clowns running again in '24???? I pray that does not happen. As a life long registered Republican... we MUST move away from Trump (and Biden). They both have had their opportunity in office. Now it is time for some younger and fresher leaders with some new ideas!!

It is one election at a time Charlie, and increasingly Democrats are coming to the realization that their party has moved to far from the center and is in jeopardy of losing control of the US Congress.

Joe Biden is a bumbling, stumbling, 40+ year politician who apparently doesn't know where he is most of the time. His legacy will be one of failed leadership and failed policies across the board.

As for Trump, time will tell. The numerous investigations undertaken by his obvious political enemies are indications of just how much they fear what he represents and understands. It is important to remember that Trump was at one time a Democrat, who was a major financial donor to virtually every prominent member of the Democrat party. Additionally, his knowledge and information concerning top American leaders associated with the infamous "Crossfire Hurricane" investigation is particularly alarming to the longtime political class of Washington DC, and has the potential to embarrass and expose prominent members of the both political parties, the FBI, and the DOJ.

His ability to fund raise is likely to be his best contribution to establishing a new and younger group of leaders going forward.