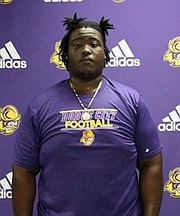 AMARIE Archer emerged as one of the top performers for the Dodge City Community College Conquistadors as they earned their first win of the season.

Archer finished with eight tackles (two for a loss) and 1.5 sacks in the Conquistadors’ first win of the season - a 28-14 triumph over Highland at Memorial Stadium in Dodge City, Kansas.

The Conqs improved to 1-2 and will be off next week before they return on September 24 to face Diamond Football Academy out of Texas.

Archer has recorded a tackle in each game in limited minutes thus far but was one of the breakout stars in Saturday’s win.

The 6’4”, 320-pound freshman defensive tackle is currently ranked second on the team in sacks and seventh in tackles.

Michael Tunsil, who recruited Archer to complete his prep career at Miami International Academy in Miami, Florida, said he has seen the growth and development in his game.

“Three years ago I was able to convince this kid to transfer from the state of Kansas to play high school football in South Florida,” Tunsil said. “He said he was a defensive tackle but we played him at offensive guard his junior and senior seasons.”

Archer, along with fellow Bahamian Mazio Randall, have been anchors on the Dodge City defensive line thus far in their freshman season.

Randall had two tackles against Highland and now has six on the season.

He is also the only member of the defence to record a fumble recovery thus far this season.

Randall had three tackles, one forced fumble and one fumble recovery against nationally ranked No.2 Iowa Western Community College Reivers.

“I’ve coached some good offensive teams during my coaching career.

“All Sun Belt, All MEAC and All Ohio Valley,” Tunsil said while the two were in their senior year of high school.

“I have three good senior offensive linemen that have all conference potential. Kaylin Smith, Mazio Randall and Amarie Archer,” he said.

Randall, 6’4” 300 pounds, played on both the offensive and defensive sides of the ball as a senior at Miami International.

He chose Dodge City in the Kansas Jayhawk Community College Conference of the NJCAA over offers from South Alabama in the Sun Belt Conference, Kentucky Christian and Webber International University in the NAIA.