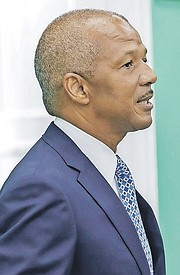 Days after being visited by Police Commissioner Clayton Fernander, who allegedly inquired about some kitchen cabinets, Bishop Mills said “someone” had entered his church to take pictures of items being stored there with ill intentions.

However, those items in his church were either bought or donated from NGOs post-Dorian, he said.

Other housing supplies that were taken by police, he added, were only there for storage purposes for the DRA when the Minnis administration was in office.

This was also confirmed by former Prime Minister Dr Hubert Minnis yesterday, who said officials sought Bishop Mill’s help because his church was one of the few structures that withstood Hurricane Dorian.

“So I must congratulate Silbert Mills and his church and his church members in the excellent job they have done in terms of assisting individuals, but, yes, many supplies were sent there to accommodate people.”

He also insisted that no wrongdoing has been done, adding he could vouch for Bishop Mills’ character.

Free National Movement leader Michel Pintard also weighed in on the situation yesterday, saying he was disappointed over what had taken place with respect to the Abaco resident.

He accused the government of “savaging” the religious leader and trying to silence him after his recent report on the dome demolition exercises on the island.

“They’re now savaging Silbert Mills - a respected pastor in the Commonwealth of the Bahamas - and they have no less than the commissioner of police go in and question a minister. Murders are happening in The Bahamas, a whole series of dastardly acts against children and we have major officers talking to a pastor about generators and their websites savaging them,” Mr Pintard said.

“Something is wrong with this. So they are looking to silence the free press. His scene in their mind is to report on the dome destruction which John Pinder — their member of Parliament for South and Central Abaco — had a problem with which I’m sure the member of Parliament for north had a problem with. Most of their people in Abaco had expressed concern about this inhumane act that they carried out.”

However, Mr Laroda, who has responsibility for the DRA, dismissed the idea that the government was targeting Bishop Mills who he said he knew to be an honest person.

“I totally reject that argument,” Mr Laroda told reporters. “This government hasn’t targeted anybody. I don’t know where the source of the information came from that led to the conversation between the parties. In all that has been said, I have seen or heard nothing to suggest that that is the case.”

Meanwhile, DRA officials have said that the recent recovery of its commercial assets are a part of its ongoing internal investigations from its financial audit.

“Investigations will continue,” the DRA added. “We remain committed to making our best efforts to recover any and all misappropriated resources of the DRA. We are grateful to the Royal Bahamas Police Force for their determined effort to locate any items that may be missing, housed, or stored at any location without proper documentation or approval.”

“This matter is a part of a much larger investigation. Once investigations are completed, we will provide a detailed statement to the general public.”

Not once is it considered to give the top job to a resident of the island most affected. Slap in the face, the face dun mash up from all the slapping up