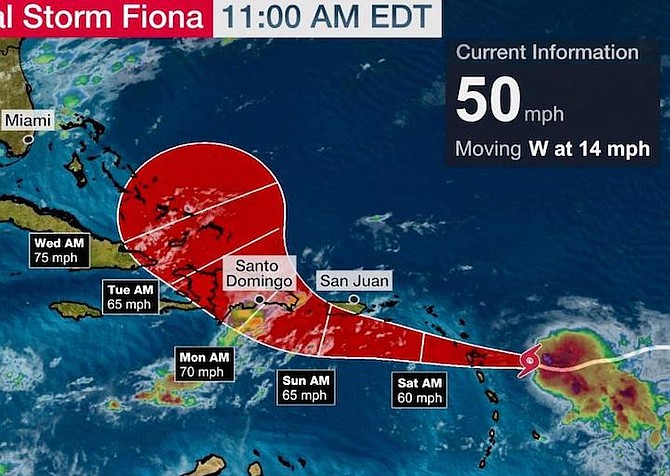 LOCAL forecasters are advising the public to be vigilant as a new weather system heading for the southeast Bahamas gets closer.

Since Wednesday evening, Tropical Storm Fiona has been moving at about 805 miles east of the Leeward islands and moving westward at under 14 mph. Forecasters said that maximum sustained winds are presently about 35 miles per hour, but some intensification in that speed should be expected.

Department of Meteorology duty forecaster Ian McKenzie told The Tribune yesterday that based on the National Hurricane Centre’s predictions, it is expected for marine conditions to deteriorate once the storm moves off the Dominican Republic’s northern coast.

“So then the storm will be able to generate swells across our area, particularly the southeast Bahamas, Inagua, and Turks and Caicos as well. And some of the swells should penetrate into Mayaguana, Crooked Island, and Acklins area from early to mid-Monday morning.

“In terms of precipitation, the more intense portion of the system, most of the intense precipitation and convection, that’s more thunderstorm activity would be associated with the northeast quadrant, which will be out in the open water away from our area. So we’re looking at pretty gusty winds, squally rainfall conditions at this time. Based on the current track, now this could change.”

Although the weather system is being tracked actively, its status could change.

Mr McKenzie said the hurricane season has been relatively quiet based on the projected forecast, however, the country should remain cautious especially in the southeast.

He continued: “In terms of the southeast Bahamas we are asking residents to continue to monitor the progress of this system extremely closely, and also to be mindful that we are now in the peak of the season. And it only takes one storm to really devastate us. So although the season has been relatively quiet based on the projected forecast, we’re still in the hurricane season. And, you know, again, we are advising people to remain vigilant and use this time to check up on any hurricane preparations that they may not have done so far and revisit any hurricane preparations plants insurance, you know, just pretty much keep themselves updated and in tune, because the season is far from over.”

Additionally, the Consumer Protection Commission (CPC) shared some tips for preparing for a hurricane.

“ Have an evacuation plan that includes knowing the location of designated shelters in your area, and the safe keeping of valuable documents,” the press release said.

The CPC also urged people to pay close attention to alerts from NEMA during this hurricane season.

Don't bet on cruel Davis cancelling his expensive trip to the UK to attend the Queen's funeral. No possible hurricane is going to keep him from hobnobbing with other dignitaries!