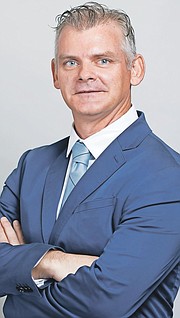 AML Foods plans to invest $2m in 2023 upgrades to its existing Solomon's Fresh Market stores and Cost Right Freeport as it strives to be a "catalyst" for the revival of that city's downtown area.

Gavin Watchorn, the BISX-listed food retail and franchise group’s president and chief executive, told Tribune Business in a recent interview it has an extensive programme of store enhancements besides its $17m purchase of the Solomon's SuperCentre building that will facilitate Cost Right's relocation from Nassau's Town Centre Mall.

With the former Exuma Markets and Solomon's Lucaya already remodelled, he added that the two Fresh Market sites - at Harbour Bay and the Old Fort Bay Town Centre - as well as Cost Right Freeport are next in line for transformation next year.

"Cost Right Freeport and the two Fresh Market stores will see some renovation, mainly around the replacement of equipment; refrigeration equipment for the chilled and perishable departments," Mr Watchorn told this newspaper. "It's going to be approximately another $2m in those upgrades."

Mr Watchorn, meanwhile, said AML Foods' margins had been "squeezed by a couple of percentage points" during the first quarter of its 2023 financial year to end-July after the food and franchise group elected not to pass on the full extent of supplier price increases to customers.

"We appreciate these are challenging times," he added. "Inflation is impacting us all, whether at home or in business, and you're making decisions around inflation. We've definitely seen some changes in customer behaviour. What they're seeing in the US, we're seeing similar behaviour here, customers changing brands, changing pack sizes, doing what they need to maintain their budget and what they're spending on.

"They've [margins] been squeezed by a couple of points. It's expected. As a company we feel secure and well positioned to manage through this period, and we believe we're setting the lead in providing value to our customers." Mr Watchorn said AML Foods' new customer loyalty initiative, My Solomon’s Smart Rewards, had already provided "close to $150,000" in collective savings for shoppers separate and apart from the group's regular specials and discounts.

As for Solomon's new downtown Freeport store, which will employ 65 full-time staff and take group-wide employment to around 850, he declined to give an opening date due to the frequent construction and supply chain-related delays experienced to-date although he pledged it would occur before year-end.

"We do have a date pencilled in internally. We're very confident that store will open before the end of the year," Mr Watchorn said. "Given the delays that have happened on construction and equipment so far, I won't give the date. We're not expecting any further delays, and will announce shortly when that store will open."

Asserting that Solomon's return to the area had drawn an "amazing" response from Freeport residents and persons in western Grand Bahama, he added: "It's no secret that downtown Freeport has fallen on some tough times and needs some revitalisation, and AML Foods is one of the first companies going in there spending money to revitalise downtown, ourselves and the developer.

"We hope that serves as a catalyst for other businesses to come in, invest in downtown Freeport and make it the destination it was some years ago." Of AML Foods' $3.5m investment in the new store, Mr Watchorn said it had strived to ensure as much of the construction work as possible went to Grand Bahama contractors.

"We will have a lot of folks in Freeport, over 200 by the time we open the store," he added. "A lot of those staff are already in training in our current stores. We're using technology to drive efficiencies."

In Nassau, Cost Right’s relocation from the Town Centre Mall to its new home before year-end 2023 will slash costs and “create a lot of efficiencies” by eliminating the rents it is paying for two key New Providence stores.

By acquiring the 80,000 square foot portion of the East-West Highway building that presently houses the Solomon's SuperCentre format, AML Foods will become a real estate owner and thus be able to reallocate current lease expenses. The SuperCentre format will be dropped, with Solomon’s converted to the neighbourhood food stores that AML Foods is rolling-out nationwide, helping to make way for Cost Right.

Explaining that the “streamlining” better aligns the Solomon’s store with the direction AML Foods is taking the brand in, Mr Watchorn previously told this newspaper that the general merchandise and clothing presently sold by the SuperCentre will be switched to Cost Right.

Promising that all staff at both impacted stores will be retained, and that AML Foods will “find a home” elsewhere in the group for any not required at East-West Highway, he added that the property purchase will also enable it to improve “standards” at both outlets.